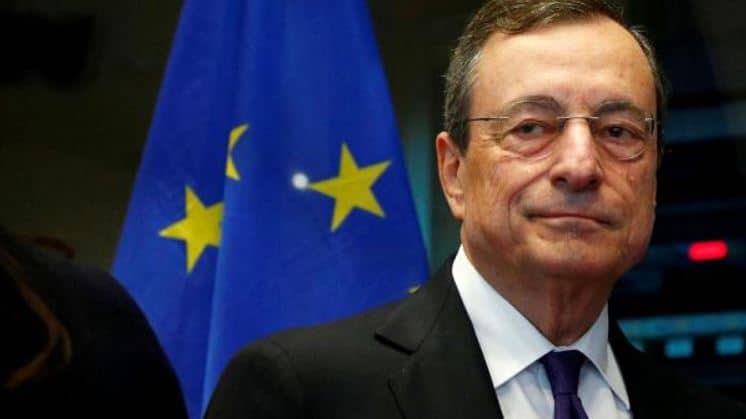 The horror of German savers – or the saviour of the Eurozone? Mario Draghi has polarised as President of the ECB. Zero interest, penalty interest for banks, bond purchases – Draghi pulled out all the stops in the fight against the economic downturn. On Thursday he gave his farewell show – and drew a positive balance of his presidency in a good mood.

Draghi himself is at peace with himself. “I feel like someone who has tried to fulfil the mandate in the best possible way,” he said at his last press conference as President of the European Central Bank (ECB) on Thursday in Frankfurt. In 2017 the Governing Council of the European Central Bank (ECB) prepared the exit from the ultra-loose monetary policy. “But then the conditions changed. And that’s why we had to change our course again.”

Draghi keeps the Prussian pimple cap
The Italian took office on 1 November 2011 with the promise of guaranteeing stable prices in the tradition of the Deutsche Bundesbank. The “Bild” newspaper promptly gave “Super Mario” a helmet to remind the former head of the Italian central bank of Prussian virtues. Today the paper denounces “Graf Draghila”, who sucks the accounts of German savers dry. Draghi stressed on Thursday that he would keep the pickle cap – for once partly in German: “There is an old German proverb: ‘A gift is a gift’. I intend to keep it.”

Especially in Germany Draghi’s legacy is viewed critically. “For decades, we have taught Germany’s children that saving makes sense because you have to make provisions for bad times in crises. They are sharpening this culture,” Sparkasse President Helmut Schleweis criticised in an open letter to Draghi in the summer of 2019. “All this cannot end well in the long run.” Banks and insurance companies are feeling bullied and robbed of their earnings.

The former Jesuit student Draghi was unimpressed by the constant criticism: “Our monetary policy was successful,” he decided in the summer of 2017. And in June 2019 Draghi summed up – as so often with a stoic face – that the ECB had shown how flexible it could act in difficult times.

“Never give up!”
“Unfortunately, everything that has happened since September has shown in excess that the Governing Council’s determination to act was justified,” Draghi said in Frankfurt on Thursday. “If there is one thing I am proud of, it is that we have always pursued our mandate. Never give up!”

ECB sticks to penalty interest and bond purchases
Draghi’s term as President of the ECB ends with the low interest rate being consolidated. At its last meeting, chaired by the Italian, the Governing Council of the European Central Bank (ECB) reaffirmed its ultra-loose stance, which had been further tightened in mid-September. With a key interest rate at a record low of zero per cent, negative interest rates of 0.5 per cent for parked funds from banks and fresh billions for the purchase of government bonds, the ECB wants to help the economy and inflation in the eurozone to leap forward.

On 31 October Draghi will stop as head of the ECB. He did not tell the journalists what he would do afterwards. “Ask my wife,” he recommended to the curious representatives of the press. On Monday (28.10.) in Frankfurt Draghi is officially bid farewell at a ceremony with a lot of political celebrities.

Bonjour, Madame Lagarde!
On 1 November, Christine Lagarde, the former head of the International Monetary Fund (IMF), will be the first woman to take up her post at the ECB. The 63-year-old Frenchwoman takes over a split ECB Governing Council. “The shock waves of the September resolutions still echo through the corridors of the ECB building,” writes Carsten Brzeski, chief economist at ING Germany. Several national central bank governors had publicly distanced themselves – above all from new bond purchases. Bundesbank President Jens Weidmann, for example, said that the ECB had “overstepped the mark”. ECB Executive Board member Sabine Lautenschläger declared her early resignation from the six-member executive body on 31 October 2019. She had repeatedly expressed criticism of bond purchases, which are to be resumed with 20 billion euros per month from 1 November – for an indefinite period.

As Lautenschläger’s successor, the German government, which has the right to propose in this case, has nominated Isabel Schnabel, the “economic wise man”. The Italian Fabio Panetta is also to join the Executive Board of the ECB as the successor to the Frenchman Benoît Cœuré, whose eight-year term of office ends on 31 December 2019.

Critics hope for new impetus
After her nomination, Lagarde herself had made it clear that she considered a very loose monetary policy necessary for the foreseeable future. After years of low interest rates, savers and bankers still hope for new impulses. “The monetary policy of the European Central Bank has stabilised the eurozone for a long time. In the current situation, however, the damage of an expansive monetary policy now outweighs its benefits,” summed up Helmut Schleweis, President of the German Savings Banks and Giro Association (DSGV).

Ifo President Clemens Fuest warned against speculative bubbles in view of fresh ECB billions for bonds. “The ECB is trying to use the crowbar to raise the inflation rate,” commented Fuest. During his term of office Draghi had “accepted that the ECB would exceed its mandate and assume a fiscal policy role”.

The main objective of the monetary authorities is to keep prices stable. In the medium term, the ECB is aiming for an inflation rate of just under 2.0 per cent for the currency area with its 19 countries. That is far enough away from the zero mark. Because permanently low prices are regarded as a risk for the economy: companies and consumers could then postpone investments – in the hope that it will soon become even cheaper.

Is the ECB independent?
Critics argue that the central bank is using bond purchases to finance banned public spending and slow down political reforms because governments rely on cheap central bank money. ZEW President Achim Wambach praised Draghi’s “successful crisis management”. On the other hand, the Draghi era will be remembered with negative interest rates and the expansion of government bond purchases. “In addition to criticism of the monetary policy measures, Draghi’s time also saw increasing criticism of the ECB as an institution and thus of its independence. This increasing loss of confidence is problematic,” writes Wambach.