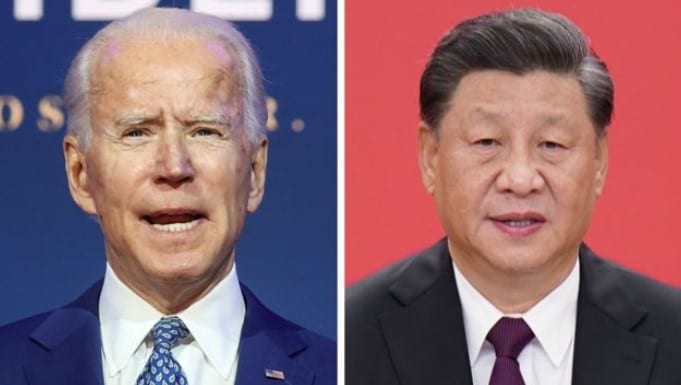 In New York, investors piled into the stock market today, rewarding strong economic momentum. The improved US relationship with China also went down well with investors.

There are several reasons for the relatively better performance of the DAX and the other European markets. Unlike in the USA, the party of cheap central bank money continues unabated in this country, as ECB chief Christine Lagarde explicitly confirmed only yesterday. The ECB intends to keep interest rates at zero per cent for at least the whole of 2022.

The bank is thus uncoupling itself from the US Federal Reserve (Fed), which is much further along in the interest rate cycle and is now starting to put on the brakes. This, in turn, strengthens the greenback and weakens the euro. The export-dependent German economy may find it hard to believe its luck at the moment – after all, products “Made in Germany” are becoming cheaper in the dollar area.

The US stock markets rose for the second trading day of the week.

On the corporate side, the focus of investors on Tuesday was on Home Depot with figures for the past quarter and Walmart with an increased profit forecast. In addition, the focus was on US electric car manufacturer Tesla, which the big bank JPMorgan issuing.

In addition to new corporate results, investors looked at a series of equally new economic data that highlighted the high growth of the US economy. Investors were also relieved about the video summit between US President Joe Biden and China’s leader Xi Jinping. Biden stressed that competition with China should not degenerate into conflict, and Xi also expressed positive views.

Meanwhile, the major Asian indices could not find a common denominator. In Japan, the benchmark Nikkei index was 0.11 per cent higher at 29,808.12 points at the closing bell, while the Shanghai Composite closed 0.33 per cent lower at 3,521.79 points on the Chinese mainland, while the Hang Seng was up 1.27 per cent at 25,713.78 points in Hong Kong.

The buying mood was curbed by the corona crisis, which picked up speed again. US President Joe Biden’s virtual meeting with Xi Jinping also remained in focus. Investors were waiting for news on what the two leaders talked about. The Chinese government has already said that the meeting was “wide-ranging, in-depth, frank, constructive, substantive and productive”.

Investors on the European stock exchanges continued to push the markets higher. The EuroSTOXX 50 rose slightly at the opening and remained in the profit zone throughout the day. It reached a new 52-week high at 4,404.94 points and finally went into the evening 0.35 per cent stronger at 4,401.49 index units.

The leading German index, Dax 40, was also able to climb to new highs in Tuesday’s trading. During the day, the German benchmark index made gains and broke through the 16,200 point mark. At its high for the day, it climbed to 16,266.26 points. In the end, the index gained 0.61 per cent to 16,247.86 points. The TecDAX started somewhat higher and significantly expanded its gains in the day. At the end of today’s trading session, it was up 0.68 per cent at 3,921.47 points.

The weak euro, which tends to benefit the export-oriented German economy, had a supporting effect. In addition, slight signs of détente between the USA and China provided some relief. Both US President Biden and the Chinese government were positive about the talks at the video summit.

The euro remained under pressure on the foreign exchange market today. Robust US economic data boosted the dollar and pushed the euro to as low as 1.1319 US dollars, its lowest level since July 2020.

Oil prices rose moderately today, but there were no major price movements for Brent crude and WTI light oil. For days, the markets have been speculating whether the US government would release part of its strategic crude oil reserve and act cautiously overall.

Cryptocurrencies came under heavy selling pressure during the Asian and European sessions. The downward trend started during late US trading the previous day and ultimately saw Bitcoin dropping as low as $58,500, taking all altcoins down with it. At the end of the day, BTC was trading at $59,700, down 3.7 per cent, while Ethereum dropped 4.5 per cent to $4,192. Binance Coin was hit even harder, posting a slump of 7.6 per cent to $585, Solana dropping 5.5 per cent to $217, and Polkadot falling 5.4 per cent to $40.20. Cardano and XRP lost 4.4 per cent each, sitting at $1.87 and $1.10, respectively.

The number of employed people in Germany rose slightly in the third quarter of 2021, but it remains below the pre-crisis level. As reported by the Federal Statistical Office, around 45.1 million people in Germany were employed in the third quarter. Compared to the previous quarter, this was 169,000 persons or 0.4 per cent more, seasonally adjusted.

The economy in the eurozone grew solidly in the third quarter of 2021. As the statistics authority, Eurostat announced in a second publication, the gross domestic product (GDP) rose by 2.2 per cent compared to the previous quarter. This confirmed the first estimate from 29 October, which economists surveyed by Dow Jones Newswires had also expected. For the entire year, GDP growth was 3.7 per cent, also confirming the first publication.

Meanwhile, October brought retailers in the United States a surprisingly large increase in sales. Revenues increased by 1.7 per cent compared to the previous month, according to the Department of Commerce. Economists had only expected an increase of 1.4 per cent. Apparently, many Americans started their Christmas shopping earlier this year – also concerned that items might be out of stock later due to widespread supply bottlenecks.

In contrast, the strong inflationary pressure in the USA continues. Import prices rose by 10.7 per cent in October compared to the same month last year. At the same time, US exporters raised their prices at a record pace of 18.0 per cent in October. Given the rapidly rising prices, US monetary watchdog James Bullard from the Fed urges an interest rate turnaround as early as possible.