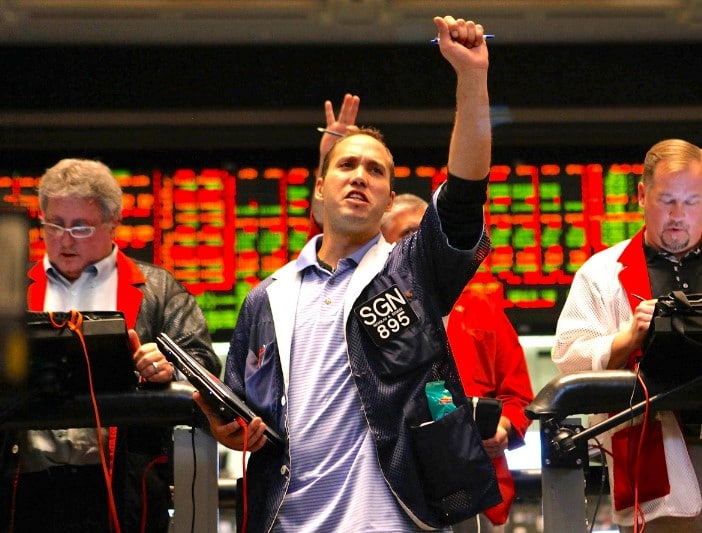 Above all, the lack of investment alternatives and the fear of missing out is once again driving investors into equities. Bargain hunters, in particular, have returned to the trading floor and continued to drive prices up today. Worries about price increases, rising yields on the bond market or even corona and the economic recovery are retaking a back seat for the time being.

While the ongoing reporting season in the USA is providing fresh impetus and keeping the stock markets at a high level, investors in Europe are hoping that the ECB can breathe new life into the stock markets.

A rather uneventful July meeting was expected until ECB chief Christine Lagarde announced that the coming meeting would be significant. Among other things, new information on the direction of monetary policy was announced to set a new course for the coming years.

Among other things, encouraging company results from Coca-Cola and Verizon attracted investors back to Wall Street.

The Dow Jones rose slightly at the start and was subsequently able to extend its gains, closing 0.83 per cent stronger at 34,798.00 points. The NASDAQ Composite opened marginally firmer too and ended the session 0.92 per cent higher at 14,631.95 points.

Concerns about the corona and the economic recovery are still in the back of investors’ minds. Today, however, the focus was more on the start of the reporting season. Some positive company results and hopes for a good and successful quarter had recently made market participants more optimistic. The mood on the stock markets also remained good recently because investors see few other opportunities. After all, the yields of US government bonds had also fallen further and further recently, even if they were able to recover a little recently.

The Asian stock markets did not find a common direction in the middle of the week. However, the prevailing trend was upwards. In Tokyo, the Japanese benchmark index Nikkei 225 ultimately went up 0.58 per cent to 27,548.00 points. Meanwhile, on the Chinese mainland, the Shanghai Composite gained 0.73 per cent to 3,562.66 points. Only the Hang Seng index in Hong Kong lost 0.13 per cent to 27,224.58 points.

Asian markets followed strong cues from the US, where a recovery had begun the previous day. Support also came from Japan, where exports had rebounded sharply. Worries about the corona situation had receded somewhat into the background after the last few trading days.

The mood on the European stock exchanges was optimistic at midweek. The EuroSTOXX 50 already showed a plus of 0.44 per cent at the opening of trading, which is extended further with subsequent strength. The leading European index ultimately ended trading with a plus of 1.78 per cent to 4,026.68 index points.

Positive indications from the US stock markets also helped the DAX to recover further. The German benchmark index closed 1.4 per cent firmer today at over 15,400 points. This almost makes up for the setback on Monday. The TecDAX also started the day in the profit zone and closed 0.69 points firmer at 3,594.82 points.

The USA and Asia provided predominantly positive signals. After the losses at the beginning of the week, the markets there have already recovered. The reporting season also continued to gain momentum. Sartorius, Software AG and ASML, among others, presented their figures.

One day before the eagerly awaited ECB meeting, the euro recovered somewhat on the foreign exchange market. In the evening, the common currency overcame the 1.18 dollar mark. In the morning, it had temporarily fallen to 1.1752 dollars, the lowest level in three months.

Supported by the friendly mood on the financial markets, oil prices have recorded further price gains today. A barrel of North Sea Brent cost 71.97 US dollars in the evening, a full 2.62 dollars more than the previous day. The price of West Texas Intermediate (WTI) even rose by 2.96 dollars to 70.15 dollars.

Meanwhile, the gold price declined further, losing more than $5 on the daily chart to $1,802 per troy ounce.

Cryptocurrencies rebounded strongly, and especially altcoins that had been sold off in the past days recovered often by more than 10 per cent. Bitcoin rose 8.5 per cent to $32,100, while Ethereum gained 12.5 per cent and recaptured the $2,000 round-mark. XRP increased by 9.3 per cent to $0.57, while Cardano added 13 per cent to $1.18. The biggest gainer among the top digital assets was Uniswap which rose 17 per cent to $16.50.

Exports in Japan continue to recover rapidly from last year’s Corona shock. Tailwinds came from exports of cars and car parts and chip-making equipment, which are currently in high demand, especially from China, given the global semiconductor shortage. The value of exports in June rose by 48.6 per cent compared to the same period last year, which was marked by the corona crisis, the Japanese Ministry of Finance announced in Tokyo on Wednesday. This means that exports increased almost as much as in May, when they had climbed by nearly half, and thus more strongly than ever since 1980. Economists had expected exports to continue to rise sharply in June, but on average, the forecasts were lower than the actual figures.