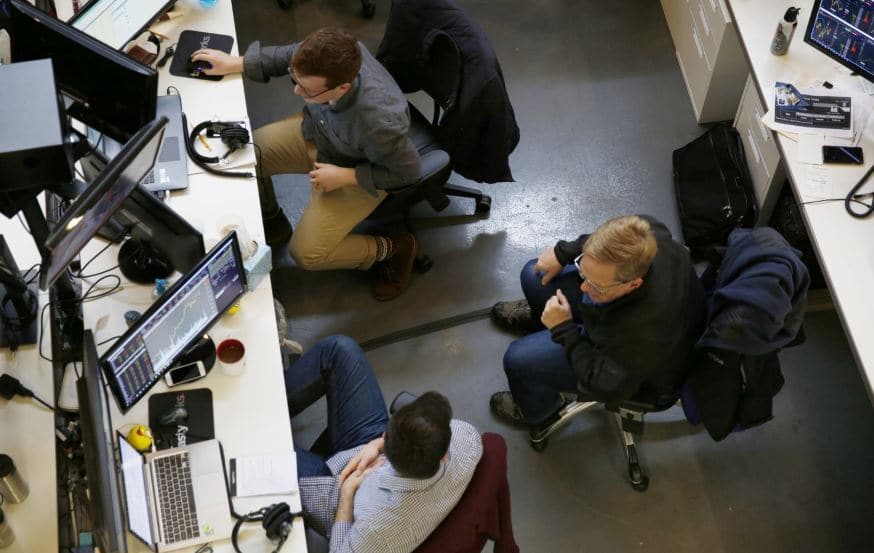 The tiresome issue concerning the trade dispute between the two major powers, the USA and China, is spreading more and more nervousness. The markets react accordingly as more and more investors gradually lose their patience.

No wonder investors on Wall Street are gradually getting cold feet as well. The Dow Jones index was bobbing along without any orientation and was 0.1 per cent weaker at 27,618 points at the close of trading in Frankfurt. A buy recommendation for Apple increased the share price of a good one per cent.

Analysts’ comments at Nike also had an impact on share prices in the Dow. The shares were the front runners with an increase of 1.6 per cent after Goldman Sachs placed them on a list of, particularly promising investment recommendations.

In the Asian markets, hopes of an early end to the trade dispute prevailed, which boosted the stock markets in the Far East.

The EuroSTOXX 50 gained initially on Thursday after a restrained start but fell back below the zero line in the day. It ended trading at a discount of 0.32 per cent to 3,648.13 index units.

The more positive tone in the trade conflict between China and the USA since Wednesday led to a strong recovery on this day and remained an issue on Thursday. However, the market is looking for direction, according to the market.

The Dax 30 opened with little change and was also looking for direction afterwards. After changing its omen several times, it ultimately recorded a minus of 0.65 per cent at 13,054.80 points. The TecDAX lost its initial gains during the trading day and closed 0.16 per cent lower at 3,037.12 points.

The euro rose slightly on Thursday in the forex market. However, the 1.11 dollar mark has not yet been reached. The European Central Bank (ECB) set the reference price at 1.1094 dollars.

OPEC and other oil-producing states are tightening their long-standing production brakes to keep oil prices high. On Thursday and Friday, representatives of both camps (OPEC+) will discuss new production quotas in Vienna. The proposed reductions are one of the largest in years. The meeting in Vienna has already left its mark on the oil markets. The North Sea variety Brent increased in price by 0.9 per cent to 63.56 dollars per barrel.

The gold price hardly changed on Thursday and closed only slightly lower at $ 1.475 an ounce.

Cryptocurrencies rose slightly on Thursday, most clearly the number 3 of the top digital assets XRP with over 3 per cent to $0.2230. The Bitcoin rose by about 2 per cent to $7,440 and Ethereum just under 2 per cent to $149.

France is preparing with ample security for a massive strike that could paralyze the entire country. In the capital alone, 6,000 police officers will be deployed today, announced Paris police commissioner Didier Lallement. Numerous trade unions have called for a ‘general strike’ against the pension system. Trains, metro, bus – everything should be at a standstill as far as possible. But also at schools, in the public service, in hospitals or the judiciary, the work is to be stopped. The authorities again expect violent riots during demonstrations in Paris. The effects are also likely to be felt on rail and air traffic in Germany.

The German car manufacturer BMW is suing the two suppliers Valeo and Denso for allegedly illegal price-fixing. A BMW spokesman confirmed a complaint, previously reported in the “Handelsblatt”. BMW accuses the French Valeo and the Japanese Denso of having agreed on prices for components for air conditioning systems and wants damages amounting to 141 million euros.

Global digital currencies such as Facebooks Libra must prepare for some resistance in Europe following a joint statement by EU finance ministers and the EU Commission.

All measures are on the table to prevent uncontrollable risks posed by certain global cryptocurrencies, according to the text published in Brussels on Thursday. No global digital currency should be launched in Europe as long as legal, regulatory and supervisory issues remain unresolved.

Among other things, regulators and politicians see open questions regarding measures against money laundering and terrorist financing. At the same time, they fear a possible destabilization of the established financial system if large amounts of money are exchanged in Libra and back. After the criticism, renowned partners from the financial sector such as MasterCard, Visa and PayPal withdrew from the Libra project.

France’s Finance Minister Bruno Le Maire recently warned urgently against Libra and said that under the development of the current condition in Europe could not be allowed. However, the formulation of the Brussels Declaration now also reflects more moderate views.

Summiq cancels IPO for this year

In the absence of interest, the supplier of renewable energies has to cancel its IPO. The targeted proceeds of between 75 and 100 million euros, which would have been necessary to implement the business plans by the end of 2020, had not been achieved within the set subscription period.

Management has therefore decided not to go public this year and is looking at alternative financing options, the company said in a statement distributed on Thursday evening.