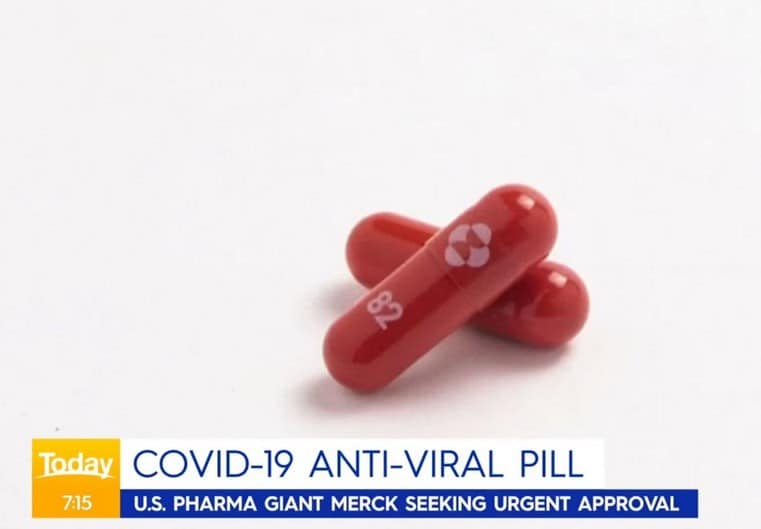 Rising energy prices, power shortages, supply chain disruptions and rising inflation made investors nervous last trading week. However, shortly before the weekend, there was still a good end – at least on Wall Street.

The reason for this was news that the US pharmaceutical giant Merck raised hopes for an anti-corona drug.

According to the companies, the antiviral agent Molnupiravir from Merck and Ridgeback Biotherapeutics showed a halved risk of being hospitalised or dying from covid in the interim analysis of a final phase III study. Merck is now seeking emergency approval for the pill in the US. Merck shares shot up by around 10 per cent. The shares of vaccine manufacturers Moderna and BioNTech, on the other hand, fell by more than 10 per cent.

In addition, positive economic data came from the USA, where the sentiment in the US industry brightened in September.

After initial weakness, the US stock markets went into the weekend with gains. The US leading index Dow Jones was friendly at the end of the weekend and ultimately rose by 1.43 per cent to 34,326.46 points. The NASDAQ Composite also trended upwards and climbed by 0.82 per cent to 14,566.70 points.

Despite numerous ongoing negative factors, the US stock markets managed to hold their gains before the weekend. The market cited the success of the US pharmaceutical giant Merck & Co’s trial of its virus-inhibiting drug.

The Tokyo stock exchange fell sharply on Friday. Meanwhile, there was no trading in China due to the holiday. In Japan, the Nikkei benchmark index closed with a loss of 2.31 per cent at 28,771.07 points. The stock exchanges in Shanghai and Hong Kong were closed on Friday for the bank holidays. In Shanghai, the holiday break, also called “Golden Week”, continues up to and including next Thursday. Last on the Chinese mainland, the Shanghai Composite had risen 0.90 per cent to 3,568.17 points on Thursday. In contrast, Hong Kong’s Hang Seng had slipped 0.36 per cent to 24,575.64 points.

Investor sentiment was weighed down by disappointing economic data from the region and negative cues from Wall Street. They were also concerned about problems in supply chains and gaps in energy supply around the world.

In Europe, the positive Merck news came too late. Here, the largest stock markets recorded losses. The EuroSTOXX 50 started slightly lower and subsequently moved slightly into negative territory. It went into the weekend 0.32 per cent weaker at 4,035.30 points.

The DAX opened Friday’s trading with a substantial loss and then even fell below the round mark of 15,000 points. In the further course, it even managed to return to the zero line in the meantime, but ultimately fell back again by 0.68 per cent to 15,156.44 points. The TecDAX also fell significantly after a weaker start and closed 1.9 per cent lower at 3,672.55 points.

Wall Street also provided weak guidance. The budget poker in Washington and the current supply bottlenecks in the economy had unsettled investors there the previous day.

The euro can do little to counter its recent losses against the dollar. The European single currency was trading slightly higher at 1.1598 dollars before Wall Street closed, falling to 1.1562 dollars yesterday. This was the lowest level since July 2020.

Oil prices rose slightly again on Friday. In the evening, a barrel of North Sea Brent cost 78.60 US dollars, 27 cents more than the previous day. The barrel price for WTI light oil rose by 16 cents to 75.19 dollars.

The increasing risk aversion of investors is also reflected in the commodities market: the “safe haven” gold made up a lot of ground yesterday and rose in price by almost two per cent. Today, a troy ounce of the precious yellow metal was quoted 0.2 per cent higher at 1,759 dollars.

German industry continued to suffer from supply bottlenecks in September. The purchasing managers’ index examined by IHS Markit in this sector fell to 58.4 from 62.6 points versus a reading of 58.5 expected. In the first publication, a value of 58.5 was determined.

Business activity in the eurozone‘s manufacturing sector continued to fall in September. The Purchasing Managers’ Index (PMI) for the sector fell to 58.6 points from 61.4 in the previous month, according to a second release by the IHS Markit Institute. The first release showed a reading of 58.7 points, which economists had expected to be confirmed.

Price pressures in the eurozone increased more than expected in September. The annual inflation rate rose to 3.4 per cent from 3.0 per cent in the previous month, Eurostat, the statistics authority, said in an initial report. This is the highest level since September 2008. Economists surveyed by Dow Jones Newswires had predicted only 3.3 per cent. Energy prices, which had plummeted in the previous year due to the consequences of the Corona pandemic, provided the main boost.

US consumer spending grew in August, signalling that the economic recovery in the US is gaining momentum. Compared to July, spending increased by 0.8 per cent, according to the US Department of Commerce. Economists surveyed by Dow Jones Newswires had expected a 0.7 per cent increase. A revised minus of 0.1 per cent (preliminary: plus of 0.3 per cent) was cited for July.

US industry activity declined in September compared to the previous month. IHS Markit’s Purchasing Managers’ Index for the sector fell to 60.7 from 61.1. Economists had predicted a reading of 60.5. In the first publication, a value of 60.5 had also been determined.