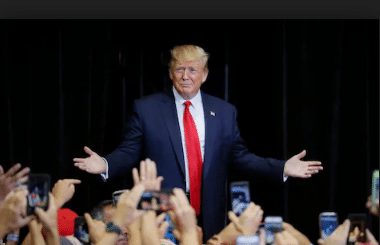 As often, it all started with a tweet: Donald Trump announced yesterday a fresh round of 10% tariffs on the remaining $300 million of Chinese goods to the US.

Immediately after the announcement, the markets went crazy. While safe-havens like gold and silver went gangbuster and rose in value sharply, US stocks fell dramatically within minutes. At the end of yesterday’s trading day, the Dow Jones had dropped by 1.1 per cent to 26,583 points. The broader S&P 500 lost 0.9 per cent to 2,953 points. The Nasdaq technology exchange index fell by 0.8 per cent to 8,111 points. The prospect of further tariffs placed a particularly heavy burden on export companies such as Boeing, the iPhone company Apple and chip manufacturers such as Intel.

The gold price is currently trading around $1,433, while oil prices were dropping sharply – a bad sign for the economy as a whole. The two main types of oil, Brent and WTI, lost over six per cent during yesterday’s wild US trading session.

Trade gold with the best Gold CFD Brokers of 2019

Markets in Asia and Europe are falling as well

The leading index of the Shanghai Stock Exchange, the SSE Composite, is currently falling by 1.7 per cent. The Japanese Nikkei is 2.6 per cent lower in Tokyo shortly before the close of trading.

The fear of a global economic dip is not stopping at the European stock markets either. The export-oriented German economy would be hit particularly hard. Against this backdrop, the Dax is likely to start the last trading day of the week with a massive discount. The 30 German blue chips are currently valued at 12,030 points – a minus of 1.8 per cent.

The euro is currently quoted at $1,1081. It was only yesterday morning that the European single currency fell to 1.1027 dollars, its lowest level in two years.

After Thursday’s Federal Reserve meeting, traders will be looking with interest at today’s US non-farm payroll (NFP) data. Fed Chair Powell gave the market a shock, ruling out a rate hike trend which sent the USD soaring and stock indexes tumbling on Thursday.

There are two possible outcomes for today’s data release:
Either, NFP beats expectations reinforcing strong employment. This could have a negative effect on stocks which have been previously building due to rate cut hopes. This could also give the USD a boost nailing the rate cut door shut for now. On the other hand, if we witness weaker than expected data, this could build hopes for future rate cuts and boost stock indexes while hurting the USD.

It is important to keep a close eye on the previous NFP data revision as this could have a significant impact on market sentiment regardless of the actual figures.

Yen puts the brakes on Toyota

Toyota, Japan’s largest automaker, increased its operating profit by a surprising 8.7 per cent to 741.9 billion yen in the first quarter, thanks to sales growth and lower costs. However, due to the strong yen, Toyota lowered its outlook for the current fiscal year to the end of March 2020.

The construction sector activity in the United Kingdom saw a modest rebound in July. The final Purchasing Managers’ Index (PMI) registered at 45.3 in July compared to the weak 43.1 reading of the past month. However, the released data did little to nothing to the British Pound. The GBP/USD pair is trading sideways just above the 1.2100 handle.

Xing off the market

The Xing share has disappeared from the stock exchange since today. The background is that the career network had already announced last year that it would give itself a new name: New Work. In this way, the Hamburg-based company wants to express the changed circumstances: Over the years, the business profile has broadened considerably through acquisitions and start-ups. For example, the Hanseatic League now also organises events on all aspects of recruitment. It is already the second name change for the enterprise, which had been created in August 2003 under the name OpenBC (open Business club) by Lars Hinrichs. For the shareholders, apart from the brand name, the name of the share will also change.

Special income in US life insurance brought Europe’s largest insurer Allianz a surprising increase in earnings in the second quarter. Operating profit increased by a good five per cent year-on-year to just under 3.2 billion euros. Allianz thus exceeded the expectations of even the most optimistic analysts.

Net income even increased by 13 per cent to 2.1 billion euros, after the sale of the life insurance business in Taiwan a year earlier had burdened the result.