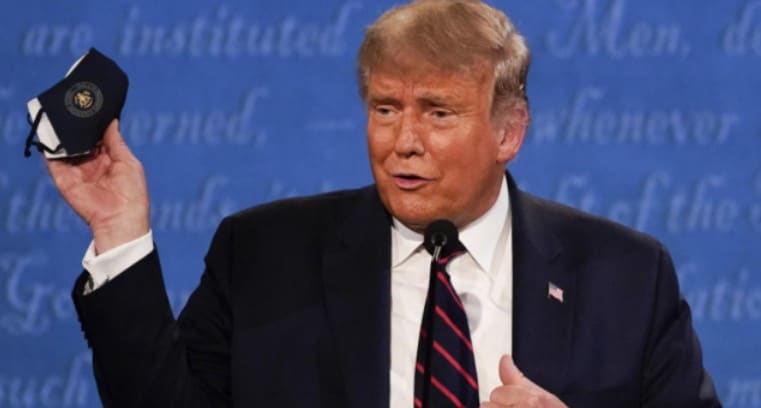 The news that US President Donald Trump had contracted the coronavirus on Friday scared investors and shocked the markets. At times there were significant price losses on the stock markets. In the day, however, Wall Street & Co made up ground again.

For relief on the stock markets, signals from the House of Representatives led to an early agreement on a further 25 billion US dollars in state aid to secure tens of thousands of airline employees for another six months. Even weaker than expected US job data fueled speculation on fresh money for the ever slower economic recovery.

On Wall Street, things went wild again. The Dow Jones fell sharply after the news around President Trump broke, but was able to recover ending the session only 0.48 per cent lower at 27,682.81 points. The NASDAQ Composite saw a strong downward trend and closed 2.22 per cent lower at 11,075.02 index units.

The main reason for the initial hefty sell-offs was the news that US President Donald Trump and First Lady Melania Trump have been infected with the coronavirus. Market participants showed uncertainty, as the US election on November 3 could now possibly be in jeopardy.

In addition, a possible new corona aid package, on which Democrats and Republicans have not been able to agree for weeks, could be delayed even further. Furthermore, the data from the US labour market had also turned out less positive than hoped for. The data confirm the so far slow recovery from the spring slump. In September, 661,000 jobs were created outside agriculture. Economists had predicted 800,000.

While the Chinese stock exchanges were still on holiday, the Japanese stock market was on the decline.

After trading on the stock exchange in Japan was suspended entirely the day before due to a technical problem, losses were reported on the Japanese trading floor on Friday. The Nikkei ultimately slipped by 0.67 per cent to 23,029.90 points.

Meanwhile, the markets in China continued their several-day holiday break. On Wednesday the Shanghai Composite lost 0.20 per cent to 3,218.05 points. The Hang Seng in Hong Kong had gained 0.79 per cent to 23,459.05 points at midweek.

The news about the corona infection of US President Donald Trump caused a flight of investors to so-called safe havens in the Asian financial markets on Friday. These include bonds, gold and, in the currency market, currencies such as the yen, the dollar and the Swiss franc.

Nervousness was also high on the European stock markets. The EuroSTOXX 50 entered trading weaker and maintained its negative trend throughout the day. In the end, it was 0.1 per cent lower at 3,190.93 index points.

In Frankfurt, the Dax 30 lost 1.5 per cent in the morning, in the afternoon it contained the losses and closed just 0.3 per cent lower at 12,689 points. Despite four days of losses in a row, Germany’s leading index was able to post a weekly gain of 1.8 per cent thanks to a strong Monday. The TecDAX was also weaker at the start of trading today and then fell further. It ended down 1.13 per cent at 3,078.82 units.

As elsewhere, selling pressure arose on Friday after news of Donald Trump’s coronavirus infection were published. Investors were particularly concerned about the consequences for the current US election campaign. It is still unclear how long Trump and his wife Melania will have to remain in quarantine.

On the Forex market, the Greenback was once again in demand as a safe haven, gaining 0.3 per cent against a basket of currencies at its peak. The euro exchange rate recovered on Friday after losses in European business in US trade and held above 1.17 US dollars. Before the weekend, the European common currency closed at $1.1716.

On the other side stands gold. The precious metal benefited from the reigning uncertainty in the markets and continued its upward trend above $1,900 to currently $1,907 per troy ounce.

Cryptocurrency prices consolidated on Friday. Bitcoin was trading at $10,500 a coin while Ethereum costs $346 a token and XRP $0.2340.

Although the situation on the US labour market continued to improve in September, the signals from the individual indicators were contradictory. While the number of employees increased more slowly than expected, unemployment fell more sharply than forecast, albeit with falling labour force participation, and hourly wages rose only marginally. According to information from the Ministry of Labor, the number of employees outside of agriculture increased by 661,000. This was still 7 per cent or 10.7 million below the pre-Corona level. The separately calculated unemployment rate fell to 7.9 per cent (August: 8.4 per cent). Economists had forecast a decline to 8.2 per cent.

Incoming orders in the US industry in August were up 0.7 per cent on the previous month. Economists, however, had expected an increase of 0.8 per cent. For the last month, there was a plus of 6.5 per cent, as the US Department of Commerce further announced.

The mood of US consumers brightened in September. The index for consumer sentiment in the USA calculated at the University of Michigan rose to 80.4 from 74.1 at the end of August in the month-end survey. Economists surveyed by Dow Jones Newswires had expected a level of 79.0.

Despite the weak automotive economy, Tesla continues to grow at full speed. The US electric carmaker sold 139,300 vehicles to customers in the third quarter. Tesla thus set a new record, exceeding both the previous year’s figure of 97,000 cars and the previous quarter’s figure of 90,650. Analysts had expected around 137,000 deliveries. The majority of deliveries were for Tesla’s lowest-priced Model 3 and the newer Model Y compact SUV. According to an insider, the US electric carmaker also plans to take over the German industrial supplier and battery specialist ATW Automation. However, Tesla shares fell noticeably today.