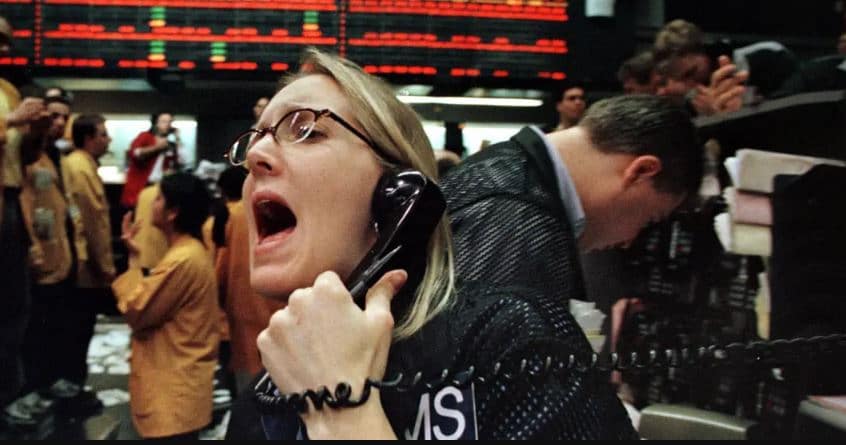 The intensifying tensions between Iran and the USA have put a heavy damper on the pronounced buying propensity on the global stock markets on Friday.

The good mood of the investors was over when it became known that the USA had committed itself to an airstrike on an Iranian general of the elite unit “Revolutionary Guards” in Baghdad. The commander of the Iranian Al-Kuds Brigades, Ghassem Soleimani, was killed in a US missile attack ordered by Donald Trump near the airport of the Iraqi capital Baghdad. Iran’s supreme leader Ayatollah Ali Khamenei then threatened the USA with “severe revenge”. Earlier, the US embassy in Baghdad had been attacked, for which Washington blamed the government in Tehran.

According to former US Vice President Joe Biden, the United States may be “on the verge of a major conflict in the Middle East”. US President Donald Trump had “thrown a stick of dynamite into a powder keg,” the Democratic presidential candidate wrote in a statement.

Today, investors were looking for proven “safe havens”, which included not only the traditional crisis currency, gold, but also German government bonds, as well as the dollar and the Japanese yen in the currency market.

Prices are also falling on the leading world stock exchange in New York. At the time of going to press, the leading index Dow Jones is losing a reasonable 0.75 per cent, while the broader-based S&P 500 Index is losing 0.5 per cent. Both indices had set new records the day before.

Initial gains on the Asian stock exchanges were reversed after news of the killing of the Iranian general by the USA. China’s CSI 300 is currently 0.4 per cent lower, Hong Kong’s Hang Seng is down 0.25 per cent. In Japan, the stock exchanges are still closed this Friday.

On Thursday, the stock market barometer missed a new high since the beginning of 2018 only by a hair’s breadth. The EuroStoxx 50 fell by 0.52 per cent on Friday, while the leading German index Dax 30 lost 1.25 per cent to 13,219 points at the end of a weak trading day. On the other hand, investments that were considered safe, such as German Bunds, received a noticeable boost. The trend-setting futures contract Euro-Bund-Future rose by 0.4 per cent to 171.85 points in the morning.

After slightly higher German inflation data in December, the euro recouped its initial losses against the dollar and is currently trading at $1.1171. Consumer prices rose by 1.5 per cent year-on-year, the consensus was a 1.4 per cent increase. Compared to the previous month, the gain was plus 0.6 per cent, with a 0.4 per cent increase expected.

In addition, the foreign exchange market was dominated by the global revival of the dollar. Especially in times of crisis, the US currency is as much in demand as the Japanese yen. Also, gold, in particular, is considered a traditional crisis currency. The price of a troy ounce rose by 1.3 per cent to 1,549 dollars, the highest since September 2019.

Oil prices reached their highest level since May 2019, with the price of a barrel of WTI rising by almost three per cent to USD 62.70 on the futures market and Brent rising by a similar amount to USD 68.26. This even surpassed the high of last September, which had been reached after a severe attack on Saudi Arabian oil facilities.

Most popular cryptocurrencies also received a decent boost on Friday. The leading digital asset Bitcoin rose by over 5 per cent to $7,320, while Ethereum (Ether) climbed 4.6 per cent to just above $133 and XRp by 3.05 per cent to $0.1925. The biggest gainers of the top ten cryptos were BitcoinCash and Bitcoin SV with price increases of 13.2 and 11.05 per cent.

The air is getting thinner for Atlantia

Political pressure on the Italian motorway operator Autostrade per l’Italia (ASPI) is growing following the collapse of a motorway bridge near Genoa a year and a half ago. The company is 88 per cent owned by the Benetton holding company Atlantia, and twelve per cent of the stocks are held by the Munich-based insurance company Allianz.

Transportation Secretary Giancarlo Cancelleri is pushing for the withdrawal of the lucrative concession for the country’s largest road toll collector. The bridge collapse in August 2018 killed 43 people. Since then, the dispute over who is responsible for the disaster and the consequences have been raging.

According to company circles, if the license were withdrawn without compensation, the company would even be threatened with bankruptcy. Then ASPI would no longer be able to service debts of 10.8 billion euros. Atlantia loans of 5.3 billion would also be at risk.

Hardly surprising was the publication of the minutes of the Federal Reserve’s meeting on 10-11 December 2019, in which the Fed promised to continue its interest rate policy.

“The current orientation of monetary policy is likely to remain appropriate for some time,” the minutes published on Friday stated. This would apply as long as there are no noticeable changes in economic conditions.

At its last meeting last year, the Fed had left its key rate unchanged in a range of 1.50 to 1.75 per cent. Previously, it had cut the key rate three times in a row by 0.25 percentage points each time. At the time, the US Fed had signalled that key rates would remain unchanged for the election year 2020.

As if the geopolitical tensions were not enough, a weak ISM index in the USA also created a fundamental headwind. In December, sentiment in US industry fell to its lowest level in over ten years.

The ISM purchasing managers’ index fell to 47.2 from 48.1 last month, according to the Institute for Supply Management in Washington on Friday. On the other hand, the analysts had expected the index to rise to 49.0. The last time the indicator fell even lower was in June 2009.

Analysts spoke of a disappointment, as there are still no signs of a recovery in the US industrial sector. US industry indeed generates a much smaller share than the greater service sector. However, the business of many US service providers depends on the state of the US industry. The ISM index is considered a reliable leading indicator of economic activity in the US.

In 2019, the stock market performed impressively. But in the new year, the market will collapse, believes the well-known Wall Street investor David Tice.

The performance of the market-wide S&P500 was more than impressive last year, with a plus of almost 30 per cent. But for 2020, investors must be prepared for heavy losses, warns David Tice, an investor known for his bearish attitude.

The S&P 500 is currently still rushing from one record high to the next. Tice believes the rally may continue in the first half of the year: For example, he sees the probability of the S&P 500 rising by another 15 per cent at 50 to 60 per cent. Nevertheless, he believes it is too dangerous to buy stocks at the moment.

The Wall Street bear sees a 20 per cent probability that the stock market could collapse by 40 to 60 per cent in the new year. Given this considerable loss potential, he prefers not to take any risks. Warren Buffet, the most famous Wall Street investor, also keeps a lot of his cash out of the game – far over 100 billion US dollars to be more precise. A clear sign that he also believes in a market correction at the least.

He continued, “The exaggerations are so great. Corporate debt is so significant. Exports, commercial and residential construction, and even capital expenditures have already reached recession levels.”

He also warned of further problems. For example, the market is currently being driven by the liquidity available, even though companies are already reporting worse results.

Because of this situation, David Tice now advises to putts. Gold and gold shares are also a good investment option, according to him. However, it should also be mentioned that Tice is known for his pessimistic assessments and has already warned of an impending recession in 2012, 2014 and 2017. In 2008, however, he showed the right timing when he sold his Prudent Bear Fund when the financial crisis was about to break out.