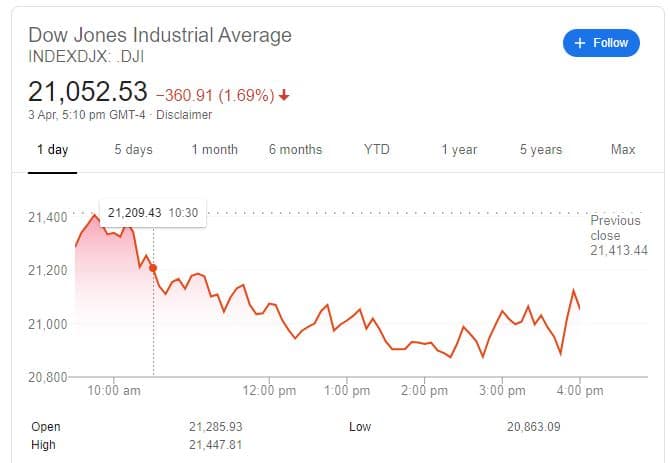 Furthermore, the spread of the coronavirus pandemic continues to dominate events. In the USA, 1,169 deaths were recorded, the highest number ever recorded in the world within 24 hours within a single country. According to the latest US government forecasts, up to 240,000 people could die from the coronavirus-induced lung disease Covid-19.

Added to this were the shocking figures from the US labour market on Thursday and the imminent worst economic slump of the post-war period. Therefore, before the weekend, many investors pushed out of the market, especially as short-term developments are particularly imponderable at the moment.

On Friday, investors were once again under pressure to sell, which pushed the US equity indexes well into negative territory.

Before the weekend, the Dow Jones presented itself with falling prices and ultimately slipped by 1.69 per cent to 21,052.53 points. The Nasdaq Composite was also weaker and lost 1.53 per cent to 7,373.08 points.

After an initially rather calm reaction to the weak labour market report, the US stock markets came under even greater pressure as trading continued on Friday. In March, the US labour market lost 701,000 jobs, the first slump since 2010. Economists had expected only a decline of 10,000 jobs. The unemployment rate rose to 4.4 per cent, the most substantial monthly increase since 1975.

The major Asian indices moved in red territory on Friday.

European stock markets also trended lower on Friday. The EuroSTOXX 50 showed a marginal minus of 0.09 per cent to 2,686.07 index units at the start of trading but fell more sharply after that. It ended the session 0.95 per cent lower at 2,662.99 points. After the recovery rally of around 7 per cent in the previous week, the leading European index has on balance lost 2.4 per cent in the past five trading days.

The German leading index Dax 30 dropped 0.5 per cent to 9,525.77 points on Friday. On the weekly chart, the index with the 30 most important shares in Germany has thus lost 1.1 per cent, the minus since the beginning of the year adds up to about 30 per cent.

The recovery from the virus crash that began in mid-March, driven primarily by government rescue packages and the flood of money from central banks, has not continued for the time being. Investors are surprised that an end to the pandemic, together with the initial restrictions imposed, is not in sight any time soon – with severe consequences for the economy. In the eurozone, a batch of sentiment data was released on Friday, and the eurozone dropped at a record pace.

On Friday the euro extended its losses from the week that is coming to an end. In the low, the common currency euro fell to 1.0776 US Dollar. In the night on Friday, it had still quoted one cent higher. The European Central Bank (ECB) set the reference rate at 1.0785 (Thursday: 1.0906) dollars on Friday evening.

The price of oil has been on a constant downward trend since the beginning of the year, with both the price of WTI (West Texas Intermediate) and Brent, Europe’s most important type of oil, falling from just over USD 60 (WTI) and just under USD 70 (Brent) to currently USD 21.33 and USD 23.41 respectively. This marks a drop of 67.1 and 65.5 per cent for the two premium oil grades. The somewhat inferior Canadian oil WCS currently costs less per barrel than a jug of beer.

The gold price stabilised on Friday and cost $1,615 per troy ounce in the evening. The precious yellow metal had come under heavy pressure in March, after investors in a desperate search for cash had also liquidated their gold holdings, but has since been able to recover significantly.

The three leading cryptocurrencies Bitcoin, Ethereum and XRP, remained almost unchanged this Friday. A Bitcoin is currently valued at $6,720, an Ethereum token costs $142 and one coin for XRP is worth $0.1780.

The US electric carmaker Tesla delivered more vehicles than expected in the first quarter despite the negative impact of the corona crisis. In the three months to the end of March, around 88,400 cars were delivered to customers, as Tesla announced on Thursday after the US stock market closed. Analysts had expected significantly fewer. Tesla had delivered 63,000 cars in the same period last year.

Shortly after the start of trading on the US stock exchange NASDAQ, the Tesla share rose at times by 12.96 per cent to 513.46 US dollars. However, as the year progressed, the profits melted away. The final bell rang with a gain of 5.62 per cent to 480.01 US dollars.

ISM index for US service providers

Growth in the US services sector slowed down in March. Given the deep slumps in large parts of the US economy in the wake of the pandemic, however, the Purchasing Managers’ Index calculated by the Institute for Supply Management (ISM) proved surprisingly robust. The index fell to 52.5 (previous month: 57.3). Economists surveyed by Dow Jones Newswires had predicted a much steeper decline to 45.0, a drop below the growth threshold.

Shortly before this, the Purchasing Managers’ Index surveyed by the IHS Markit Institute had painted a different picture. The index calculated by this institute fell to 39.8 from 49.4 points. This was the sharpest fall since the survey began ten and a half years ago.