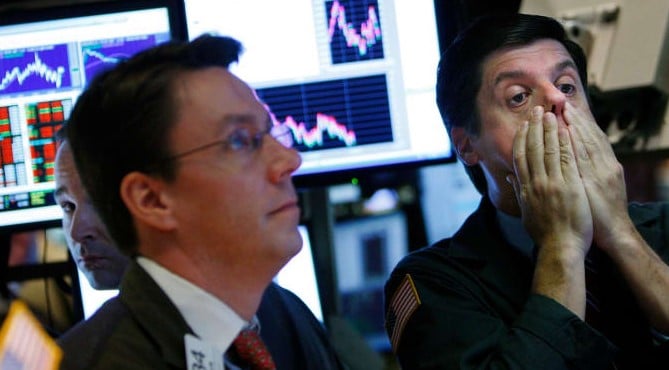 Another slap in the face

Those who had expected bargain hunters to take advantage of Thursday’s correction to enter the stock market got disappointed today, as the correction continued further.

The next sell-off in many equities was again triggered by heavy price losses in some of the leading US tech stocks. The Nasdaq 100 selection index at times slumped by almost 5 per cent to 11,203 points, resulting in a weekly loss of nearly 7 per cent. Because of the drastic slump, Apple’s market value has fallen back below the two trillion US dollar threshold.

Before the weekend, the US stock markets pointed further south. The Dow Jones recorded a slight gain at the start of trading and was initially able to build on this. Later on, however, it fell back into red territory, ending the session 0.56 per cent weaker at 28,133.58 points. The NASDAQ Composite technology index started trading 0.54 per cent lower at 11,396.24 points after its crash the previous day. After interim gains, it went into freefall mode again but was able to recover slightly. In the end, a minus of 1.27 per cent to 11,313.13 index points was on the price board.

Only brief support came on Friday from the better than expected US labour market data from August. As a result, unemployment fell against expectations. However, fewer new jobs were created outside agriculture than expected. Nevertheless, the data was received positively. However, technology stocks fell back again and also pushed the US leading index into the red.

Asia’s stock markets thus followed the negative trend on Wall Street the previous day. There, tech stocks on the NASDAQ stock exchange plummeted and also took the US leading index, Dow Jones, with them. In particular, there was profit-taking in the technology sector, which was in great demand during the crisis.

Europe’s stock markets were cautious before the weekend.

The EuroSTOXX 50 tended to be lighter at the end of trading, after having posted considerable gains in the meantime. At the end of the meeting, the share price fell by 1.32 per cent to 3,269.59 points.

On the foreign exchange market, the euro exchange rate was able to recover in later US trading from its sharp intraday drop. After the euro, triggered by a strong US labour market report, had temporarily dropped below the mark of $1.18 to $1.1781, it cost $1.1855 again shortly before the close of trading on Wall Street.

Oil prices resumed their downward trend of the past trading days on Friday. After a short excursion into the profit zone, they continued their losses of the two previous days from the afternoon on and continued their downtrend at high speed. Market observers pointed to a generally gloomy mood on the international financial markets, which also pulled oil prices down. In the late afternoon, a barrel of North Sea Brentwood was trading at just 42.79 US dollars, $1.28 less than the previous day. The price of a barrel of the US West Texas Intermediate (WTI) variety slipped by $1.49 to $39.88.

The gold price closed almost unchanged at $1,934 an ounce.

The cryptocurrencies market was able to recover before the weekend, with most of the major digital assets turning positive. Bitcoin gained 1.4 per cent to $10,400 while XRP increased by 1.7 per cent to $0.2550. Only Etehereum with a slight minus of 0.3 per cent to $385 and Tron, posting a hefty 19 per cent loss on the daily to $0.034. Tron is still more than 40 per cent in the green on the weekly chart after shooting up in the past days.

The US labour market is slowly recovering from the Corona crisis, but still has a long way to go. Job growth slowed in August. As reported by the US Department of Labor, 1,371,000 additional jobs were created in the private sector and the state. Economists surveyed by Dow Jones Newswires had expected an increase of 1,321,000 jobs.

The separately surveyed unemployment rate fell surprisingly sharply in August to 8.4 from 10.2 per cent, while economists had only expected a decline to 9.8 per cent. Private households are surveyed for these statistics, while companies and public authorities are surveyed for the number of employees.

Caixabank and Bankia want to merge

The Spanish banks Bankia and Caixabank want to merge to form the largest institution in the country. The merger is to come about through a pure share deal, Caixabank announced in a press release late Thursday evening. There was no agreement yet. So far, information has only been exchanged in order to sound out the possibilities. Bankia also confirmed that talks are underway.

On the stock exchange, the information caused a price firework: this morning, Bankia’s shares shot up by 30 per cent, Caixabank’s by 10 per cent. This made them the driving force for the entire industry. Deutsche Bank shares were up 4.3 per cent at the top of the Dax, and Commerzbank shares were up 6.6 per cent in the MDax. The French banks BNP and Societe Generale as well as the Dutch ING were also at the top of the EuroStoxx 50.