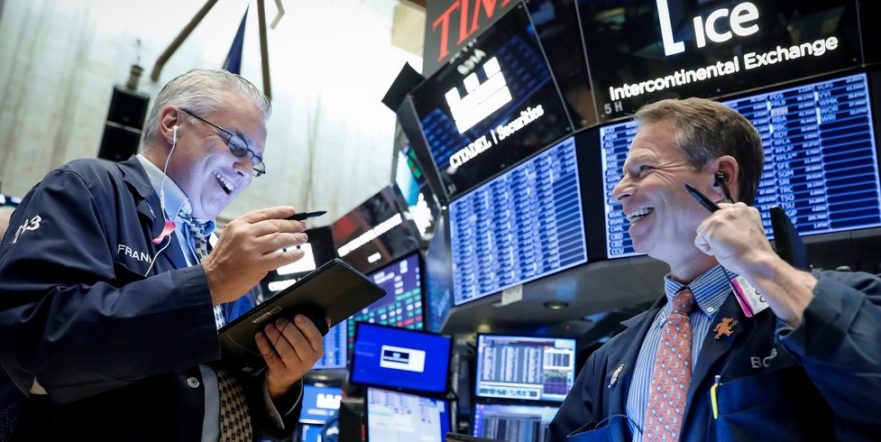 February has started more than just promisingly. Since the beginning of the month, the global stock markets have been moving steadily upwards, as did the cryptocurrency market. Wall Street experienced its fifth consecutive day of gains this Friday. The S&P 500 and the tech exchange Nasdaq climbed to new all-time highs on Friday, and the domestic DAX also secured substantial gains throughout the week.

Although the USA’s latest labour market report was somewhat sobering at first glance, it also had something positive. It fuelled speculation that the billions in corona aid promised by President Joe Biden will now be passed quickly. For days, Democrats and Republicans have been negotiating a gigantic economic stimulus package.

The US stock markets continued their rally trend before the weekend.

The labour market data, known as “non-farm payroll report” (NFP), were only partially convincing. US job growth climbed in January but fell short of expectations. At the same time, the overall unemployment rate fell sharply. On Thursday, initial jobless claims were surprisingly low.

On the corporate side, T-Mobile, Ford and many other companies provided impetus after reporting their figures.

The mood was nevertheless somewhat depressed by the corona pandemic: for the first time, more than 5,000 deaths linked to the virus were recorded in the USA in one day.

Green signs also predominantly characterised trading in the Far East on Friday. The Japanese benchmark index Nikkei 225 closed 1.54 per cent higher at 28,779.19 points. On the Chinese mainland, the Shanghai Composite fell slightly by 0.16 per cent to 3,496.33 points by the end of trading, whereas the Hang Seng rose by 0.60 per cent to 29,288.68 points in Hong Kong.

The majority of the Asian stock markets thus continued their upward trend after a brief interruption. Tailwinds were provided in part by new records on Wall Street – triggered by the continuing expectation of a large government stimulus programme and vaccination confidence. The pharmaceutical company Johnson & Johnson has applied for US emergency approval for its corona vaccine provided optimism.

Besides, the IPO of the Chinese video app Kuaishou caused a run on shares in Hong Kong.

Finally, the European trading centres also showed their friendly side on Friday. The EuroSTOXX 50 closed 0.28 per cent firmer at 3,652.43 points.

The US jobs data release put the brakes on the four-day rally on the German stock market. The DAX lost its daily gains and closed almost unchanged at 14,056 index units. For the week, however, the German benchmark index grew 4.6 per cent. This is the best weekly performance in three months. In addition, the TecDAX gained 0.07 per cent to 3,505.98 points at the end of trading.

The positive development on the Asian and US stock markets also provided a tailwind for the markets in Europe. Investors’ attention was also focused on the US labour market data, which were published in the afternoon.

The jobs data from America, which was not quite as good as expected, weakened the greenback on the foreign exchange market. The euro regained the 1.20 US dollar mark.

Oil prices also continued to rise in the positive environment of the financial markets. A barrel of North Sea Brent cost 59.78 US dollars at the high for the day. The barrel price of US West Texas Intermediate (WTI) rose to 57.28 US dollars. These are the highest levels in over a year.

After the heavy price collapse of gold the previous day, investors took the opportunity to buy the dip. The precious yellow metal price rose by 0.8 per cent to 1,814 dollars per troy ounce (31.1 grammes).

Lastly, the impressive bull run of cryptocurrencies continued as well. Bitcoin came close to recapturing the $40,000 mark and increased by 5.6 per cent to $39,400. Ethereum also continued to rally, trading as high as at $1,740 but ultimately rose by just 1.3 per cent on the daily to $1,675. After rallying the last few days, XRP took a breather today and held steady at around $0.4330. One of the biggest gainers in the past 24 hours was the smart contracts project Cardano, increasing by over 10 per cent to $0.53.

In January, “only” 49,000 new jobs were created in the US economy according to the latest NFP report. Economists had expected a tick more. The good news is that the US labour market is growing again. The bad news is that it is growing very slowly, several market observers commented. Also, job figures for the previous month were revised. In December, 227,000 jobs were lost. Initially, only a loss of 140,000 jobs had been reported.

Order intake in German industry was weaker than expected in December. According to Destatis, the Federal Statistical Office in the USA, orders fell by 1.9 per cent compared to the previous month. They were 6.4 (November: 6.7) per cent above the level of the same month of the previous year, adjusted for calendar effects. Economists surveyed by Dow Jones Newswires had anticipated a monthly decline of only 0.8 per cent.