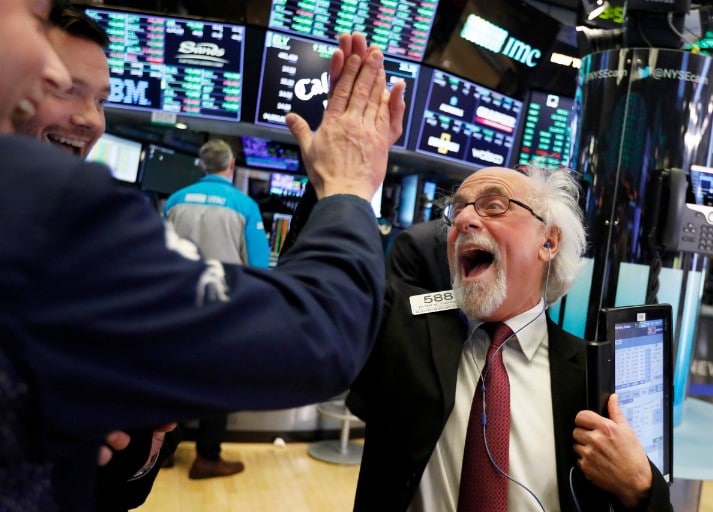 After robust labour market data, it is clear that the US interest rate turnaround is getting closer. But Wall Street investors remained calm at the end of an eventful week, even setting new records.

Even the prospect of a change in the interest rate regime – the usual poison for equity markets – did not shock investors. The economy is growing strongly, as expected after the crisis, and so are corporate profits. This was proven by the figures for the second quarter of the reporting season, which is now drawing to a close, and which in the vast majority of cases, exceeded analysts’ already high expectations.

Investors can currently live with this scenario, especially since an adjustment of US monetary policy is likely to take place only very cautiously – accordingly, fluctuations are moderate, and investors remain calm.

Among others, banks would benefit from higher interest rates, as their margins in the lending business would then increase. Against this background, the shares of large US banks in particular rose today.

Wall Street investors once again switched from tech stocks to standards. The Dow Jones opened marginally firmer and closed 0.41 per cent higher at 35,209.49 points. At 35,246.79 index units, it temporarily marked a new all-time high. In contrast, the NASDAQ Composite index lost ground at the start and remained in the red, closing down 0.40 per cent at 14,835.76 points.

The trading day was dominated by the US employment figures, which were published in the pre-market. The number of jobs rose more than expected, and the drop in unemployment and the increase in hourly wages were unexpectedly strong.

Investors in the Far East were mostly cautious on the last trading day before the weekend. The Japanese benchmark index Nikkei closed with a gain of 0.33 per cent at 27,820.04 points. Some good balance sheet figures from domestic companies provided support here. On the Chinese mainland, the Shanghai Composite lost 0.24 per cent to 3,458.23 points by the end of the Asian trading session, while the Hang Seng in Hong Kong shed a minimal 0.10 per cent to 26,179.40 units.

Concerns grew among investors that a new wave of restrictions by governments could end the economy’s recovery. This was compounded by fears of further regulatory intervention by China.

The European stock markets were friendly on Friday. The EuroSTOXX 50 started unchanged but ultimately gained 0.32 per cent to 4,174.54 points.

After the recent approach to its record high, the leading German index took it easy. In the afternoon, the landmark US labour market report was presented, which delivered optimistic data. In addition, the reporting season remained in focus. Figures were released by the DAX companies Allianz, Vonovia and Covestro.

On the foreign exchange market, the prospect of the beginning of the end of the Fed’s loose monetary policy drove the dollar. In turn, the euro fell back to 1.1761 dollars.

After an initially friendly start on the commodities market, oil prices came under pressure following the publication of the NFP report. North Sea Brent fell 78 cents to 70.47 US dollars, while WTI oil from the USA fell by 1.05 dollars to 68.05 dollars.

After the price of gold was still hovering around the $1,800 mark in Asian and European business, the price plummeted rapidly after the US jobs report. At the end of the week, a troy ounce of the precious yellow metal costs only $1,763.

Digital assets ended the week on a positive note, further extending their weekly gains. Bitcoin ultimately rose 4 per cent to $42,500, while Ethereum added 2.1 per cent to $2,890. All other important cryptocurrencies, such as XRP, Cardano, Binance Coin or Litecoin, also posted gains. The most significant price increases were recorded by DeFi heavyweights Polkadot and Uniswap, rising by 5-6 per cent.

According to predictions by the Ifo Institute for Economic Research, the industry in Germany has lowered its production expectations somewhat. According to the institute’s surveys, the indicator fell to 22 points in July, down from 27 in June. But that is still a very high value in a long-term comparison, it said. “Supply bottlenecks for important preliminary products are now making themselves felt,” said Klaus Wohlrabe, head of Ifo surveys. “The production outlook for the furniture industry, for example, has dropped noticeably.” The value fell to 27 points in July from 38 in June.

Wages in the USA rose again in July. Average hourly wages climbed by 0.4 per cent compared to the previous month, the US Department of Labour announced in Washington on Friday. Analysts had expected a wage increase of only 0.3 per cent. The department also said that the rise in hourly wages in June was higher than previously known. Compared to the same month last year, hourly wages continued to increase significantly, rising by 4.0 per cent in July.

The situation in the US labour market was better than expected in July. The number of jobs rose more than forecast, and the decline in unemployment and the increase in hourly wages were unexpectedly strong. According to the Department of Labour, the number of non-farm payrolls increased by 943,000. Economists surveyed by Dow Jones Newswires had forecast an increase of 845,000. The unemployment rate in the US fell to 5.4 per cent from 5.9 per cent in June. Economists had only forecast a decline to 5.7 per cent. Simultaneously, the labour force participation rate, the share of the labour force in the total working-age population, increased to 61.7 (61.6) per cent.