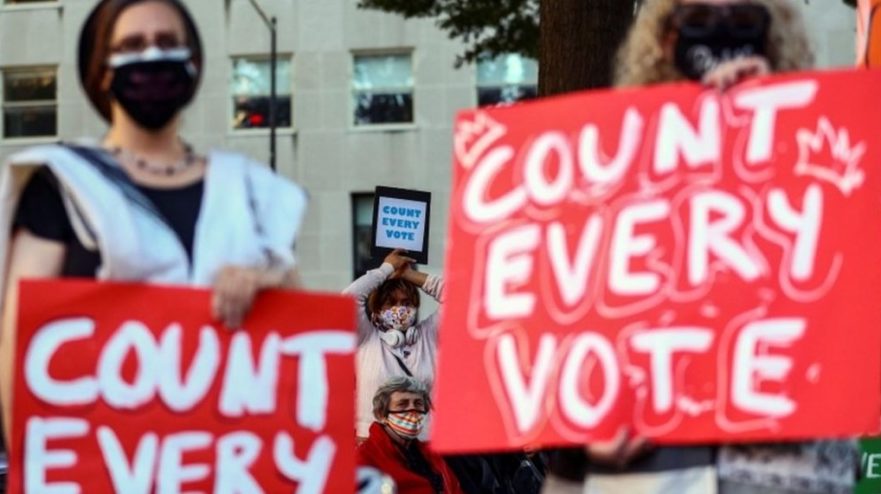 In America, there is growing evidence that Joe Biden is slowly but steadily increasing his lead in the narrow race for the White House. He is slightly ahead in all still contested states and profits from the counting of postal votes. Officially, however, no decision has yet been made. In the state of Georgia, for instance, votes are being recounted because of the extremely narrow majority ratios, as the election officials announced in the evening. Biden had been leading the polls there in a razor-thin way. So it could take even longer until a final result is available.

Accordingly, investors on Wall Street and other major stock exchanges held back before the weekend, partly because the stock market had been doing very well recently anyway. The major indices all ended up at around the same level as the previous day.

After the strong gains on the previous days, Wall Street held back on Friday, not going into further risk as long as the situation in the US becomes more stable.

Before the weekend, there was some small profit-taking due to the continuing risk factors. However, due to the better than expected US labour market report for October, investors left a decent amount of chips on the table.

In the US presidential election, the Democrat Joe Biden came a huge step closer to the White House. He is now in the lead in counting the votes in four out of five still contested states. He also overtook incumbent Donald Trump in Georgia and Pennsylvania. However, his lead is still very narrow. Trump made it again clear that he would not accept defeat under any circumstances, threatening with further legal actions and calling the counting of votes fraud.

The recovery in the US labour market accelerated in October, with employment rising faster than expected and the unemployment rate falling more sharply than previously forecast.

Investors watched the outcome of the presidential election in the USA with interest and held back with bigger moves before the weekend.

The European stock markets were also rather subdued before the weekend and after the strong gains of the previous day. The EuroSTOXX 50 increased its initial loss and finally ended Friday trading 0.36 per cent lower at 3,204.05 points. Thanks to good US labour market data, it recovered somewhat from its daily low.

However, the focus was on the US elections – in which Joe Biden’s victory is drawing ever closer – and the still high corona infection figures. Lockdown measures are currently being implemented in many European countries to reduce the high case numbers.

In addition to the political thriller from Washington, the official labour market data for October were of course also taken into account today on the Forex markets. On Friday, the euro continued its climb in US trade towards $1.19 and climbed to its highest level since mid-September. Most recently, the common currency traded at 1.1882 US dollars, around 2 cents more than at the beginning of the week.

Although oil prices have risen significantly over the week, there has been a sharp setback today. The North Sea Brent crude, for example, is now trading at 39.81 US dollars. That was $1.11 less than the day before. WTI oil also fell sharply, dropping by $1.23 to 37.57 US dollars.

The gold price could not maintain its initially higher gains but still closed 0.14 per cent higher at $1,952 per troy ounce.

The cryptocurrency bull run further continued, but Bitcoin was stalling in the end, not making any significant headway past the $15,500 mark. Altcoins like Ethereum, XRP, ChainLink, Bitcoin Cash, Litecoin or Cardano, on the hand, rose again sharply. Ethereum gained 6.5 per cent on the daily to now $460, while XRP climbed 3.5 per cent to $0.2640 and ChainLink jumping 16.2 per cent to over $13.

Production in the German manufacturing sector was slightly weaker than expected in September. According to information from the Federal Statistical Office (Destatis), it rose by 1.6 per cent compared with the previous month and was 7.3 per cent (August: 8.7 per cent) down on the same month of the last year. Economists had forecast a monthly increase of 2.5 per cent. On the positive side, the 0.2 per cent decline in production reported for August was revised to a plus of 0.5 per cent.

US job growth exceeded expectations in October. The US Department of Labor reported that 638,000 additional jobs were created in the private sector and the state. Economists surveyed by Dow Jones Newswires had expected an average increase of only 530,000 jobs. US hourly wages rose by 0.1 per cent to $29.50 compared to the previous month. Economists had expected a plus of 0.2 per cent. Wages were 4.5 per cent higher year-on-year.

The world’s largest transport broker Uber continues to groan under the Corona pandemic and has again suffered a substantial loss in the third quarter. The bottom line was a loss of 1.1 billion US dollars, as the taxi competitor announced on Thursday after the US stock market closed. However, Uber’s deep red figures have not only been normal since the corona crisis; a year ago, the loss was even slightly higher due to enormously high investments and costs.

After the slump at the start of the pandemic, business is still recovering, but Uber remains severely affected. In the most recent quarter, sales fell by 18 per cent to 3.1 billion dollars. Investors didn’t receive the news well, and the share initially fell sharply into the red in after-market trading. On average, analysts had expected significantly better results. Nevertheless, the Uber share rose by 6.48 per cent to $44.71 over the day.

The US subsidiary of the Bonn-based Deutsche-Telekom group remains on course for success after the takeover of its smaller rival Sprint. In the third quarter, profits increased by 44 per cent year-on-year to USD 1.3 billion, as T-Mobile US announced on Thursday after the US stock market closed. Strengthened by the merger with its smaller competitor Sprint, the mobile operator had more than 100 million customers for the first time. Despite the Corona crisis, 689,000 new telephone contracts under its own brand were added after deducting terminations.

According to insiders, the US investment bank Goldman Sachs is relocating large parts of its European business from London to Frankfurt because of the Brexit. This involves assets of up to 60 billion US dollars (around 51 billion euros), the news agency “Bloomberg” reported on Friday, referring to persons familiar with the matter. According to its annual report, the Frankfurt-based subsidiary Goldman Sachs Europe only had assets of around three billion euros (3.6 billion dollars) at the end of 2019.

A Goldman spokesman did not want to comment on the information when asked by Bloomberg. At the end of the year, Great Britain will withdraw from the EU internal market and the customs union. As a result, London banks will lose the so-called financial passport based on which they have been able to offer financial services in the EU and the European Economic Area up to now.