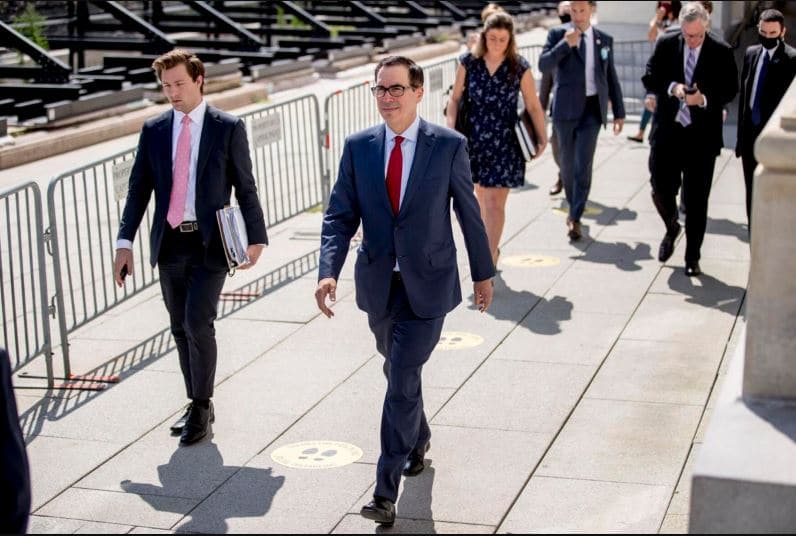 It was once again the same questions that traders at the stock exchanges tried to weigh up: will the extended corona aid package come, or not? What happens in the dispute between the USA and China? And in general, what happens after corona, if there will ever be an “after”?

Just before the weekend started, traders got their answer in regards to the next stimulus package: The tough negotiations on another huge corona economic stimulus package in the USA have failed for the time being. This was declared in Congress on Friday afternoon by the Democratic, Republican and Government negotiators. Initially, no further round of talks was scheduled – just hours before the Senate was scheduled to take a summer recess for a month.

On the US stock exchanges, technology stocks tended to be weaker, while standard stocks made slight gains. After initial losses, the Dow Jones turned positive at the end of the trading session and gained 0.17 per cent to 27,433.18 points. In contrast, the technology index NASDAQ Composite lost 0.87 per cent to 11,010.98 points.

The mood on Wall Street was seen as depressed in the run-up to the event. Two stress factors contribute to this: The extension of Corona aid is in question, and tensions between China and the US continue. On the other hand, the US labour market data are sending out slightly positive signals.

Asia’s major stock markets trended again weaker on Friday. In Tokyo, the Nikkei closed with a loss of 0.39 per cent at 22,329.94 points.

Besides the “second wave” fears of the corona epidemic, the tensions between the major powers, the USA and China, also weighed on the mood. US President Donald Trump has signed a decree that will ban TikTok in a month and a half if the popular video platform is not sold by then.

European markets were undecided on Friday. The EuroSTOXX 50 started virtually unchanged at 3,240.52 digits and then trended around the previous day’s closing price for the rest of the day.

The Dax fluctuated around the break-even point for a long time, but in the afternoon it turned positive and in a first reaction to the US labour market figures climbed to a daily high of 12,691 points. Afterwards, although the gains largely melted away again, investors still sent a signal of reconciliation at the end of trading. The Dax ended before the weekend at 12,674 points, 0.66 per cent higher than yesterday.

The leading index thus remained within its price range of recent days. On the weekly chart, the index posts a plus of 2.8 per cent.

Even though the ongoing tensions between China and the United States continued to have a negative effect, economic data from France, Spain and Germany were received positively. The US labour market data published in the afternoon also supported these positive impulses.

On the Forex market, the euro exchange rate came under significant selling pressure on Friday. In the afternoon, the common currency fell to as low as $1.1756. During the night, the euro was still quoted at 1.1883 US dollars. The greenback gained against almost all other major currencies today, mainly because of the positive NFP report.

Oil prices have fallen today. Last time a barrel of Brent cost 44.71 US dollars – 39 cents less than the day before. The costs for a barrel of the US oil type West Texas Intermediate (WTI) fell by 40 cents to 41.55 US dollars. Commodity expert Eugen Weinberg of Commerzbank explained the price decline with the recent tensions between the USA and China. This would have weighed on the mood on the financial markets and also pulled oil prices down. On the weekly chart, however, prices have risen. US oil alone has increased by more than 4 per cent since Monday.

After multiple rejections around the $2,070 mark, gold dropped sharply, accelerating its descent even further after the US labour market data was released. At times, the precious yellow metal lost more than $50 on the troy ounce and fell to as low as $2,016. Later in the evening, the price stabilised somewhat and closed at $2,035.

Cryptocurrencies traded stable and slightly trending upwards for most of the day until things turned sour and most major coins and tokens were sold off. Bitcoin thus lost 2.5 per cent to $11,500, while Ethereum dropped by 6.3 per cent to $372 and XRP declining by 5.8 per cent to $0.2899.

China‘s trade balance for July caused some movement in the morning. Despite the global corona pandemic, China’s exports rose unexpectedly strongly last month. Exports of the second-largest economy increased by 7.2% year-on-year in July, the Beijing Customs Administration reported on Friday. In contrast, imports were slightly weaker, shrinking by 1.4 per cent. The bottom line is that foreign trade thus increased by 3.4 per cent to a value of around 413 billion US dollars.

The corona crisis has torn deep holes in the German export balance of the first half of the year. The value of goods exports slumped by 13.4 per cent to 576.8 billion euros compared to the same period last year, according to the Federal Statistical Office. In June, the recovery that began in May continued. Compared to the previous month, exports rose strongly by 14.9 per cent. It was the most substantial month-on-month increase since the beginning of the time series in 1990.

German industry also recovered in June from the drastic slump in production during the corona crisis. In the manufacturing sector, production rose by 8.9 per cent month-on-month, according to the Federal Statistical Office. Analysts had expected a somewhat weaker increase of 8.2 per cent.

The US labour market data are sending out positive signals: outside of agriculture, 1.76 million new jobs were created in July. An anticipated 1.51 million jobs had been created. The unemployment rate also showed a slightly better picture than the gloomy forecasts. This is expected to amount to 10.2 per cent in July, while the market expected 10.3 per cent.

The travel booking platform Booking has felt the full force of the pandemic and the associated mass cancellation of travel. In the second quarter, booked overnight stays fell by 87 per cent year-on-year. Revenue shrank by 84 per cent to 630 million dollars. Travel booked in the second quarter totalled 2.3 billion dollars. That is a slump of 91 per cent. The company has already announced extensive job cuts.