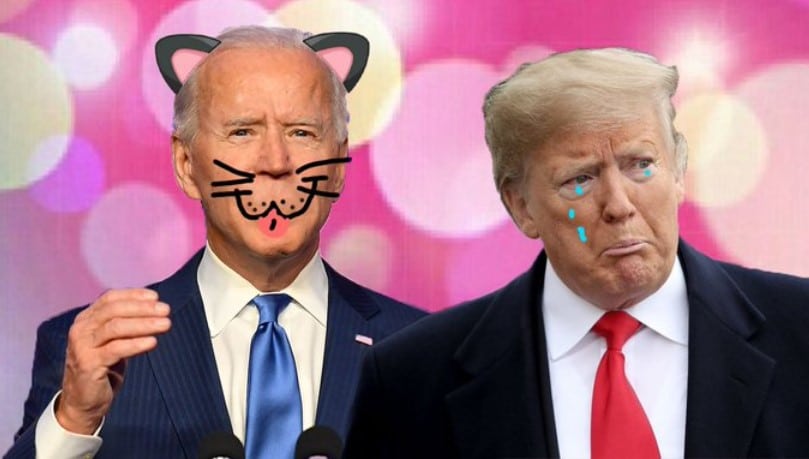 How high will the stock markets and Bitcoin go? Despite the continuing rise in corona infections and the expansion of the lockdowns in Europe, and the attack by violent Trump supporters on the Capitol in Washington, investors are in high spirits.

According to the media, traders speak of the “sweepy Joe” effect. The outgoing US President Donald Trump had mocked his future successor Joe Biden as “sleepy Joe”. Since Wednesday evening it has been clear: Biden and his Democratic Party can govern the USA. Biden has a majority in both chambers of the US Congress. Political experts and investors call this constellation a “clean sweep”. That is why “sleepy Joe” is now becoming “sweepy Joe”. Biden could now more easily push through his gigantic aid and infrastructure programmes.

Biden wants to present the details of his economic stimulus package at the end of next week. Asked by a reporter whether the package he wants could have a volume of three trillion US dollars, the future US president said it would be an expensive package given the severe economic crisis. “The answer is, yes, it will be a trillion-dollar total package,” Biden said on Friday in Wilmington, Delaware.

Even the weak US labour market data released today is being interpreted positively by the market. This increases the probability of further Corona aid.

Most of Asia’s stock markets were in the green on Thursday.

Once again, Wall Street’s record guidance supported hopes for a strong economic recovery in 2021. Market participants expect further stimulus in the US now that the Democrats have a majority in the Senate and the House of Representatives. There are also hopes for a global easing of trade relations under the new US president.

The Dax opened the session with a plus and thus started the last trading day of the week already above the 14,000-point mark. In the morning it reached a new all-time high of 14,131.52 points and remained in the profit zone. It then went into the weekend 0.58 per cent stronger at 14,049.53 points. The TecDAX recorded significant gains after starting trading higher. Its closing level: 3,293.58 points (+1.32 per cent).

Positive indicators from Wall Street and Asia had a supportive effect. Investors continue to hope for the expected aid package from the Democrats in the USA. Negative headlines continue to be elegantly ignored by the market.

An unexpectedly weak US labour market report could only temporarily support the euro, which had traded above 1.23 US dollars for the first time in years in recent days. The last price paid for one euro on the Forex market was 1.2216 US dollars.

Bitcoin continues to melt faces on the cryptocurrency market as it climbed yet another 5 per cent to $40,700 today. As always, intraday trading of many digital assets was very volatile with price swings of 10-15 per cent in either direction. Ethereum held steady at $1,220 while XRP continues to be strongly undervalued, in our opinion, and only moved up 0.2 per cent to $0.3180.

Industry in Germany has lowered its production expectations for the coming months, according to the Ifo Institute. The picture in the individual sectors is very differentiated, overall the production expectations of industry have clouded over, said Ifo expert Klaus Wohlrabe on Friday, “They fell in December to 4.5 points, after 5.6 in November,” it said based on the economic survey of the Ifo Institute in Munich. “In the pharmaceutical industry, the indicator plummeted. After 36 points in November, it fell to just 6 in December,” the institute added. “In the car industry, production cuts have been announced. The indicator fell from minus 1 point to minus 21 in December.”

In the USA, the highly anticipated NFP report unexpectedly showed negative signs. Even though the unemployment rate stayed steady at 6.7 per cent, non-farm payrolls fell by 140,000. Analysts had expected a slight increase of 71,000 jobs.

Is a bubble looming?

Because of the crazy highs on the stock markets, the first cautionary voices are being heard. Fears are being raised about a new bubble on the stock markets. Market strategist Albert Edwards of the French bank Societe Generale, for example, emphasised that the rally was strongly based on the hope of many investors that the US Federal Reserve would intervene in case of doubt to prevent a crash. The central banks’ flood of cheap money has been driving the stock markets for a long time. It could become problematic if inflation expectations suddenly rise sharply.