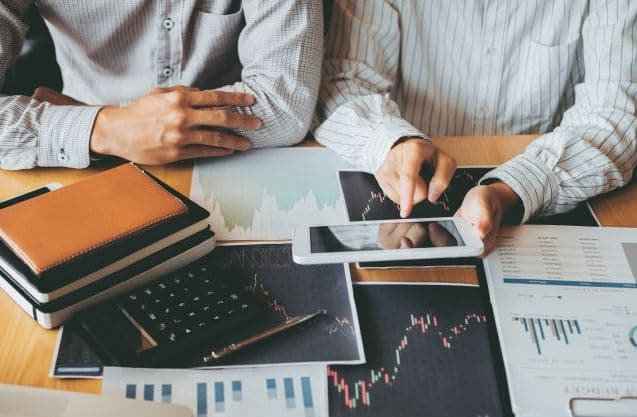 Weak macro data have not bothered investors for a long time, and the stock markets are almost exclusively driven by fantasy and hope. So once again, the global indices have risen although yet another flood of shocking figures was presented today.

The fundamental data were devastating, as so often in the past. In Germany, exports fell drastically in April and in America, unemployment has risen sharply and to levels not seen since 1948.

However, the weak April data from the US Labour Market Report came as no real surprise and also turned out better than expected – in other words, not quite as dramatic as feared. This was enough for investors to take action and look to the future with a great deal of optimism. In the USA, this was also since the trade conflict with China had lost some of its sharpness.

Wall Street continued to perform well on Friday. The Dow Jones opened higher and extended its initial markups even further. In the end, the price board recorded a plus of 1.91 per cent to 24,331.32 points. The NASDAQ Composite also saw the stock market lights on green: It gained 1.58 per cent to 9,121.32 points.

Before the weekend, risk appetite increased somewhat in Europe. The gains in the US and Asia also helped to boost the buying mood of European investors. Market participants well received the multiple loosening of corona restrictions. It is hoped that the global economy will recover soon.

The EuroSTOXX 50 ended Friday trading 0.96 per cent stronger at 2,908.11 points, having already posted a profit at the opening of the exchange.

The Dax 30 remained on green ground after a solid start. In the evening it closed with a significant gain of 1.35 per cent at 10,904.48 points. The TecDAX was also up throughout the entire trading day and finally closed the day 1.15 per cent higher at 2,982.99 units.

The euro exchange rate moved little on Friday despite poor US labour market figures. In New York, 1.0843 US dollars were paid for the common currency, which is about the same amount as in early Friday trading. While there was little movement between the euro and the dollar, the Australian and New Zealand dollars benefited from the easing of tension between the USA and China. China is an important trading partner of the resource-rich countries Australia and New Zealand. The currencies of many emerging markets, such as the Russian rouble, the Turkish lira and the South African rand, are also benefiting from the current easing. By contrast, the Japanese yen, as a traditional safe haven, has come under pressure.

Oil prices rose slightly on Friday. Signs of easing between the two economic powers, the US and China, helped to improve market sentiment. A barrel of the North Sea variety Brent crude last cost with 91 cents more than on Thursday $30.28. The price of a barrel of the WTI variety rose by 73 cents to $24.08.

The most important cryptocurrencies consolidated today. Bitcoin only lost marginally and is currently traded at $9,800 per coin. Ethereum and XRP, on the other hand, increased slightly with Ethereum trading at $213 and XRP at $0.22.

Increased risk provisioning caused a substantial drop in profits for Dutch bank ING in the first quarter. Revenues were down slightly, and net profit fell by 40 per cent to 670 million euros. The bank had to set aside 661 million euros for impaired loans, compared to 207 million euros in the same period last year.

The bank’s income fell only slightly, by 1.4 per cent to 4.5 billion euros. While net interest income advanced by 0.5 per cent, commission income rose by 16 per cent. By contrast, investment income slumped by 86 per cent.

Uber with billions in losses

The driving service provider Uber opened the books for inspection on Thursday evening after the US stock market closed. Uber, the driving service broker, is deeply in the red due to the current crisis. In the first quarter, the loss increased by 190 per cent year-on-year to $2.9 billion (2.7 billion euros), as the taxi competitor announced on Thursday after the US stock market closed. “The pandemic struck our taxi business,” explained Uber boss Dara Khosrowshahi.

The loss was mainly due to billions of euros in write-downs on the value of company investments due to the Corona pandemic. Uber holds shares in various transport services and food delivery platforms worldwide such as Grab, Yandex or Didi. In contrast, sales rose by 14 per cent to $3.54 billion. Here, the company benefited above all from its food delivery division Uber Eats.

Surprisingly, the aircraft manufacturer Airbus did not receive a single cancellation of aircraft orders in April. At the beginning of the month there was even a new order for nine aircraft from the 320neo family from the aircraft financier Avolon, the company announced on Thursday. This brings the number of gross orders this year to 365. As there had been 66 cancellations in the first quarter, the number of net orders by the end of April was 299. Due to corona-related production restrictions and the requirements resulting from the crisis, only 14 aircraft could be delivered in April. This brings the total number of deliveries since the beginning of the year to 136.