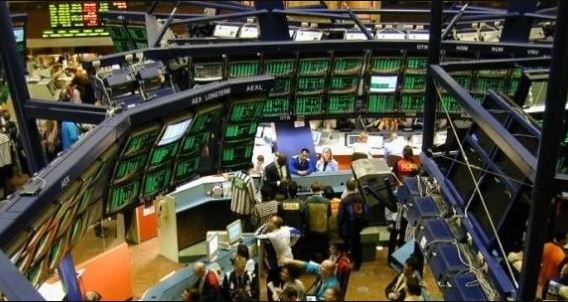 After days, even weeks of record hunting on some of the world’s most important stock markets, a bit of calm returned today, Friday.

One day after the agreement in the trade dispute announced by a Chinese government spokesman, Donald Trump raised doubts about an agreement. The US president said in Washington on Friday that he had not agreed to withdraw tariffs that had already been imposed gradually. The government in Beijing knew that he would not completely reverse the tariff screw. But it wants at least a partial withdrawal of tariffs. “I did not agree to anything. China is more interested in a trade agreement than he is. Billions would flow into the US coffers as a result of the tariffs. “I’m very happy right now.”

Trump’s statements caused uncertainty on the stock markets and stopped the markets from flying high for now.

Investors also held back on Wall Street with purchases. At times, the Dow Jones index fell to a daily low of 27,591 points, a minus of just under 0.3 per cent. That the reactions were very moderate was explained by market experts with the fact that Trump’s response shows how divided the American side is in the trade conflict.

Good news came from the monthly survey of US consumers. Their mood brightened a little in November. The University of Michigan’s consumer confidence barometer rose to 95.7 points from 95.5 points in October. Economists surveyed by Reuters had expected a slightly higher rise to 95.9 points. Consumers were less optimistic about their current situation and were more optimistic.

The majority of Asia’s most important stock markets tended to be in the red on Friday. Traders pointed to weak Chinese economic data. The exception was Japan, which benefited from continued optimism in the U.S.-China trade dispute. The Nikkei 225 closed Friday at 23,391 points with gains of 0.3 per cent. For the current week, this means gains of around 2.4 per cent.

On Friday, the CSI 300 with the 300 most important stocks on the Chinese mainland stock exchanges stepped on the spot, while the Hang Seng in Hong Kong fell by 0.8 per cent.

Against the backdrop of the trade war with the USA, China’s foreign trade weakened again in October. Exports by China’s second-largest economy fell by 0.9 per cent year-on-year to just under 213 billion US dollars (193 billion euros) in October. Imports fell by 6.4 per cent to around 170 billion US dollars. However, both figures exceeded analysts’ expectations.

The European stock exchanges almost uniformly followed the guidelines from the USA. The EuroStoxx 50 fell on Friday by about 0.2 per cent to 3,699.65 points.

At the end of the day, the domestic DAX dropped 13,228 points, 0.46 per cent or 60.90 points less than the day before. After weeks of upwind, this represents only a minimal setback.

The euro continued to depreciate until the close of trading and was last quoted at 1.1017 dollars. The European Central Bank (ECB) set the reference price at 1.1034 (Thursday: 1.1077) dollars.

Oil prices have also fallen significantly. In the evening, a barrel of Brent crude cost 62.26 dollars, half a per cent less than the previous day. The price for a barrel of West Texas Intermediate (WTI) fell by 0.45 dollars to 57.16 dollars. The price gains of the previous day were thus more than eroded. “The euphoria over a possible trade agreement between the USA and China seems to have evaporated on the oil market,” commented Commerzbank’s commodities experts.

The gold price has already relinquished its slight early gains and fell again in the evening by 0.1 per cent to below 1,466 dollars per troy ounce. In the course of the current trading week, the precious yellow metal was seriously undermined by investors’ rising risk appetite.

Cryptocurrencies were under pressure again this Friday. Bitcoin fell to below $9,000 and is currently trading at $8,800. Ethereum and XRP followed suit as ever so often at the current stage of the digital asset space and fell by very similar percentage points like BTC. One Ethereum now trades at approximately $184 while one XRP costs $0.2780.

Outgoing EU Commission President Jean-Claude Juncker does not believe US President Donald Trump will impose new car tariffs next week, according to a report. “Trump will rummäkeln a bit, but there will be no car tariffs,” Juncker told the Süddeutsche Zeitung. According to the report, Juncker was very sure. “He won’t do it,” he said and went on: “You’re talking to a fully informed man.”

Chinese online giant Alibaba is targeting revenues of up to $15 billion from its IPO in Hong Kong. As the news agency Bloomberg reported on Friday, corresponding hearings before the authorities are already planned for the beginning of next week, as provided for by Hong Kong stock exchange law. It would be Alibaba’s second IPO – the company is already listed in New York.

With the IPO in Hong Kong, Alibaba also meets the wishes of the government. Beijing continues to encourage the country’s major tech companies to go public in China. A technology exchange is planned in Shanghai-based on the model of the US Nasdaq exchange.

The shares of Merck KGaA moved to the top of the leading German index until the close of trading. The share is approaching its record high of EUR 115.20, which was reached in May 2017. The figures for the third quarter could provide new impetus in the coming week. Analyst Dennis Berzhanin of Pareto, however, reminded today that a possible increase in the annual targets next Thursday has long been in line with market expectations. Such a step will probably be related to the sales and earnings contribution of the acquired US speciality chemicals manufacturer Versum. At the same time, Pareto increased its price target from 103 to 106 euros.