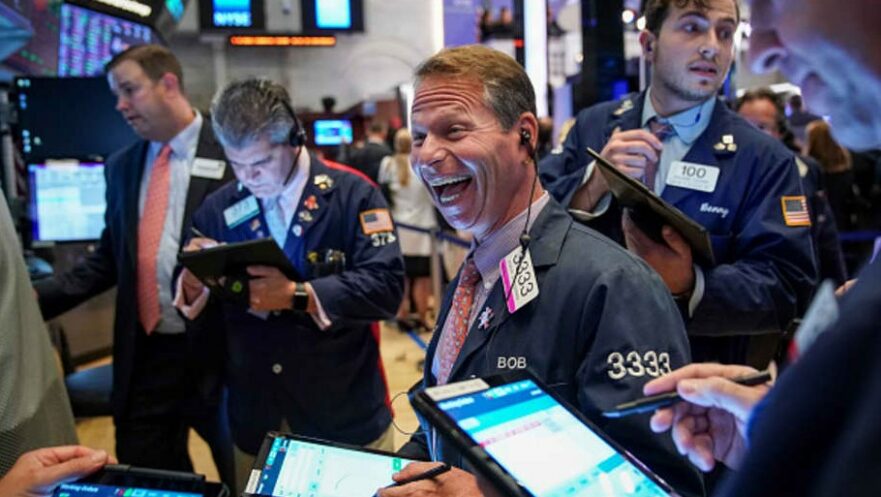 Even historically high US inflation figures did not throw the markets off track today. Investors took a deep breath after a successful week.

The latest US inflation data had been eagerly awaited this afternoon. As feared, inflation in the US continued to rise in November by 6.8 per cent year-on-year. It is data that probably only stock market veterans remember, for example, when inflation was at its highest level since 1982. But the market had perhaps feared even worse. The DAX in Frankfurt and New York’s Wall Street reacted very calmly to the figures.

Experts pointed out that other factors besides the galloping energy prices, such as some supply and goods bottlenecks, also contribute to the dynamic price development. Unanimously, the conclusion is clear: if any argument had been needed to convince the US Federal Reserve of the necessity of a more rapid exit from its ultra-loose monetary policy, it was provided by today’s inflation data.

Wall Street was slightly up before the weekend. The Dow Jones started the session on Friday on a firmer footing. It then rose by 0.61 per cent to 35,971.98 points. The tech index NASDAQ Composite also increased at the start of trading and ended the day 0.73 per cent higher at 15,630.60 points.

Inflation data from the USA was published before the start of trading. According to the Department of Labour, consumer prices rose by 0.8 per cent in November compared to the previous month and were 6.8 per cent higher than in the same period last year – the highest level since uni 1982. The rate was thus higher than experts had expected. According to experts, the figures now increase the pressure on the US Federal Reserve to initiate an accelerated exit from its bond purchases at its meeting next week.

Meanwhile, US real income fell by 0.2 per cent in November.

The shares of SAP’s competitor Oracle soared by up to 18 per cent after the figures for the third quarter were published the previous evening after the close of the stock exchange.

Buying reasons remained rare in the Far East on Friday. Conflicting reports on the Corona variant Omikron continued to dominate market activity, so uncertainty remained on the stock markets. Nevertheless, the losses were limited.

The crisis in the Chinese real estate stocks Evergrande and Kaisa continued to depress sentiment in China after the rating agency Fitch classified both companies as partially insolvent.

European markets fell only slightly at the end of the week. The EuroSTOXX 50 already lost slightly at the start and closed 0.22 per cent weaker in the evening at 4,199.16 points.

Although the DAX recovered initial losses at the end of the week, it was not enough for more. The German benchmark index ended the day 0.1 per cent lower at 15,623 points. Nevertheless, investors can be satisfied with the week’s performance, as the DAX gained around 3.0 per cent. The TecDAX was already weaker at the start of trading and remained clearly in the loss zone. In the end, it fell by 0.78 per cent to 3,832.87 units.

Inflation data was under particular scrutiny in Europe. In Germany, inflation rose to its highest level in 30 years. Data on currency devaluation in the USA were then on the agenda in the afternoon. The further rise in inflation is likely to encourage the US Federal Reserve in its more rapid tapering course and move the market to price in perhaps even four instead of the current three rate hikes by the end of 2022 as the most likely scenario.

The euro recovered losses at times on Friday and gained against the US dollar after a brief period of weakness. The common currency last cost 1.1311 dollars on the forex market. The reason for this was, among other things, the dramatic inflation data from the USA.

Oil prices gained somewhat on Friday. The significant weekly gains were thus extended somewhat after the recovery had stalled the previous day. The decisive factor for the gains was positively received news about the new Corona variant Omikron. Brent oil rose 32 cents to 74.74 US dollars, while WTI oil rose 33 cents to 71.27 dollars.

At 1,782 dollars, a troy ounce of gold cost about 0.3 per cent more than the previous day.

Cryptocurrencies remain under pressure, and most major digital assets fell further at the week’s close. Bitcoin dropped 0.7 per cent to $47,700, while Ethereum shed 4.5 per cent to $3,970. Solana and XRP slid by over 6 per cent, and Cardano’s price declined by 4.8 per cent to $1.25.

Inflation in Germany rose in November to its highest level in almost 30 years. Consumer prices rose by 5.2 per cent compared to the same month last year, the Federal Statistical Office announced on Friday. The Wiesbaden-based authority thus confirmed an initial estimate. The last time a higher inflation rate was measured was in June 1992, when it was 5.8 per cent. In October of the current year, the annual rate was 4.5 per cent.

Inflationary pressure in the USA again increased more significantly than expected in November. According to the Department of Labour, consumer prices rose by 0.8 per cent over the previous month and were 6.8 (October: 6.2) per cent above the level of the same month last year. This was the highest level since June 1982. Consumer prices excluding energy and food prices rose by 0.5 per cent on a monthly basis and by 4.9 (4.6) per cent on an annual basis.

US consumer sentiment brightened more than expected in December. The University of Michigan’s index of US consumer sentiment rose to 70.4 in the mid-month survey. Economists polled by Dow Jones Newswires had expected a reading of 68.0. The expectations index was 67.8, up from 63.5 the previous month, and the current conditions index was 74.6, up from 73.6. Consumers’ inflation expectations on a twelve-month horizon remained at the last month’s level of 4.9 per cent. On a five-year horizon, they remained constant at 3.0 per cent.