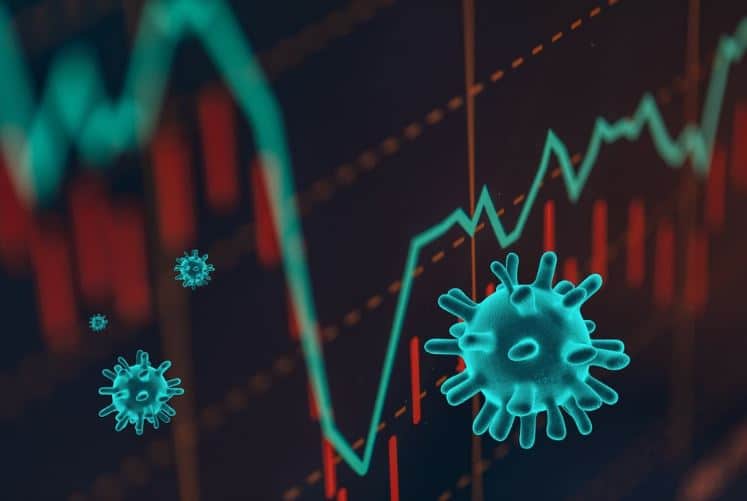 Investors are caught between hope and fear – between the liquidity boosts provided by central banks and recessionary fundamentals.

After the cautious tenor of the US Federal Reserve and rising corona case numbers in the US, investors fled back to the defensive towards the weekend – although not everywhere. Fears of a second wave of corona had dampened investors’ spirits, Credit Suisse said.

Jerome Powell, the chairman of the Fed, had already spoken out clearly in the middle of the week in the face of the severe economic crisis resulting from the corona pandemic, saying that a considerable proportion of the job losses could be permanent.

Before the weekend, the US stock market showed a clear recovery. The US leading index Dow Jones was extremely friendly and rose by 1.90 per cent to 25,605.54 points. The NASDAQ Composite also rose. It closed 1.01 per cent higher at 9,588.81 points.

After the crash the day before, Wall Street recovered somewhat on Friday. However, the situation had not fundamentally changed, and the indices, therefore, returned from their daily highs by the end of trading.

In Asia, stock markets remained under pressure on Friday after the sell-off on Wall Street on Thursday evening. However, at least the significant losses of the first trading hours could be reduced.

At times, the EuroSTOXX 50 was able to advance significantly in the course of trading, after initially falling by 0.30 per cent to 3,135.22 points. However, it ultimately relinquished most of its gains and closed 0.29 per cent higher at 3,153.74 units.

Investors on the German stock market finally lost heart on Friday shortly before the close. The Dax 30 had opened 0.78 per cent lighter at 11,876.34 points, but as the day progressed, it went into positive territory and even rose above the 12,000 point mark. It was, however, unable to hold on to its gains and fell back into the red in late trading, ultimately ending the day 0.18 per cent lighter at 11,949.28 index units. The TecDAX also fell after having been in the black for most of the trading day. It ended the day 0.34 per cent lower at 3,069.17 points.

It was the darkest week for the German stock market since the corona-crash in March. The Dax index recorded five days of losses in a row and lost a total of about 7 per cent.

On Friday, the euro went through a rollercoaster ride on the Forex market. After initial stabilization, it fell significantly. In the evening, the common currency last cost only 1.1231 US dollars, after climbing to $1.1340 in the afternoon. The euro exchange rate had already come under considerable pressure on Thursday and had fallen by about one cent. New US economic data supported the US dollar.

Extremely weak economic data today had a significant impact on the British Pound. The exchange rate against the US dollar was only $1.2550 at times, after previously standing at over $1.2650. According to the statistics office ONS, the economy of the kingdom shrank massively during the Corona crisis. Economic output fell by around a quarter between February and April – more than experts feared.

Oil prices have come under further pressure after their nosedive the day before. A barrel of North Sea Brent crude costs $38.37 on Friday afternoon, 18 cents less than the day before. The price of West Texas Intermediate (WTI) oil fell by 67 cents to $35.67 per barrel.

The most important cryptocurrencies consolidated on Friday and recorded slight increases compared to the previous trading day. Bitcoin gained 0.2 per cent to $9,400, Ethereum increased by 0.8 per cent to $236, and XRP rose by 0.3 per cent to currently $0.1930.

The aviation industry in Great Britain is taking legal action against the two-week quarantine obligation for travellers which has been in force since Monday. The British Airways parent company IAG declared on Friday that there is a joint push with the British low-cost airline Easyjet and the Irish market leader Ryanair. The airlines argue that the requirement imposed in the fight against the Corona pandemic is a burden on the crisis-ridden airlines and tourism in the country. Besides, there is no scientific necessity for the strict rules, they say.

Adobe Systems share on the way to a record high

Adobe presented its figures for the second quarter on the eve of the close of the stock market and mostly performed better than forecast. JPMorgan praised the surprisingly good margin development, which made up for the disappointment of lower than expected sales. Jefferies particularly praised the Digital Media division, which once again performed outstandingly, as analyst Brent Thill wrote.

In Nasdaq trading, the US software manufacturer’s shares temporarily rose to $411.72 after losing 4.7 per cent in the wake of the general panic attack on the US market on Thursday. At the end of the meeting, the plus was still 4.87 per cent at $406.54.

As a lesson from the corona crisis, the EU states want to make their industries more independent of the rest of the world. To avoid similar shocks in the future, it is crucial to strengthen the “resilience and independence of our strategic value chains”, said Croatian Economics Minister Darko Horvat on Friday after consultations with EU ministers responsible for industry. Croatia currently holds the Presidency of the EU countries. In a joint statement, the 27 ministers also stressed that the principles of an open economy with free and fair trade must be maintained at the same time.

During the Corona crisis, for example, there were bottlenecks in the supply of medicines because Europe is dependent on production in cheaper countries.