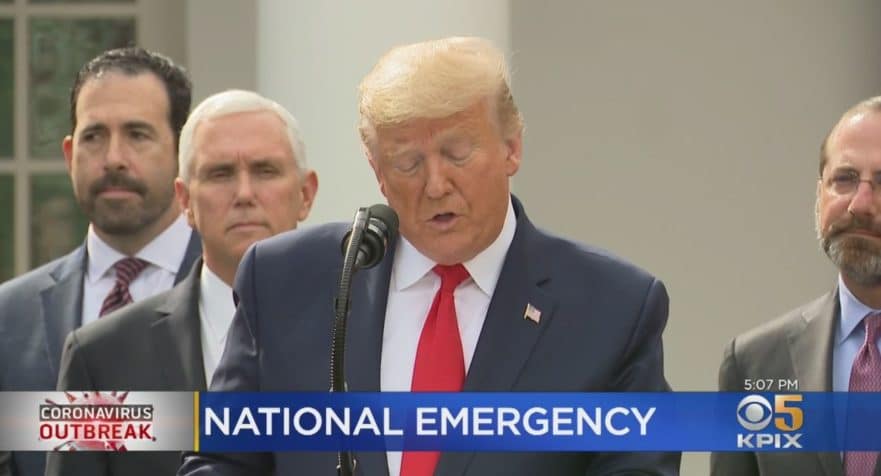 US President Donald Trump has declared a national emergency because of the spread of the coronavirus in the USA. The measure would release additional federal funds of up to 50 billion dollars to fight the novel coronavirus Sars-CoV-2, Trump said. This declaration of a state of emergency gives Trump far-reaching powers, including access to a fund with resources for disaster relief.

The spread of the virus in the USA had recently put a massive strain on the US stock markets. Analysts had described the US government’s previous measures against the virus as insufficient or inappropriate. Similarly, market experts criticised the ECB’s failure in appropriately addressing the current crisis.

Meanwhile, we are from an “all-clear situation” in the matter of the Corona crisis – on the contrary. More and more schools and public buildings are being closed, meetings and events cancelled and entry bans imposed. Public life is increasingly coming to a standstill, not only in Germany but also among its European neighbours.

Another crash on the US stock market was initially halted on Friday. In the end, the Dow Jones advanced by a remarkable 9.36 per cent to 23,185.62 points. The tech stocks index Nasdaq-Composite also made up a lot of ground, closing the day 9.35 per cent higher at 7,874 points.

The leading index was thus able to make up much of the high losses of the previous day. Nevertheless, the Dow still suffered a severe loss of more than 10 per cent in the week.

Asian stock markets fell sharply on Friday, but the major indices were able to reduce their trading losses at least slightly. In Tokyo, the Nikkei 225 Index closed six per cent lower at 17,431 points, having previously dropped below the 17,000 mark for a time. In China, the CSI 300 index recently fell by 1.40 per cent to 3895 points. The Hang Seng in Hong Kong recently fell by almost three per cent.

South Korea announced after the close of trading that it would ban short-selling for six months. Besides, central banks throughout Asia are now pumping high liquidity into the financial system to stabilise the markets.

On Friday, Europe’s stock markets were unable to make up for the previous day’s losses, but European markets always managed to make up some ground.

The EuroSTOXX 50 was much firmer at the opening, but after disappointing US figures, it only entered the weekend with a plus of 1.60 per cent at 2,586.02 points.

The leading German index closed at 9,232 points, a daily gain of 0.77 per cent. The fluctuations were once again enormous. At the day’s high, it looked for a short time as if the index could break through the 10,000 point mark again but then closed at 9,985 points. The daily low was 9,064 points over 900 points lower. This results in a dramatic weekly loss of 20 per cent. After trading, the L/E-Dax climbed to 9,432 points. The TecDAX also lost some of its substantial early gains and ended the day 1.70 per cent higher at 2,360.54 points.

The euro weakened somewhat on Friday in late US currency trading. Thus it did not benefit from a comprehensive aid package of the German government. Most recently, the common currency was paid 1.1080 US dollars. In contrast, the dollar gained too many currencies. The European Central Bank (ECB) had set the reference rate at 1.1104 (Thursday 1.1240) dollars.

Oil prices rose a little on Friday after a memorable week. Over the week, however, the biggest loss since the 2008 financial crisis remains. In the evening, a barrel of North Sea Brent cost 35.94 US dollars. That was 1.28 dollar more than the day before. The price for a barrel of the American WTI variety rose by 1.23 dollars to 32.28 dollars.

This week, oil prices have fallen by more than twenty per cent. This was triggered by several developments that indicate both falling demand and rising supply. On the demand side, the rapidly spreading virus crisis is a particular burden. The International Energy Agency (IEA) now expects demand to fall this year. Besides, the massive stock exchange turbulences come in this week. Risky investment forms, to which also crude oil belongs, were avoided actively in this environment.

On the supply side, the dispute between Saudi Arabia and Russia is causing a stir. Because the oil giants could not agree on further production cuts, the Saudis, the United Arab Emirates and Russia want to expand their production considerably.

After the massive crash on the cryptocurrencies market the previous day, most major digital assets were able to recover some of the losses. Bitcoin increased by 7.7 per cent to $5,400, Ethereum rose 9.8 per cent to $131, and XRP jumped more than 10 per cent to $0.1570.

The co-founder of the US computer group Microsoft, Bill Gates, has resigned his seat on the board of directors. Gates wants to gain more time for his various charitable engagements the company announced on Friday after the US stock market closed. However, the 64-year-old will continue to serve as a consultant to CEO Satya Nadella and the rest of the management team.

Gates had already retired from the day-to-day business of Microsoft in mid-2008 and resigned as Chairman of the Board of Directors in February 2014. His position on the Group’s top body, which is superordinate to the Executive Board, is not to be filled for the time being. The Board of Directors will thus shrink to twelve members.

Meanwhile, the consumer confidence of the University of Michigan in the USA has dropped significantly for March from 101.0 to 95.9 points. However, experts had predicted an even lower value of 95.0 points.

“Consumer sentiment is sinking under the impact of the massive price losses on the stock markets as well as concerns about the Corona pandemic and is thus probably a harbinger of a darkening economic outlook,” writes Ralf Umlauf of Landesbank Hessen-Thüringen (Helaba).

The Metro investors around the Czech billionaire Daniel Kretinsky took advantage of the fall in the share price of ProSiebenSat.1 and increased their share in the television group to more than ten per cent. According to voting rights announcements, Czech Media Invest, which is backed by Patrik Tkac and the Slovakian Roman Korbacka alongside Kretinsky, has held 10.01 per cent of ProSiebenSat.1 for a week now.