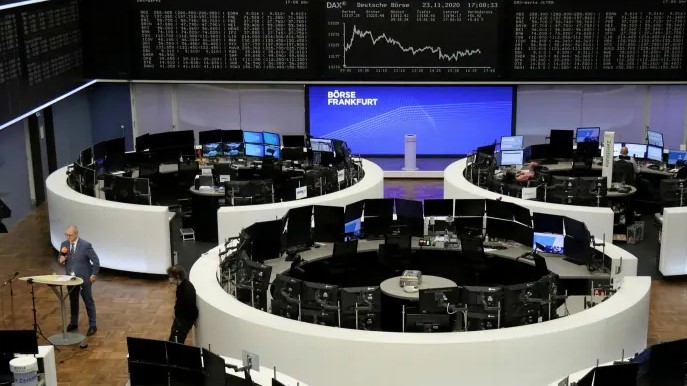 Both Wall Street and the domestic market remain on a record course after a turbulent week. Once again, the DAX in Frankfurt was the star of the day, breaking the 16,000 point mark for the first time in its history.

The corporate reporting season was again in the spotlight today, but it is now drawing to a close. A total of five DAX companies and numerous second-tier companies opened their books this week.

Wall Street was treading water on Friday. After an initial gain, the Dow Jones initially continued to rise but then slipped to the zero lines. The US leading index marked a new record high at 35,610.57 points right after the starting bell. It ended the week 0.04 per cent higher at 35,515.38 index units. The NASDAQ Composite also mainly moved sideways. The tech index also closed at 0.04 per cent stronger at 14,822.90 points.

According to Dow Jones Newswires, market observers explained the initial price increases primarily with the surprisingly good balance sheet season. This counterbalanced the sharp rise in inflation, which triggered interest rate fears and the rising corona positive test figures, which could set the economy back again.

Analysts at Deutsche Bank said that the negative signs were attributed to a combination of the ongoing Corona spread and increased regulation in China. Technology stocks were particularly affected, they said.

The European stock markets were also treading water today. The EuroSTOXX 50 ended trading with a slight gain of 0.08 per cent at 4,229.70 points, having already started the morning virtually unchanged.

The DAX was able to extend its initially small gain as trading progressed. It passed the 16,000 point mark for the first time and set another record high at 16,030.33 points. In the end, however, it went into the weekend only 0.25 per cent higher at 15,977.44 points. This meant that the leading index had now reached record levels for three trading days in a row. In contrast, the TecDAX started with a small minus and then dug itself deeper into the loss zone and closed 0.36 per cent weaker at 3,824.66 points.

Market sentiment has improved significantly in recent days, and the threat of inflation has recently been ignored. Nevertheless, investors’ worries have not vanished into thin air. “Rate hike and tapering worries are only postponed, not lifted,” said one strategist.

Meanwhile, the reporting season is drawing to a close, so there was hardly any impetus from this side before the end of the week.

Weak US consumer confidence weakened the US dollar on Friday and thus drove up the euro exchange rate, among other things. In US trading, the euro was last traded at 1.1793 US dollars. In early European business, only 1.1730 dollars was paid on the foreign exchange market.

Demand concerns continued to weigh on oil prices, with the two leading grades Brent and WTI losing around 1 per cent. Brent from the North Sea fell by 33 cents to 70.99 US dollars per barrel, while West Texas Intermediate lost 22 cents to 68.86 dollars.

Other commodities, such as precious metals, increased significantly today. Here the weaker greenback helped but especially gold bulls retook the helm and pushed the gold price back up to $1,779 per troy ounce, increasing more than $25 on the day.

It was the week of cryptocurrencies. Cyber currencies, digital assets and tokens appreciated in often multiple double-digit sizes over the past seven days. One of the biggest weekly gainers was Cardano, gaining 45 per cent and 15 per cent in just the past 24 hours. The native token ADA is now at the critical 0.72 Fibonacci retracement level, so it’s definitely worth watching what happens from here onwards. Bitcoin and Ethereum increased by 7.3 and 8.5 per cent, respectively, in the past 24 hours, pushing BTC to over $47,500 and Ether to $3,290. XRP and XLM continued their bullish movements as well, both adding a further 11 per cent on the daily to $1.06 and $0.3566.

The eurozone‘s trade surplus fell slightly in June. Seasonally adjusted, it fell by 1.4 billion euros to 12.4 billion euros compared to the previous month, as the Eurostat statistics office announced in Luxembourg on Friday. However, the surplus was higher than expected. Analysts had expected an average of only 10.8 billion euros. In addition, the surplus from May was revised upwards from an initial 9.4 to 13.8 billion euros. While exports of the 19 euro countries fell by 0.7 per cent on an adjusted basis, imports remained unchanged. In the EU as a whole, the trade surplus also declined somewhat.

The price increase of goods imported into the USA has slowed more than expected from an elevated level. Import prices rose by 10.2 per cent in July compared to the same month last year, as the Labour Department announced in Washington on Friday. Economists had expected an average rate of 10.5 per cent for July. This is the second consecutive decline in the annual rate. In May, the rate had reached 11.6 per cent, the highest level in almost ten years. Month-on-month, the increase in import prices in July also fell short of expectations. Import prices increased by 0.3 per cent. Analysts had predicted a rise of 0.6 per cent.