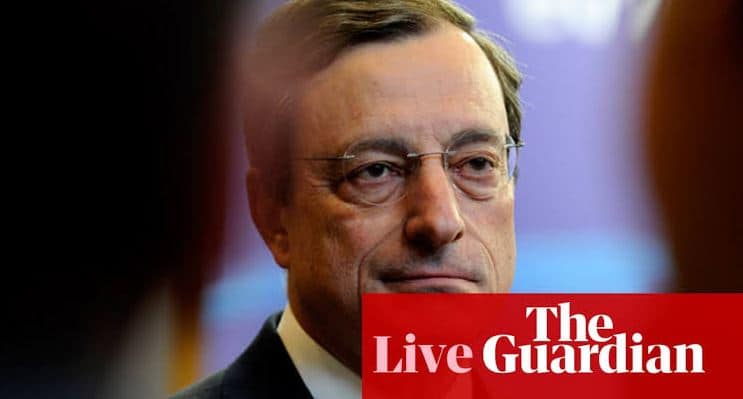 ECB President Draghi once again pulled out all the stops on monetary policy shortly before his departure. But there was considerable resistance in the Council to the decision. His successor Christine Lagarde is faced with a fait accompli.

It was Mario Draghi’s perfect farewell performance. At least by his standards. The President of the European Central Bank (ECB) once again showed it to everyone at his penultimate Council meeting. Draghi pushed through his monetary policy programme against all the odds. And he once again verbally put all his opponents – from US President Donald Trump to commercial banks to thrifty governments – in their place.

The result of the memorable ECB decision: with a deposit rate of minus 0.5 per cent, there will be even lower negative interest rates than ever before in the eurozone. And on top of that, there is a new edition of the monthly bond purchase programme, which the ECB just abandoned in January. The central bank will now pump a total of 20 billion euros into the markets again every month, without any time limit. Instead, the bond purchase program should run as long as interest rates are not raised.

Of course, the real Donald J. Trump couldn’t help himself but send a tweet out in regards to the ECB’s decision straight away: “European Central Bank, acting quickly, Cuts Rates 10 Basis Points. They are trying, and succeeding, in depreciating the euro against the VERY strong Dollar, hurting US exports…. And the Fed sits, and sits, and sits. They get paid to borrow money, while we are paying interest!”

The flood of money from the European Central Bank (ECB) ensured happy faces among equity investors. The EuroSTOXX 50 already showed a surcharge at the start of trading and was able to realise further gains afterwards. It closed 0.63 per cent higher at 3,538.86 index points.

DonaldTrump’s senior advisors are considering a transitional deal in the trade dispute with China. The news agency Bloomberg reported this yesterday regarding several informed persons. The idea is to postpone or reverse new punitive tariffs on Chinese goods if China is prepared to make concessions in return.

Speculation yesterday supported the rise in US stock prices. The Dow Jones index closed 0.2 per cent higher at 27,182 points while the broader S&P 500 gained 0.3 per cent to 3,009 points. The composite index of the technology exchange Nasdaq advanced 0.3 per cent to 8,194 points.

Investors will be accessing the stock markets in the Far East again on Friday.

Once again, the hope in the US-Chinese trade dispute could lead to a good mood. As the Wall Street Journal reports, China is trying to clear various hurdles out of the way for the negotiations taking place in October. Besides, US President Trump announced interest in a smaller interim agreement with the People’s Republic.

The euro stabilised on Friday after the ups and downs of the previous day. In the morning, the common currency traded at 1.1069 US dollars, roughly the same rate as the last day.

Thus, the renewed tightening of the already ultra-loose monetary policy by the ECB could not put a constant strain on the euro. On the previous day, the central bank had resisted the economic downturn in the eurozone with a comprehensive package of measures, including the decision to relaunch the bond purchase program. As a result, the euro initially fell to 1.0927 dollars.

Until the afternoon, market observers expect trading on the currency market to be rather impulse-low. Then, new economic data from the USA could provide for more price movement again. On the agenda are key figures on sales development in the American retail sector and consumer sentiment.

The prospect of another flood of cheap central bank money briefly drove investors into gold. The precious metal, which is often used to hedge inflation, rose in price by 1.3 per cent to 1517.28 dollars per troy ounce. Early Friday morning, however, the gold price fell below $1,500 an ounce again.

Oil prices moved very little on Friday morning. A barrel of the North Sea variety Brent cost 60.40 US dollars in the morning. That was two cents more than the day before. The price for a barrel of the American variety West Texas Intermediate (WTI) also rose slightly by four cents to 55.13 dollars. Oil prices thus stabilised for the time being after heavy losses in recent trading days.

The cryptocurrency market, and especially the more significant market cap coins and tokens, remained widely unchanged yesterday. One Bitcoin (BTC) is valued around $10,300, one Ethereum $180 and one XRP $0.2560.

As expected, inflation in Germany weakened significantly in August. The general price level increased by 1.4 per cent compared to the same month last year, according to a second estimate by the Federal Statistical Office. As expected by analysts, the authority thus confirmed an initial survey. In July, the inflation rate had still been 1.7 per cent.

Despite high inflation, the Turkish central bank once again lowered its key interest rate. The most recent change envisages a reduction of 3.25 points to 16.5 per cent. In July, the central bank had cut interest rates surprisingly sharply from 24 to 19.75 per cent. Even before today’s decision, experts assumed a further sharp cut. However, the decision was not as drastic as expected.

Commerzbank analyst Thu Lan Nguyen said that the central bank had not tended to the extreme in its decision regarding the current rate cut. This is the reason why the lira is currently rising and strengthening against the US dollar. If inflation continues to fall in the near future, the central bank still has scope for further interest rate cuts in the coming months.