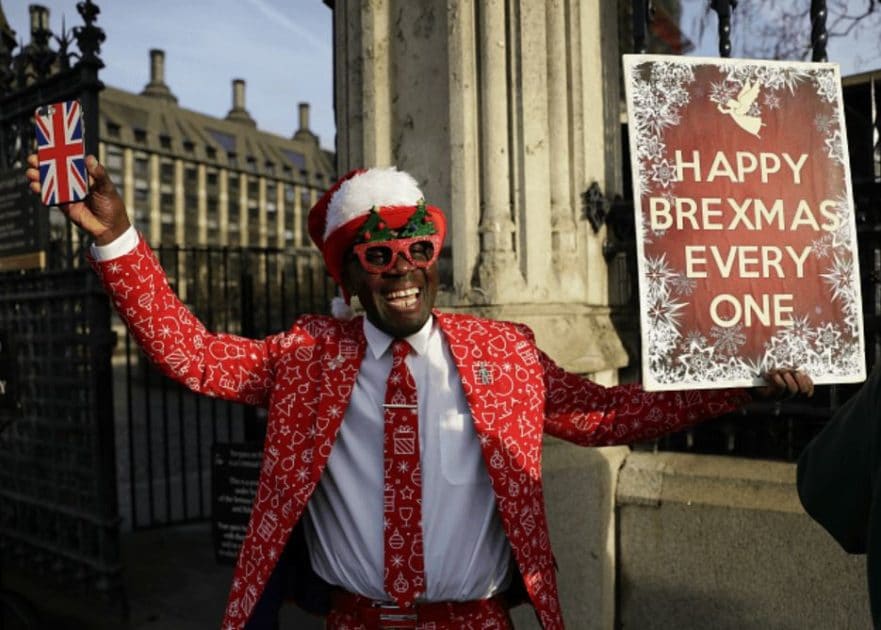 England has voted and clearly decided in favour of Boris Jonhson and thus also for an imminent end of the Brexit saga.

It is now certain that Great Britain will no longer be a member of the EU by the end of January 2020 at the latest. The vote finally creates security – even though it is far from certain how trade relations with the country will be regulated in the future. But Boris Johnson’s victory is so clear that a Brexit without a treaty has now become even less likely.

The prospect of an end to the Brexit drama as well as of an American-Chinese trade agreement drove Europe’s stock markets on Friday. Investors have, therefore, received two of the biggest gifts on their wish lists, but missing details made investors cautious.

Wall Street initially reached new highs. The Dow Jones Index climbed to 28,224 points. However, disillusionment spread as the year progressed and profits crumbled. In the end, the Dow even turned negative, as investors had anticipated the agreement that had now been reached and had already pushed prices to new highs in recent weeks.

The prospect of a breakthrough in the trade dispute is leading to significant gains in Asia. In Japan, the Nikkei 225 entered the weekend with a substantial gain of 2.55 per cent to 24,023.10 points. Equally good was the sentiment towards the end of trading in Hong Kong, where the Hang Seng gained more than two per cent to 27,562.75 points. The CSI 300 index with the 300 most important stocks on the Chinese mainland stock exchanges recorded mark-ups of 1.7 per cent to 3958.31 points shortly before the close.

The European markets cheered for the imminent end of the Brexit drama. The EuroStoxx50 gained 0.7 per cent to 3,731.07 points.

The Dax gained half a per cent to 13,282.72 points after reaching a new annual high of 13,423 points in the morning under the impression of Boris Johnson’s overwhelming victory in Great Britain.

The pound sterling went absolutely ballistic and climbed to a one-and-a-half year high of $1.3514 thanks to the clear election victory of British Prime Minister Boris Johnson. Against the common currency, it even reached 1.2079, its highest level for three and a half years. However, in later trading, the pound fell to around $1.33.

In the night on Friday, the euro rose to 1.1199 dollars but had to relinquish its gains by the close of trading.

Oil prices on Friday continued to build on the previous day’s spreads and further increased profits from early trading. US crude oil and Brent crude oil prices reached their highest levels for three months. The reason is the prospect of an agreement in the American-Chinese trade conflict. Such a deal would stimulate the economy and consequently increasing demand for oil.

Most recently, a barrel of Brent crude cost 65.12 US dollars. That was 92 cents more than on Thursday. The price for a barrel of the American West Texas Intermediate (WTI) rose by 69 cents to 59.87 dollars.

The price of gold increased by almost 0.5 per cent to nearly $1,476 in the evening after very mixed, but mostly negative signals came from the US in terms of retail prices, inflation, import and export prices.

Cryptocurrencies have been losing further ground this Friday with Bitcoin currently being valued at $7,100, Ethereum at $144 and XRP at $0.2190.

The food supplier Delivery Hero is expanding its business in Asia with a takeover worth billions. The company, which is listed on the German MDax, has secured 82 per cent of the South Korean company Woowa. In an initial reaction, the group’s share price fell by more than seven per cent in pre-market trading.

Woowa is valued at a total of four billion US dollars (3.6 billion euros). Delivery wants to put up to 1.7 billion euros in cash and up to around 1.9 billion euros in new Delivery Hero shares on the table. To this end, Delivery intends to carry out a capital increase against contribution in kind from authorized capital, excluding shareholders’ subscription rights. The transaction is expected to be finalised in the second half of 2020.

According to the delivery announcement, Woowa operates Baedal Minjok, the largest online food delivery service in South Korea, which received around 100 million orders in the third quarter. The company is also active in Vietnam. In 2018, the company’s turnover in Korea was 242 million euros. In the first nine months of 2019, the figure was already 301 million euros.

SAP’s US rival Oracle failed to meet analysts’ revenue expectations in the second quarter. In the three months to the end of November, the Group generated revenue of $9.6 billion, up to one per cent year-over-year in constant currency. On average, 9.65 billion dollars were expected.

The Volkswagen Group delivered 988,800 vehicles in November, 5.1 per cent more than a year earlier. VW has thus recorded a small increase of 0.3 per cent to 9.94 million cars in the year to date, after a small drop in sales.

The increase in deliveries in Western Europe this November was 7.5 per cent compared to the previous year; in Germany, it was plus 9.1 per cent. In China, the Wolfsburg company sold 5.1 per cent more than a year ago. Business in China thus contributed 42 per cent to the sales figures. In the USA, the increase was 14 per cent.