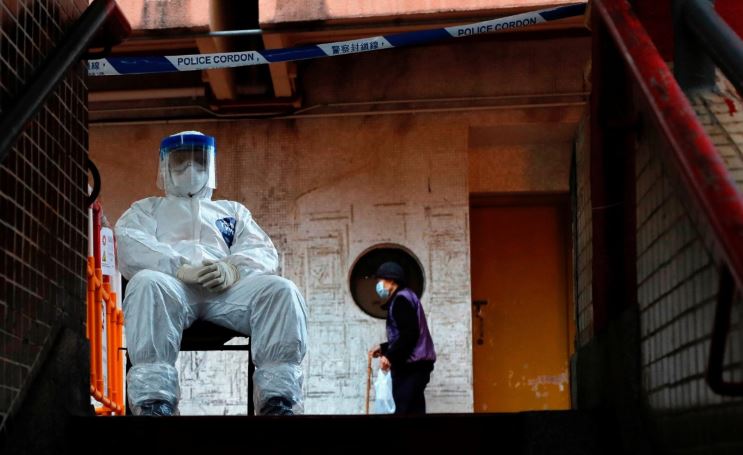 On Friday, the international stock markets continued their tendencies of inconsistency. The markets are still under the spell of the coronavirus.

Even more than six weeks after the first cases of the coronavirus were reported, the epidemic in China is not decreasing. On Friday alone, the Beijing authorities reported more than 5,000 new infections. There are now almost 64,000 people infected with the virus. Nearly 1,400 deaths have been registered. This leaves its mark on the world’s second-largest economy. In the first quarter, growth is likely to be only 4.5 per cent, the lowest rate since the financial crisis. The Chinese Automobile Association expects car sales to fall by ten per cent in the first half of the year.

The Dow Jones closed marginally weaker, falling by 0.09 per cent to 29,398.08 points. The tech stocks index NASDAQ Composite turned positive towards the end of the session and rose by 0.20 per cent to 9,731.18 points.

Business on Wall Street was restrained on Friday. However, the fact that there was no major profit-taking despite the long weekend proved the market’s strength. On Monday the US stock exchanges will remain closed because of the commemoration of the first US president George Washington.

The stock markets in Asia did not find a uniform trend on Friday. The CSI-300 index on the Chinese mainland stock exchange recently rose by 0.6 per cent. The Hang Seng in Hong Kong gained 0.4 per cent. In Tokyo, by contrast, Japan’s Nikkei 225 fell by 0.6 per cent to 23,687 points at the close of trading. The coronavirus continues to cause uncertainty.

Before the weekend, the mood in Europe was characterised by restraint. The EuroSTOXX 50 was at a standstill for most of Friday trading and finally ended the day with a small minus of 0.15 per cent at 3,840.97 points.

At times, the German leading index Dax rose to a new historic high of 13,788 points. But it was not enough to jump over the 13,800 mark. In the late afternoon, it lost all of its gains and closed almost unchanged at 13,744.21 points. The TecDAX was even firmer in early trading, but then turned into a loss and finally closed the weekend 0.44 per cent lower at 3,265.31 points.

Although the general mood was friendly, there was also a great willingness to take profits. In connection with the recent sharp rise in the number of people infected with the coronavirus, a new statistic confused market participants.

The euro was barely able to recover from its losses in US trading on Friday in the past days and weeks. After the common currency fell to a three-year low of $1.0827 in early European trading again, it recently cost only slightly more at $1.0840. The European Central Bank set the reference rate at 1.0842 (Thursday: 1.0867) dollars. Against the Swiss franc, the euro stood at 1.0607 francs, its lowest level in four and a half years.

Oil prices on Friday continued their cautious recovery of recent days. However, the risks of setbacks remain high due to the corona epidemic in China. A barrel of North Sea Brent crude cost USD 57.12 at the last count. That was 79 cents more than the previous day. The price of American WTI crude oil rose by 56 cents to 51.98 dollars. Oil prices have already been recovering for several days from their heavy losses since the beginning of the year. Traders attribute this to the generally friendlier market sentiment, which benefits riskier asset classes such as commodities. However, worries about the economic impact of the coronavirus crisis and uncertainty regarding the reaction of major producing countries remain crucial issues in the oil market.

The gold price continued its upward trend and closed at almost $1,583.

Cryptocurrencies remained almost unchanged, defending their gains from the previous days. A Bitcoin currently costs approximately $10,300, while Ethereum is valued at $275 and XRP at $0.33.

The Royal Bank of Scotland, still nationalised more than a decade after the world financial crisis, wants to leave its turbulent past behind with a name change. In the year, the name is to be changed to NatWest Group, as the British financial institution announced on Friday.

RBS will thus adopt the name of the National Westminster Bank, or NatWest for short, which was purchased in 2000. RBS boss Alison Rose, who has only been in office since November, wants to make the bank’s restructuring visible to the outside world.

To reduce costs, the manager intends to roughly half the size of the Group’s investment banking division, NatWest Markets, measured in terms of risk-weighted assets. Also, the retail banking business relating to current accounts and loans is to be more automated.

In 2019, the bank will earn money again for the third year in a row. 3.1 billion pounds were on the books, but the net interest margin declined. The share price fell by more than 6 per cent.

Italian bonds bucked the trend, and the yield rose to 0.927 per cent. They suffered in part from the latest economic data: The economy in Italy is still lagging behind the development in other European countries and disputes within the government compound this effect. The party of former Prime Minister Matteo Renzi boycotted a cabinet meeting in the dispute over judicial reform. Prime Minister Giuseppe Conte indicated that he might be prepared to resign. “The government is crunching, and the more time goes by, the more you realise that it is a community of convenience and that the parties do not fit together,” said Commerzbank expert Marco Wagner.

Canopy Growth shares remained strong until the end of trading on the NYSE and ultimately rose by 13.37 per cent to USD 22.13. At times, it had even climbed to $23.90.