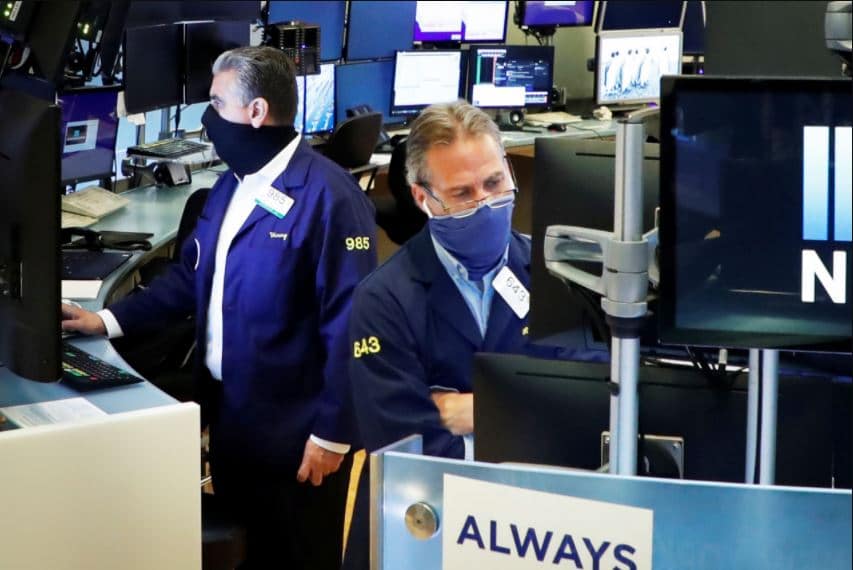 Fearing new travel restrictions with corresponding consequences for the economy, investors withdrew from the European stock markets on Friday. However, new impulses could come from America.

Today, in addition to the political situation in the US, the rising number of new corona infections in Europe also weighed on prices. If travel within the European Union is again restricted until autumn, this would have devastating consequences for the economy, which is currently recovering, economists warned.

According to market experts, the markets are currently in a stalemate. However, if an agreement is reached in Washington between Republicans and Democrats on a Corona aid package, investors could use the opportunity to send markets further north. But if the program is disappointing, a major correction in prices could also occur.

In addition, new talks between the USA and China regarding the trade agreement are on the agenda this weekend.

On Friday, Wall Street presented itself in a reserved manner. The Dow Jones showed no clear direction before the weekend and ended the trading day a marginal 0.12 per cent higher at 27,931.02 points. The tech index NASDAQ Composite was mostly in the red and closed the session 0.21 per cent lower at 11,019.30 index units.

In the run-up to the talks between delegations from China and the US taking place over the weekend, there was restraint, although expectations of real progress to resolve the dispute are rather low. On top of this comes the ongoing stalled talks between Republicans and Democrats about a new stimulus package. The market still expects an agreement on this, but a non-agreement could lead to a bigger correction in the market.

Investors on the Asian stock exchanges were mostly restrained at the end of the week, but most markets ended higher nonetheless. Chinese economic data painted a mixed picture of the country’s continued recovery from the corona shock.

European markets continued to decline on Friday. The EuroSTOXX 50 ended the session 1.13 per cent lighter at 3,305.05 points.

Across Europe, the number of new corona infections is currently rising again. In this context, investors are concerned about the new quarantine measures associated with this, especially in Great Britain. Given this development, they fear that the time of open borders could come to an end.

Also, there is still no agreement on a new stimulus package in the US, while retail data from China has dampened sentiment internationally.

In the Forex market, the euro continued to rise in US trading on Friday. At the close of trading on Wall Street, the common currency was traded for 1.1838 US dollars.

After having gained slightly in early trading, oil prices turned negative before the weekend started. A generally gloomy mood on the financial markets also pulled oil prices down. North Sea Brent crude was sold 28 cents cheaper than the previous day at 44.68 US dollars. The US West Texas Intermediate (WTI) oil price fell by 27 cents to 41.97 US dollars.

The gold price remained in a rather narrow trading range throughout the day and closed slightly down at $1,945 an ounce.

Last but not least, cryptocurrencies extended their bull run and many of the top valued digital assets recorded further gains. Bitcoin rose by almost 1 per cent to $11,790, while Ethereum increased by over 6 per cent to $438 and XRP by 5.4 per cent to $0.3040. Only ChainLink went into consolidation after the previous run-up and closed 5.6 per cent lower at $16.60.

Even the Chinese retail sales, which was in part severely affected by the corona crisis, is recovering only slowly. Retail sales in July fell by 1.1 per cent year-on-year, according to the Statistics Office in Beijing on Friday. Experts had already hoped for a return to growth in July and expected a mini plus of 0.1 per cent on average.

The US industry increased its production for the third month in a row after the slump in spring. Companies produced 3.4 per cent more in July than in the previous month, the Fed said. Economists surveyed by Reuters had expected an increase of only 3.0 per cent. In June, industrial companies had increased their production by 7.4 per cent.

In contrast, the recovery of US retail sales slowed down noticeably at the beginning of the second half of the year. In July, they took in 1.2 per cent more than in the previous month; economists had expected a plus of 1.9 per cent. In June there had still been a growth of 8.4 per cent.

The fact that new restrictions would considerably weaken the economy is shown by the 12.1 per cent slump in GDP in the eurozone in the second quarter. This was the sharpest decline since statistics began in 1995.

Container shipping line Hapag-Lloyd increased its profit in the first half of the year. After a good start to the financial year, transport volumes declined significantly in the second quarter due to the corona pandemic. Still, the group profit improved to 285 million euros in the first six months, almost twice as much as in the same period last year. Hapag-Lloyd referred to lower costs and cost-cutting measures.