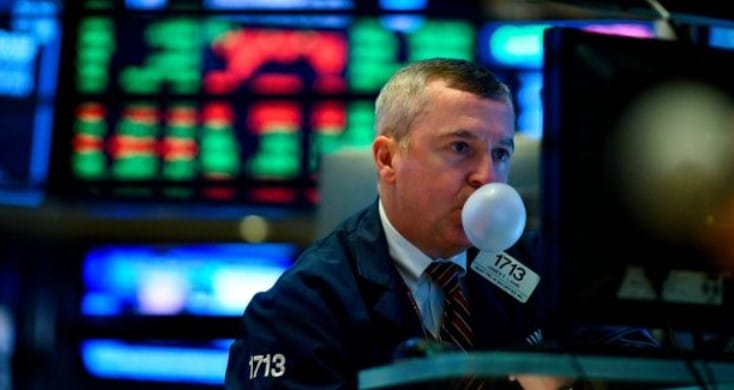 Concerns about an even stricter lockdown in Europe dragged the stock markets down further at the end of the week. Even the biggest market optimists now realise that the economy is likely to be hit the hardest if Merkel and co. tighten the reins even further. In the USA, the latest economic data also showed that corona and the way the world leaders are handling it also affect consumer sentiment there.

Corona concerns are also growing in other parts of the world. The resurgence of the pandemic in China is causing unease. The government in Beijing imposed lockdowns over several cities. China is likely to be the only major economy globally to record growth in the corona year. Economists estimate that the Middle Kingdom economy grew by around 2.0 per cent last year because of the Corona pandemic – the slowest pace in about four decades. In 2019, GDP still grew by 6.1 per cent.

The planned almost two trillion US dollar corona bailout package of the future US President Biden could, all of a sudden, not lift investors’ mood anymore. They now fear that the government is likely to raise taxes sharply to finance it.

At the start of the reporting season in the USA, big banks such as JPMorgan, Wells Fargo and Citigroup presented their figures in the pre-market. News of a new economic stimulus package possibly to be launched by future US President Joe Biden suddenly failed to support the markets today. There will be no trading in the USA on Monday due to the holiday.

Besides, investors focused on a whole series of US economic data: producer prices rose in December as expected. Retail sales, on the other hand, fell much more than had been feared.

Once again, the Asian markets did not find a common trend at the end of the week. The Japanese benchmark index Nikkei fell by 0.62 per cent to 28,519.18 points. On the Chinese mainland, the Shanghai Composite ultimately exited trading almost unmoved at 3,566.38 points. Meanwhile, in Hong Kong, the leading index, the Hang Seng, was 0.27 per cent firmer at 28,573.86 index units.

While technology stocks were the main gainers the previous day, the market was characterized by profit-taking on Friday. Negative news from the USA also weighed on the market. Surprisingly poor data on the labor market disappointed on Thursday. Nevertheless, the soon-to-be US President Joe Biden plans for another economic stimulus package provided some hope.

The worry lines of European investors are deepening again. The markets suffered from this today, and there were significant declines. The EuroSTOXX 50 index was already in the red at the start of trading and extended its losses in the day. By the end of Friday’s trading session, it had fallen by 1.15 per cent to 3,599.55 index units.

The German benchmark index also recorded losses before the weekend. The Dax started trading lighter on Friday and slipped deeper into the red as it progressed. In the end, the index was down 1.44 per cent at 13,787.73 points. The TecDAX also opened with red signs and subsequently fell further. It finally went into the weekend 0.9 per cent weaker at 3,262.41 points.

Investors in the European stock market took profits and acted with more caution before the weekend. At the same time, in the USA, the reporting season officially started with the publication of the business figures of major US banks such as JPMorgan and Citigroup.

In Germany, political discussions about a timely tightening of restrictions – including calls for a complete lockdown – also increased. This means that the hoped-for economic recovery could become a reality later than market participants had hoped.

The euro lost further ground and was trading at only 1.2075 US dollars in the evening. On the other hand, the greenback was once again sought as a safe haven.

Oil prices came under considerable pressure on Friday. Financial market sentiment was poor ahead of the weekend, dragging crude oil prices down with it. Several triggers were cited, including disappointingly received quarterly figures from major US banks, persistently high Corona infections in many countries and delayed delivery of Corona vaccines in Europe. Northsea Brent was traded for $1.37 less in the evening at 55.05 US dollars than on Thursday. The price of a barrel of US West Texas Intermediate fell by $1.32 to 52.25 US dollars. At times, prices had slipped even more.

The precious metal gold traded in the same narrow trading range as it did the whole week. At times it reached highs of $1,857 but then fell after the greenback gained strength in the Forex market. Gold’s closing price recorded at just $1,828 per troy ounce.

The cryptocurrency market came under renewed seeling-pressure at the start of the weekend but could limit its losses in the end. The overall market capitalisation held above 1 trillion US dollars with Bitcoin’s price losing 5.2 per cent to $37,300. Similarly, Ethereum lost 4.9 per cent to $1,190, and XRP was dropping by 5.1 per cent to $0.2850. In demand were once gain so-called DeFi coins like Pokadot and ChainLink. Polkadot now established itself as the number 3 digital asset by market cap, trading at around $14.60. ChainLink improved by 19 per cent and reached the $22 for the first time.

US retailers’ sales fell more drastically than expected in December. Total sales fell 0.7 per cent from the previous month. Economists surveyed by Dow Jones Newswires had expected a consensus decline of only 0.1 per cent.

Consumer sentiment in the United States weakened in January. The University of Michigan’s index of US consumer sentiment fell to 79.2 in the mid-month survey. Economists polled by Dow Jones Newswires had expected a reading of 79.4. In the survey at the end of December, it was still at 80.7.

The industry in the USA expanded its production much more strongly than expected in December. Industrial production increased by 1.6 per cent compared to the previous month, according to the Federal Reserve. Economists surveyed by Dow Jones Newswires had forecast an increase of only 0.5 per cent.

Business activity in the New York metropolitan area’s manufacturing sector fell in January, contrary to expectations. The Federal Reserve Bank of New York’s index of general business activity in the District’s manufacturing sector declined to plus 3.5. At the same time, economists surveyed by Dow Jones Newswires had projected an increase to plus 6.0.

After quarterly results, some of which were better than expected, the shares of US banks JPMorgan, Citigroup and Wells Fargo struggled. Of course, bank stocks have been going up for a few weeks, and there is a lot of good news already in the prices. Wells Fargo and Citi’s share prices dropped about 6 per cent while JPMorgan shares lost just about 1 per cent.