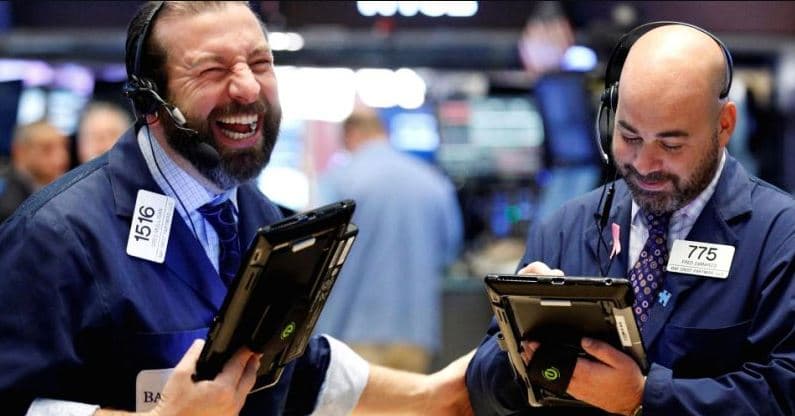 Wall Street was once again in record fever before the weekend. By the end of floor trading in Frankfurt on Friday, the Dow Jones Index had reached a new all-time high. The mark of 27,900 points was crossed for the first time. Apparently, many investors in New York are already counting on a settlement in the trade dispute between the USA and China soon to take shape. Positive signals came from Larry Kudlow, Donald Trump’s chief economic advisor, who said the US president was satisfied with progress towards a “phase-one trade agreement” – a first agreement was within reach.

Previously, US economic data had initially disappointed but had only been able to stop the Dow in its upward movement for a short time. In October, the US industry reduced its production for the second time in a row and also significantly. However, the strike at the large car manufacturer General Motors (GM) probably played a role. Car production fell sharply. US retail prices rose by 0.3 per cent in October, slightly more than economists had expected.

The Dow closed at a record high of 28,004.98 points, 0.8 per cent above its previous day’s close. At the same time, the NASDAQ Composite rose to plus at the start of trading and then remained in the profit zone. Its closing level: plus 0.73 per cent at 8540.83 points, a new all-time high.

The stock markets in the Far East did not find a uniform trend on Friday.

In the course of the day, weaker-than-expected US economic data put the dollar under pressure, while the euro received a boost in return. At first, the Empire State Index, which measures industrial sentiment in the state of New York, had surprisingly clouded over. Subsequently, US industrial production fell more than expected in October. However, the unique effect of a strike at the large car manufacturer General Motors (GM) may have played a role.

Trade with the TOP Forex Brokers that Offer a Free VPS Service.

Oil prices started to rise again on Friday evening. A barrel (159 litres) of Brent North Sea oil costs 62.35 US dollars in the afternoon. The price for a barrel of the American variety West Texas Intermediate (WTI) fell by 21 cents to 57.76 dollars. Currently, the troy ounce of gold is traded 0.4 per cent lower at just under 1,466 dollars.

Cryptocurrencies took another small hit on Friday. The overall market capitalization shrank to just $233 billion, and the leading three digital assets lost approximately 3 per cent. A Bitcoin thus currently costs $8,400, one Ethereum $185 and one XRP $0.26.

Next cannabis group breaks down

In addition, only 12.5 tonnes of cannabis was placed on the market in the past quarter – compared to 17.7 tonnes in the same quarter last year. On the other hand, the Canadian company reported production of 41.4 tonnes of cannabis – an increase of over 40 per cent compared with the end of July. This development was due to the more efficient production process: production costs per gram were reduced from 1.14 to 0.85 Canadian dollars. “Our production with this high quality at low cost was specially designed to be reproducible and scalable,” explained Aurora-CCO Cam Battley in a conference call.

However, the increase in production did not in the least appease investors. In the pre-trade on the NYSE, the hemp company’s paper was already rushing through the roof. In the early official trading it went down 11.09 per cent to 2.93 US dollars – in the further course of trading it went still further into the minus. The share closed 17.02 per cent cheaper for 2.73 US dollars. This continues the downward trend: the evening before, the share price closed 7.32 per cent cheaper at 3.29 US dollars per share.

Alibaba for the second time

The Internet group’s IPO in Hong Kong has met with great interest. The issue was several times oversubscribed, according to a press release to investors. People familiar with the IPO also spoke of it. The Chinese Amazon rival wants to raise 13.4 billion dollars with the second IPO. The issue price is to be fixed on 20 November, the first trading day in Hong Kong is scheduled for 26 November.

Applied Materials delighted investors with its sales outlook for the first quarter. The world’s largest chip plant manufacturer announced after the close of trading in the USA that it expects revenues of $4.1 billion-plus or minus $150 million for the three months thanks to high demand for processor chips. Experts surveyed by Reuters had so far only expected revenues of 3.71 billion dollars.

In the fourth quarter (ended 27 October), net profit fell from $757 million to $698 million. Turnover fell by 0.1 per cent to 3.75 billion dollars. However, both figures exceeded analysts’ expectations. The development of Applied Materials is seen as an indicator of the state of the semiconductor industry. The Applied share climbed by more than seven per cent in New York trading.