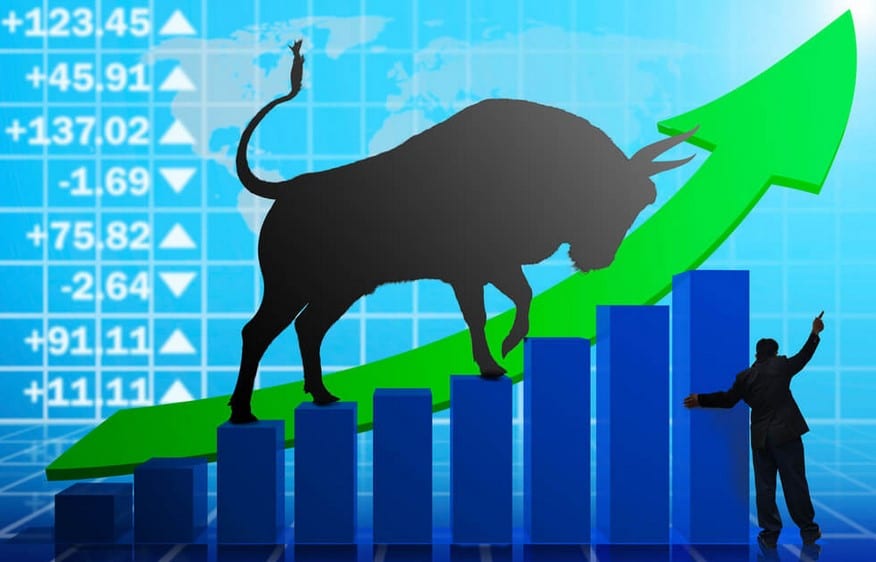 On the world’s leading stock exchange in New York, the bulls are not distracted by Corona news or waves of bankruptcies. The prospect of a strong economic recovery continues to drive the markets to dizzying heights.

Today, it was the blue chips that were particularly popular with investors. Although technology stocks have also been in demand again recently in the wake of easing interest rate and inflation fears, the increasingly real prospect of a strong recovery of the economy after the crisis is currently benefiting standard stocks of the “old economy” more than anything else.

However, tech stocks, like tech-heavyweights Microsoft or Apple, are also represented in the Dow Jones index, and both sectors are also represented in the broader S&P 500 index. What is spectacular here is not so much the rises themselves but rather the consistency with which they have been performing again and again for weeks now. How long this can continue, however, is questionable.

Despite the price rally of the past weeks and months, experts still see further upside potential. According to the market experts, after two recent rounds of stimulus from the US government, and thanks to continued progress on the vaccination campaign, evidence mounts that economic activity in the US is picking up steam.

Moreover, corporate cost pressures are largely temporary and can be offset by sales growth. Today, the big bank Morgan Stanley was also in the spotlight with its quarterly reports.

The major stock exchanges in the Far East were also able to make gains on Friday. The Japanese benchmark index Nikkei closed with a gain of 0.14 per cent at 29,683.37 points. China also saw an upward trend. On the Chinese mainland, the Shanghai Composite rose 0.81 per cent to 3,426.62 points. In Hong Kong, the leading index Hang Seng rose 0.61 per cent to 28,969.71 index points.

Investors were pleased that the Chinese economy has largely overcome the corona crisis and started the new year with record growth. Gross domestic product rose by 18.3 per cent between January and March compared to the same period last year. However, it is vital to bear in mind that China’s economy slumped the previous spring sharply.

New record highs on Wall Street also acted as a price driver on the Asian stock markets. On the other hand, the number of corona cases rising in many places in Asia had a somewhat dampening effect on sentiment.

The European stock markets were also stronger on Friday.

The EuroSTOXX 50, for example, started the day barely changed but then gained in the further course of trading and managed to jump above the 4,000 marks. The index went into the weekend 0.99 per cent higher at 4,032.99 points.

On the economic side, strong data from the USA and GDP growth of over 18 per cent in China provided a positive impetus. On the corporate side, investors were pleased with exceeded quarterly report expectations from Daimler, HeidelCement and L’Oréal.

The euro gave back some of its initial gains in late US currency trading on Friday. At the close of Wall Street trading, the common currency stood at 1.1976 US dollars. During the European forex trading session, the euro had missed the jump above 1.20 US dollars. The euro and other major currencies received support from a weaker greenback, which was weighed down by the positive mood on the stock markets.

Oil prices fell slightly during the day. North Sea Brent fell by 11 cents to 66.83 US dollars per barrel. US light oil of the West Texas Intermediate (WTI) variety fell by 30 cents to 63.16 dollars.

On the other hand, Precious metals benefited from the weaker dollar and were able to expand their weekly gains. Gold rose as high as $1,783 before it consolidated at $1,774, which was still a daily gain of over 10 US dollars.

Cryptocurrencies moved sideways again, with Bitcoin hovering around the $63,000 mark. Ethereum gained some more momentum and rose above $2,500, while XRP and Binance Coin held steady at their previous day’s price levels.

China’s economy has largely overcome the corona crisis and started the new year with record growth. As the Beijing statistics office announced on Friday, the world’s second-largest economy grew by 18.3 per cent in the first three months compared to the first quarter of the previous year. This is the most significant jump since the quarterly evaluation began a good 30 years ago. The extraordinary strong growth can be explained by the fact that the Chinese economy slumped sharply last spring due to the corona crisis and shutdowns of the economy. At that time, the world’s most populous country came to an almost complete standstill for several weeks.

Inflation in the eurozone developed as expected in March. As Eurostat reported in its second publication, consumer prices rose by 0.9 per cent compared to the previous month and were 1.3 (February: 0.9) per cent above the level of the same month of the previous year. Core consumer prices (excluding volatile elements such as energy and food) increased by 1.0 per cent on a monthly basis and by 0.9 (1.1) per cent on an annual basis.

Foreign trade in the eurozone and the European Union (EU) was rather weak in February. In the 19 euro countries, exports fell by 2.5 per cent compared to January, seasonally adjusted, as the statistics office Eurostat reported in Luxembourg on Friday. Imports, on the other hand, increased by 3.4 per cent. The trade surplus, i.e. the difference between exports and imports, fell from 28.7 billion euros in January to 18.4 billion euros. Analysts had expected a higher surplus of 22.0 billion euros on average.