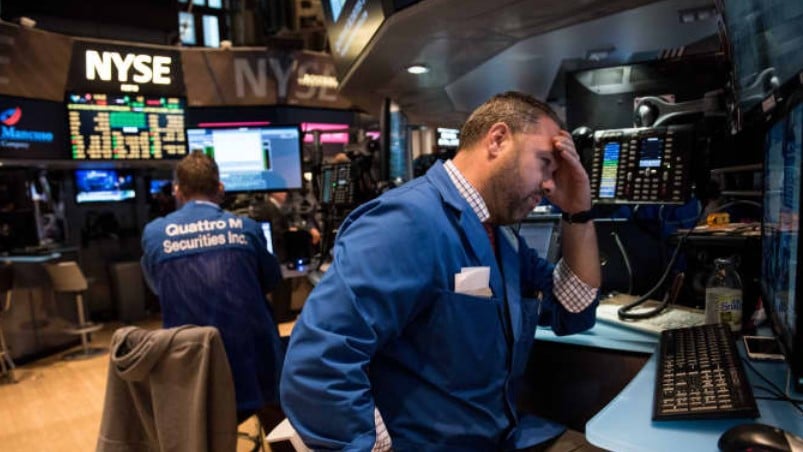 The rise in bond yields again caused headaches for investors today. The benchmark ten-year US bonds were quoted at 1.744 per cent, only slightly below their 14-month high on Thursday. In recent weeks, the rise in yields had fueled speculation of early interest rate hikes and unsettled the stock markets.

The background to the fears is the possible consequences of the US government’s 1.9 trillion dollars economic stimulus programme. This is because the enormous liquidity boost, together with the USA’s successful vaccination campaign, leads to rising growth and inflation expectations. At the same time, the Federal Reserve is willing to tolerate such excessive inflation rates at least until the labour market recovers. Ten million jobs have still not been filled as a result of the corona crisis.

In Europe, meanwhile, the spectre of a 3rd wave of corona and thus of a prolonged and intensified lockdown is being raised by the presentation of a renewed increase in new infection figures.

The controversial PCR tests, which show extremely high false-positive results, are still being used almost exclusively. Why, after more than a year, such indiscriminate and random testing is still being carried out and why the results are being used as a basis for serious economic and social decisions is a mystery to many people and institutions.

A possible escalation of the situation and a tidal wave of public protests, strikes and lawsuits can no longer be ruled out in many countries.

In New York, price movements were unsteady at the end of the week and testified to investors’ particular uncertainty. On the Nasdaq technology exchange, the optimists prevailed after losses at the opening and helped tech stocks to make gains.

The Dow Jones started Friday’s session already marginally weaker and ultimately fell 0.71 per cent lower at 32,628.10 points. The NASDAQ Composite started the session with slight gains and, after a volatile trading session, exited 0.76 per cent higher at 13,215.24 points.

Traders were sceptical about the Fed’s ability to maintain its ultra-loose monetary policy in the medium term. The rising bond yields in the USA are seen as an indication of this.

Investors were also concerned about the worsening tone between the US and China. A renewed flare-up of conflict between the two countries could weigh heavily on market sentiment. Meanwhile, quarterly figures were presented by Nike and FedEx.

The Asian stock exchanges posted losses across the board at the end of the week. The Japanese benchmark index Nikkei lost 1.41 per cent to 29,792.05 points by the closing bell. The Shanghai Composite went into the weekend 1.69 per cent lower at 3,404.66 units, while the Hang Seng Index ended the week down 1.41 per cent at 28,990.94 points.

A renewed rise in bond yields in the USA, which had already weighed on Wall Street prices on Thursday, now also weighed on Asia’s sentiment. Besides, demand concerns prevailed, especially in the commodities sector.

The European stock exchanges also lost some ground at the end of the week. The EuroSTOXX 50, for example, was already lighter at the start of trading and finally went into the weekend 0.79 per cent lower at 3,837.02 points.

The DAX, which had reached a new record high of 14,804 points the previous day, closed 1.1 per cent lower at 14,621 points on Frankfurt’s stock exchange. There is still a slight gain of just under 1 per cent for the leading German index on the weekly chart. The TecDAX was also down and closed 0.80 per cent weaker at 3,372.76 points.

Due to the big expiry day and the rapid rise in yields in the USA, there was volatile trading on Friday. According to market participants, however, there was no cause for alarm as profit-taking was normal in the current situation.

The greenback again gained against many currencies on the foreign exchange market. However, the gains were smaller than on the previous day, as the bond markets’ situation calmed down. The euro suffered again and was trading at 1.1904 US dollars in the late evening.

The gold price was able to stabilise further at the end of the week. The price per troy ounce of the precious metal rose by 0.4 per cent to 1,742 US dollars.

Digital assets further stabilised with Bitcoin holding above $58,000 and Ethereum adding 2.7 per cent to $1,833. The biggest gain of all top 10 cryptocurrencies saw Polkadot rising 12 per cent to $39,80.

In Japan, consumer prices have fallen for the seventh time in a row despite the extremely loose monetary policy. At least the pace has slowed. In February, consumer prices excluding fresh food prices fell by 0.4 per cent compared to the same month last year, as the government announced in Tokyo on Friday. In January and December, the price index had fallen by 0.6 per cent and 1.0 per cent, respectively.

Producer prices in Germany rose noticeably in February. There was stronger price pressure for intermediate goods in particular. Compared to the previous month, Germany’s producer prices climbed by 0.7 per cent, as reported by the Federal Statistical Office (Destatis).

Russia’s central bank has surprisingly raised the interest rate to 4.5 per cent from the record low of 4.25 per cent, it announced in Moscow on Friday. “The rapid recovery of demand and increased inflationary pressures call for a return to a neutral monetary policy,” the central bank said, explaining its move. At the same time, it expressly reserved the right to raise interest rates further in the coming months.

In February, the inflation rate had risen to 5.7 per cent, after being 5.2 per cent at the beginning of the year. The central bank is aiming for a rate of about four per cent. According to its forecasts, it will not reach this level again until the first half of 2022. Cheap money can boost consumption and investment, but it can also boost inflation by increasing demand.

The rouble appreciated after the decision. Higher interest rates make the currency more attractive to investors. At the same time, a stronger rouble can make imports cheaper and thus help to moderate inflation. Brazil and Turkey also raised their interest rates this week to counter inflation risks. The European Central Bank and the US Federal Reserve, on the other hand, continue to maintain their policy of ultra-low interest rates.