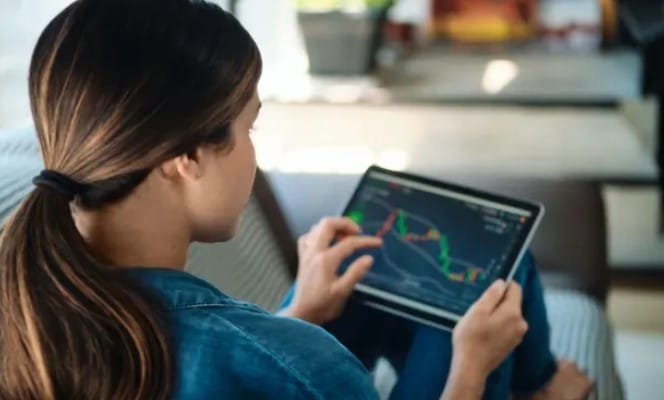 The US stock markets did not find a clear direction at the end of the week. Corona concerns split over and weighed on the blue chips while tech stocks continued their record run. Tech stocks were driven both by some good corporate news and by the continued favorable environment. For example, the US Federal Reserve wants to take its time in regards to an interest rate hike, which many economists believe is the sharpest sword to fight inflation. Low-interest rates make it easier to finance the usually very growth-oriented companies in the industry.

Beyond the tech stocks, however, gloom reigned in the market as fears of new lockdowns dampened the spirits of markets outside the tech sector.

With new corona restrictions in place in many parts of the world, traders spoke of a resurgence in “corona trading”, with technology stocks in particular demand. Concerns about new restrictions also impacted, with traders talking of a flight to perceived safety. Thus, US bonds rose – as did the greenback.

In addition to the Corona headlines, investors also had to digest business figures on the stock market. Applied Materials was down 5.5 per cent, and Workday was down 4.2 per cent. Applied Materials missed analysts’ expectations due to problems in the supply chain despite significant profits and sales. The outlook was also disappointing. At Workday, on the other hand, the market apparently acted according to the motto that good is not good enough, because here the business figures exceeded market expectations. Workday also raised its outlook. The company also announced an acquisition worth 510 million dollars.

After the previous days’ losses, there was – at least in part – a countermovement on the Asian markets on Friday. One exception was Hong Kong, where the market fell sharply. The focus there was on the real estate group Country Garden Services and Alibaba. While Country Garden Services is struggling with liquidity problems and needs money, the Alibaba share was also under pressure after presenting weak business figures the previous day.

Investors on the European stock exchanges were unsettled on Friday. The EuroSTOXX 50 started the day only marginally higher and was then able to advance somewhat more clearly into the plus zone. In the day, however, it turned into the loss zone and fell by 0.62 per cent to 4,356.47 index units by the end of the session.

The winning streak on the German stock market broke today. The DAX index, which recently set new records on six trading days in a row, fell moderately by 0.38 per cent and closed at 16,159 points. Compared to the previous week, the DAX hardly moved at all. Since the beginning of October, however, the DAX has risen significantly by almost 1,400 points. The TecDAX, on the other hand, after a small gain at the start of the day, was able to record further increases in the day and closed up 0.51 per cent at 3,986.96 points.

At the end of the week, prices on the markets in Europe had slipped into negative territory after initial gains in the face of rising corona positive figures and lockdown concerns.

The euro fell further and was noticeably weighed down by heightened Corona fears on Friday. In US trading, the European single currency cost 1.1285 dollars. The low for the day was even lower at 1.1251 dollars.

Oil prices came under significant pressure on Friday due to new Corona fears and lockdown concerns. North Sea Brent lost 3.8 per cent, while losses in US light oil WTI were even higher at over 4.6 per cent. Otherwise, the market is still preoccupied with the possible release of strategic oil reserves by major economies. China has already announced such a step, and a release has been debated for some time in the USA. According to several media reports, the US government wants to encourage other large consumer countries such as Japan, South Korea or India to take similar steps.

Gold and other precious metals came under pressure with the strengthening of the US dollar. The gold price slid by almost $15 to $1,846 per troy ounce.

The intermediate downward movement on the cryptocurrency market came to a halt today, especially so-called altcoins reversed quite significantly. Bitcoin gained 1 per cent to $57,880, while Ethereum fared much better, adding 7 per cent to $4,300. Solana even rose by 10.4 per cent to $215, and Binance Coin gained 9.8 per cent to $585. Cardano and XRP increased by 4.5 per cent to $1.88 and $1.10, respectively, while Polkadot added 6 per cent to $41.35. The biggest gainer amongst the top 20 cryptocurrencies was Shiba Inu, rising 15 per cent.

German producer prices rose strongly in October, significantly exceeding forecasts. According to the Federal Statistical Office, prices rose by 3.8 per cent compared to the previous month. Economists surveyed by Dow Jones Newswires had expected an increase of only 1.3 per cent. Compared to the previous year, the increase was 18.4 per cent. This is the highest rate since November 1951, when economists had forecast a rise of 15.6 per cent. The main reason for the substantial price increase in October was the price development of energy. Energy prices were on average 48.2 per cent higher than in the same month last year.

Japan‘s cabinet has launched an economic stimulus package worth 55.7 trillion yen (about 430 billion euros) to cushion the impact of the corona crisis. According to the Japanese news agency Kyodo, Prime Minister Fumio Kishida said on Friday that the package should help to steer Japan back on the path of growth. Kishida said he hoped the planned stimulus measures would boost the gross domestic product of the third-largest economy by 5.6 per cent. To finance the new package, the government is expected to submit a supplementary budget to parliament before the end of the year. Due to lower exports and weak demand from private households, Japan’s economy shrank more significantly in the third quarter than economists had expected.