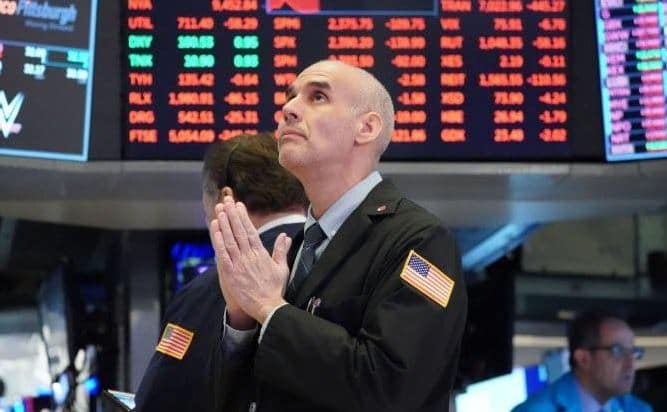 Risk on – Risk off

The fact that today the so-called covenant of witches was in force was almost completely forgotten in the current exceptional situation. As a result, futures contracts and options on the major stock indexes expired this Friday on the derivatives exchanges. The expiration of these futures contracts could, therefore, explain the slight recovery on some stock markets. Nevertheless, some investors were already rejoicing that this was now the beginning of a strong comeback in the market.

However, it is premature to give the all-clear here. After all, a plateau in new infections, for example in Europe and the USA, is still a long way off, and neither is a drug or vaccine in sight. Without a light at the end of the corona tunnel, the situation will remain tense and the markets highly volatile. Further severe setbacks in the market are therefore very realistic.

The US stock markets slipped significantly in late Friday trading. The recovery on Wall Street that began on Thursday collapsed on Friday after an initial continuation. In what was once again a very volatile trading session on the big expiration date, the early gains already seemed fragile and were finally lost when news ran across the tickers that the Governor of New York had called on workers to stay at home from now on if possible.

The various measures taken by the US Federal Reserve and other central banks to combat the economic consequences of the corona pandemic thus only temporarily provided some confidence. Among other things, the Federal Reserve announced additional bond purchases on Thursday and guaranteed several countries access to dollar liquidity.

The stock markets in Asia stabilised at the end of the week. Extensive measures taken by several governments and central banks around the world dampened concerns about the economic consequences of the corona crisis. The stock exchanges in mainland China as well as Hong Kong recorded price losses. The CSI, which comprises the 300 most important shares on the Chinese mainland stock exchanges, rose by around 1 per cent. In Hong Kong, the most recent price markups were significantly higher at around 3.5 per cent at Hang Seng. In Japan, trading was suspended due to a public holiday.

The European stock markets also continued to stabilise on Friday. The EuroSTOXX 50 had started higher and continued to rise sharply in the further course of trading. In the end, the index closed 3.85 per cent stronger at 2,548.50 points.

Once again, the leading German index closed at 8,928 points, a daily gain of 3.70 per cent. Thus, the index defended its positive daily trend for the time being, despite Wall Street giving way today, even though the peak level of almost 9,200 points could not be maintained in early trading. In a week-on-week comparison, the index thus lost around 3.3 per cent. The MDax of mid-sized stocks rose on Friday by 5.18 per cent to 19,521.15 points.

The head of France’s central bank, Francois Villeroy de Galhau, said he was convinced that the comprehensive crisis measures of the European Central Bank (ECB) would take effect. And indeed, the billions in economic aid from central banks and governments now appear to be gradually encouraging investors. But it could just as well be that there are currently bargain hunters on the move who only buy for a short time and then quickly sell again.

The interim recovery of the euro is over again, and the common currency is quoted against the dollar in late trading at 1.0658 dollars. The Greenback expanded its gains after the central banks’ liquidity decisions in the afternoon. The European Central Bank (ECB) set the reference rate at 1.0707 (Thursday: 1.0801) US dollars.

After a significant recovery on the previous day, oil prices came under pressure again on Friday. The emergency measures taken by leading central banks and governments had no lasting effect on the price development. In the afternoon, a barrel (159 litres) of North Sea Brent crude for delivery in May cost $27.81. That was 65 cents less than the previous day. The price of a barrel of American WTI fell by USD 1.18 to $24.73.

The gold price was able to stabilise somewhat again today, Friday. The price for the troy ounce is now back to a level of $1,500 – a daily increase of over 2 per cent.

Cryptocurrencies got under pressure once again, with Bitcoin losing over 10 per cent to $6,000. Ethereum recorded even heavier losses of more than 12 per cent and is currently trading at $129. XRP decreased in value as well. The third-largest digital asset by market capitalisation fell by 9 per cent to $0.1550.

To avert the worst economic consequences of the coronavirus crisis, the government in London wants to take over salary payments for companies and associations in distress. This was announced on Friday by British Finance Minister Rishi Sunak. Employers of all types and sizes could apply for subsidies from an unlimited fund, Sunak said at a press conference with UK Prime Minister Boris Johnson. Up to 80 per cent of salaries and a maximum of 2,500 pounds (the equivalent of about 2740 euros) per month will be paid per employee who is unable to work. In addition, the government will not demand any sales tax payments until the end of June. “Please look very carefully at this support before they lay people off,” Sunak said.

The solar and wind farm operator Encavis sees hardly any negative effects from the coronavirus for the current year. By 2020, Encavis aims to increase sales to more than 280 million euros, with adjusted earnings before interest, taxes, depreciation and amortisation (Ebitda) expected to exceed 220 million euros. In 2019, Encavis posted revenues of 273.8 million euros and adjusted EBITDA of 217.6 million euros. The dividend is expected to increase from 24 cents to 26 cents. The Annual General Meeting will postpone Encavis from mid-May to an unknown date. In over-the-counter trading, Encavis shares rose 13 per cent.

Recession in EU could be comparable to 2009

According to the EU Commission, the downturn in the current year could be much worse than previously assumed.

The decline in economic output could well be as severe as in the acute crisis in 2009, according to a Commission communication of Friday. The prerequisite is that the corona crisis lasts until June or beyond.

A week ago, the Commission had only assumed that the gross domestic product would shrink by 1 per cent. Since then, however, the situation has continued to deteriorate, the communication says. In 2009, the economy shrank by 4.3 per cent in the EU and by 4.5 per cent in the eurozone.