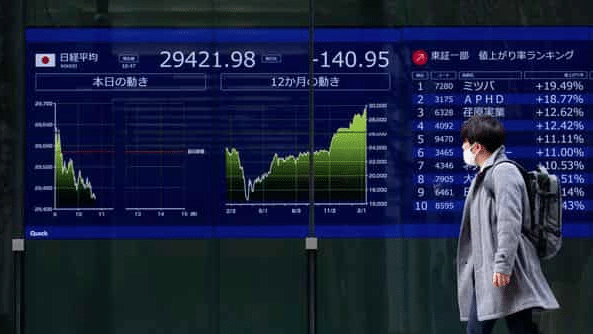 After the previous day’s sell-off, hopes for a counter-movement on the international stock markets were not fulfilled today. Interest rate fears continued to cause a lot of nervousness. The fact that numerous CEOs and Fed members have sold shares worth several billion US dollars in recent days and weeks is also contributing to the current sell-off.

The looming change in the interest rate regime of the US Federal Reserve is currently the dominant topic on the stock market. Investors are worried that the Fed might put on the brakes too much and stall the upswing. In the meantime, many market participants are even expecting the first hike of 50 basis points in March after the latest high inflation data. In addition, the geostrategic situation in Ukraine has become more acute.

Investors in the USA sold off significantly on Friday. The Dow Jones was able to gain at times on the last trading day but fell back considerably at the close of trading, losing 1.30 per cent to 34,265.37 points. The tech stocks index NASDAQ Composite was significantly weaker, slumping 2.72 per cent to 13,768.92 points.

The downward slide of the past few days thus continued on Wall Street on Friday. This marked the end of a deep red week on the stock market, marked by interest rate fears and geopolitical tensions. As on the previous days, slight attempts at recovery were not sustained, and the indices again closed at a daily low. In trading, reference was also made to the bear market in Netflix.

The closer the US Federal Reserve meeting gets next week, the more nervousness increases, it was said in trading. The mood remained depressed by uncertainty about the pace and extent of the upcoming interest rate hikes. Investors were hoping for clues from the upcoming Fed meeting. But trading also pointed to growing tensions between Russia and the West over the Ukraine conflict, driving investors out of risky assets such as equities.

Citigroup, meanwhile, pointed to the significant drop in upward revisions to corporate earnings expectations in January. “The peak in revision momentum could be a catalyst for market weakness,” the analysts judged.

In the technology sector, Netflix slumped 21.8 per cent – weighed down by a disappointing new customer growth forecast. Some of the fourth-quarter figures were better than expected, but they were of no interest.

Most of the stock exchanges in the Far East also posted red signs. In Japan, the Nikkei closed with a loss of 0.90 per cent at 27,522.26 points. The stronger yen had a negative impact, as it represents a competitive disadvantage for shares from the export sector. On the Chinese mainland, the Shanghai Composite fell 0.91 per cent to 3,522.57 points by the close of trading, while Hong Kong’s leading market index Hang Seng rose a minimal 0.05 per cent to 24,965.55 units.

The stock exchanges thus followed the once again very weak specifications from Wall Street, where it had gone down for the third day in a row. Continuing interest rate fears concerning the US Federal Reserve had again depressed investor sentiment.

The European stock markets were clearly in the red on Friday. The EuroSTOXX 50 left the trading session 1.63 per cent lower at 4,229.56 points.

The DAX opened weaker and was then also deep in red territory. At times it even broke through the 15,500-point mark. In the end, it closed with a minus of 1.94 per cent at 15,603.88 points. The TecDAX significantly extended its initial loss after already losing ground at the start. It ultimately went into the weekend 2.4 per cent lower at 3,504.31 points.

Rising inflation and the reaction of the central banks to it remained the dominant topic on the stock exchange floor. This was compounded by fears of a Russian invasion of Ukraine.

In addition, options on indices and individual shares expired on the so-called small expiration date. On these dates, share prices usually fluctuate more strongly than usual.

The euro recovered to 1.1344 dollars in US foreign exchange trading. The Japanese yen, as well as the Swiss franc, also recorded gains. Traders cited the significantly gloomier stock market sentiment as to why these two currencies were targeted as havens of stability, as they often are in uncertain times.

The recent surge in oil prices was dampened today. The price of a barrel of North Sea Brent is down a good one per cent, while US light oil WTI is falling more sharply by 2.2 per cent. The price slide was triggered by a general deterioration in sentiment, which was also reflected in a significant drop in the stock markets.

The price remained virtually unchanged at currently $1,835 per troy ounce.

Similar to the stock market, cryptocurrencies continue to slide as well. Bitcoin dropped below $35,000 per coin at times, while Ethereum slumped to $2,300. Almost all top tier coins and tokens saw heavy losses of around 15 per cent.

Public debt in the eurozone fell in the third quarter of 2021. The public debt mountain, measured in terms of gross domestic product (GDP), fell to 97.7 from 98.3 per cent in the previous quarter, as reported by the statistics authority Eurostat. The debt mountain climbed to 11.73 from 11.61 trillion euros in absolute terms. In both the eurozone and the EU, the government debt-to-GDP ratio fell at the end of the third quarter due to the recovery in GDP. In the EU-27, the government debt-to-GDP ratio fell to 90.1 from 90.9 per cent, corresponding to 12.74 trillion euros from 12.62 trillion euros.

Consumer confidence in the eurozone fell slightly in January. The index calculated by the EU Commission decreased by 0.1 to minus 8.5 points. Economists surveyed by Dow Jones Newswires had forecast a reading of minus 9.0. For the EU-27, the value fell by 0.4 points to minus 10.0.