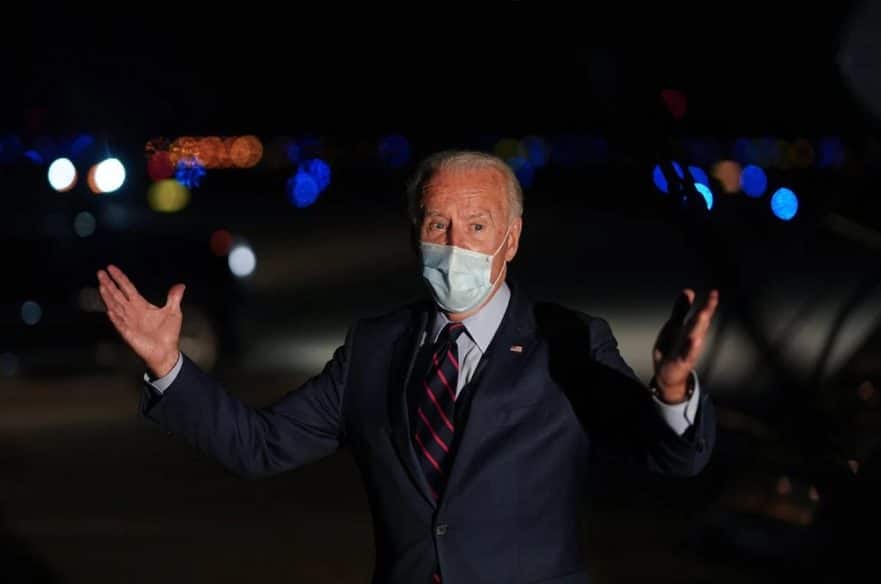 Did the stock markets only take a breather today or is this the end of a “to good to be true (or real)” rally?

After repeatedly hitting new record highs, Wall Street and most other world markets ran out of steam on Friday. But according to many experts, this is likely to be only a brief hiatus.

At the moment, the stock markets’ direction seems to be determined by one man: Joe Biden. The prospect of a nearly two trillion dollar economic stimulus package under the new US president drove the stock markets to new highs this week. Investors are currently riding the “blue wave”, referring to the “blue” Democrats who can now rule the US.

However, other investors fear that the tightened Corona restrictions will further stall the economic engine. Reuters learned from an insider the federal government in Germany is expected to lower its growth expectation for the current year to 3.0 per cent. Previously, the government had expected growth of 4.4 per cent.

Already, the lockdowns are slowing the economy in many parts of the world. The European purchasing managers’ index fell below the growth threshold of 50 points in January. Economists expect a recession in the Eurozone in the winter half-year.

Traders on Wall Street didn’t move in a clear trend on Friday. The Dow Jones went in the red throughout the session, falling 0.57 per cent to 30,996.98 points at the close of trading. The NASDAQ Composite hovered around the previous day’s close and posted a slight daily gain of 0.09 per cent at 13,543.06 points.

Heavy losses following the financial reports of tech giants Intel and IBM stalled Wall Street’s record chase ahead of the weekend. Both shares came under heavy selling pressure on Friday.

Already the day before, the Dow and the S&P 500 had not been able to hold initial gains until the closing bell. Slowly but surely, the euphoria over Joe Biden’s inauguration gives way to renewed worries about corona, vaccines and the economic impact. The new US president’s plans for another big stimulus package to fight the pandemic’s effects are also meeting with resistance in the Senate. Biden’s Democrats have a razor-thin majority there thanks to the vote of Vice President Kamala Harris. For many measures, however, Biden is dependent on dissenters from the Republican ranks.

The Asian stock exchanges posted losses on the last trading day of the week.

The Japanese benchmark index Nikkei closed with a loss of 0.44 per cent at 28,631.45 points. Caution was caused by the reporting season starting next week. China also saw a downward trend. On the Chinese mainland, the Shanghai Composite lost 0.4 per cent to 3,606.75 points by the end of the Asian session, while the Hang Seng fell 1.60 per cent to 29,447.85 index points in the metropolis of Hong Kong.

Many investors acted cautiously before the weekend, which slowed down the Asian stock markets, as did profit-taking.

The European stock exchanges were significantly weaker on Friday. The EuroSTOXX 50 started the day with a loss and extended this further in the course of trading. At the end of today’s trading session, it was down 0.53 per cent at 3,599.06 points.

The vaccination campaign in Europe – and especially in Germany – is making slow progress. In the meantime, the EU is considering restricting fundamental rights, such as the freedom to travel, for un-vaccinated people. This dampened investor sentiment.

On the corporate side, the quarterly figures of Siemens and Volkswagen were in focus.

The euro was stable in late US foreign exchange trading on Friday. The single currency last traded at 1.2171 US dollars. In early European currency trading, the euro had weakened slightly to 1.2151 dollars. The British pound was under pressure. The market pointed to weak economic data as the reason. The Markit Purchasing Managers’ Index for the UK fell sharply at the start of the year, especially in the service sector.

The measures taken by leading industrialised countries to curb the Corona pandemic have come back into focus on the oil market. Due to the expansion of restrictions, forecasts for economic growth in 2021 are currently being lowered, in some cases significantly. As a result, oil prices fell on Friday. Brent crude fell by 55 cents to 55.55 US dollars per barrel. West Texas Intermediate (WTI) oil also fell by 56 cents to 52.57 dollars. In the course of trading, oil prices were under even greater pressure at times.

In the wake of a strengthening greenback, the gold price fell significantly as well. The price for a troy ounce declined by $15 to $1,855.

Cryptocurrencies also remained under pressure the second day in a row. Bitcoin is currently hovering around $32,000 per coin, while Ethereum is trading at $1,225 and XRP at $0.27.

Stricter measures to contain the corona pandemic again put a damper on the German economy at the beginning of the year. According to the first release of data for this month, IHS Markit’s composite index of private-sector production – industry and services combined – fell to 50.8 points in January from 52.0 points in the previous month.

With the rising infection figures and the new restrictions, the eurozone economy’s downward slide also intensified again in January. The composite index for production in the private sector – industry and services combined – fell to 47.5 points from 49.1 in the previous month, the IHS Markit Institute reported in its first release. Economists had predicted a decline to 48.0 points.

Activity in the US economy accelerated in January. IHS Markit’s composite index of production in the private sector – industry and services combined – rose to 58.0 from 55.3 points in the previous month. The manufacturing purchasing managers’ index rose to 59.1 from 57.1 in the last month. Economists had predicted a reading of 57.0. The index for the service sector rose to 57.5 from 54.8 points while analysts had forecast for 53.5.

CEO Joe Kaeser said goodbye after presenting strong figures. Above all, the digital division contributed to this, traders said. Against this background, Siemens shares appeared to be too cheaply valued. Goldman Sachs raised its target price to 145 euros. Jefferies said that profitability in the Digital Industries segment had been impressively high. Higher targets for the industrial group for the entire fiscal year are now “very realistic”. The Siemens share rose by over 7 per cent in the Dax.