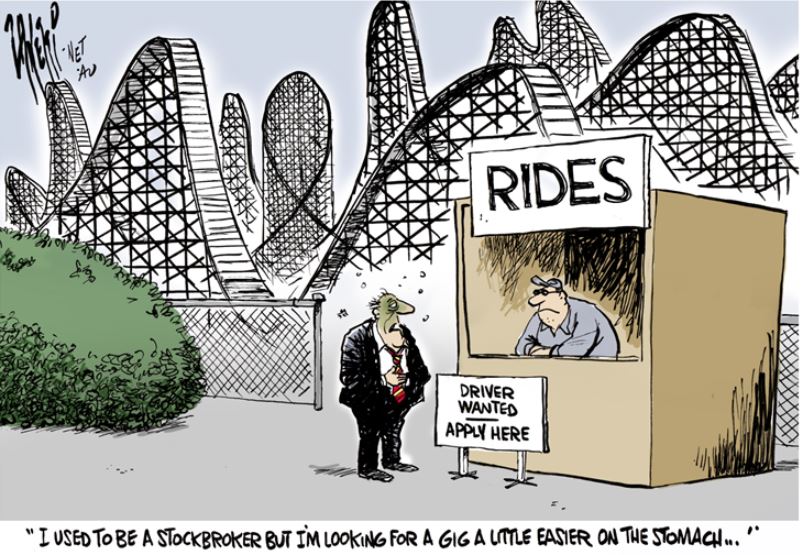 It’s been a wild Friday in the markets – especially the German leading index Dax 30 as well as the Cable.

Interestingly but ultimately randomly showing similar moves on Friday, both financial instruments were taken on a rollercoaster ride by rising sharply just to come down as fast later on.

Initially, investors in world markets were still hopeful that China would be able to prevent the spread of the virus, especially since the country is countering this with extensive measures such as the closure of several megacities. The celebrations for the beginning of the New Year were also partly cancelled. Also, the World Health Organization (WHO) has not declared an international health emergency for the time being. In addition, Gilead Sciences is to consider its anti-ebola drug Remdesivir suitable in the fight against the new virus, according to a report.

On Friday, however, it became known that the coronavirus had been detected in another patient in the USA. The person in question had entered the USA in mid-January from the Chinese city of Wuhan, where the virus first appeared. This gave new impetus to fears that the Chinese government’s travel restrictions would hamper tourism and trade, thus slowing economic growth.

Fear of a pandemic weighed on the US stock markets on Friday.

The Dow Jones initially opened in a friendly manner, but by the end of trading had fallen by 0.58 per cent to 28,989.73 points. The NASDAQ Composite showed a similar development and lost 0.93 per cent to 9,314.91 points.

The largest stock exchanges in Asia were only able to recover slightly on Friday from the harsh losses of the previous day.

In Tokyo, the Nikkei closed 0.13 per cent stronger at 23,827.18 index points. There was no trading on the stock exchanges in mainland China because the New Year celebrations will be held there from 26 to 30 January inclusive. Most recently, the Shanghai Composite had fallen by 2.75 per cent to 2,976.53 points on Thursday. In Hong Kong, there was only shortened trading on Friday. The Hang Seng rose by 0.15 per cent to 27,949.64 index points.

European stock markets showed strong gains on Friday. The EuroSTOXX 50 rose significantly at the beginning, after starting the morning with a small plus. However, it ended the last trading day of the week only slightly stronger at 3,755 index units.

The Dax 30 also rose sharply at the beginning, reaching 13,576 points, but had to give up some of its gains in US trading and finally finished before the weekend with 13,517 points.

The euro stabilized somewhat on Friday in late US currency trading. Most recently, the common currency was quoted at 1.1033 US dollars. In late European currency trading, the euro exchange rate had dropped to 1.1020 dollars, the lowest level since the beginning of December. The European Central Bank (ECB) had previously set the reference rate at 1.1035 (Thursday: 1.1091) US dollars. The dollar had thus cost 0.9062 (0.9016) euros.

The British pound came under considerable pressure. Corporate sentiment in the UK had surprisingly brightened considerably at the beginning of the year. According to the data, the pound briefly gained noticeably and rose against the dollar to a daily high of $1.3173. However, the pound wholly and quickly gave back its gains and dropped to a daily low of $1.3057.

In the afternoon, oil prices increased their losses. The day before, the danger of weaker growth in China due to the spread of the coronavirus had already put greater pressure on commodity prices. Currently, the US light oil variety WTI is down 1.9 per cent, and the North Sea variety Brent is also losing ground.

The cryptocurrencies market remained widely unchanged on Friday with most major currencies in consolidation. A Bitcoin currently costs approximately $8,400.

The chip manufacturer Intel implemented and earned more than expected in the fourth quarter. This was due to increased demand for chips for data centres and PCs.

In the final quarter, Intel earned USD 6.91 billion below the line, compared with USD 5.2 billion in the same period of the previous year. Adjusted earnings per share were $1.52 compared with $1.28 a year earlier. Analysts had expected $1.25 in the consensus.

Sales increased by 8 per cent to 20.21 billion dollars. Here, the analysts had forecast 19.23 billion in consensus.

Intel shares climbed to their highest level in almost 20 years on Friday after quarterly figures. In trading on the Nasdaq, the semiconductor manufacturer’s shares finally rose by 8.13 per cent to 68.47 US dollars. On the high, they climbed to 69.29 US dollars. The last time they were valued at this high was in 2000. The market value is, thus, around 284 billion US dollars.

Nestlé is increasingly focusing on plant-based substitutes for meat and dairy products. To this end, the Swiss food giant is working together with the Canadian companies Burcon and Merit, Nestlé announced on Friday. Burcon and Merit are active in the development and production of plant proteins that will be used in Nestlé products in the future. Nestlé already offers plant-based hamburgers, sausages or minced meat.

British Prime Minister Boris Johnson signed the agreement on his country’s withdrawal from the EU on Friday. This was announced by the government seat Downing Street in the evening. Earlier, EU Council President Charles Michel and EU Commission President Ursula von der Leyen had already signed the Brexit deal. The document was then brought to London.

“The signing of the withdrawal agreement is a fantastic moment that finally implements the outcome of the 2016 referendum and ends far too many years of strife and division,” Johnson said in a statement.

All that is missing now is the approval of the European Parliament and the 27 remaining member states, but they are considered absolute. Britain will leave the international community at 24.00 on 31 January.

There is a transitional period until the end of the year, during which almost everything will remain as it is. During this period, London and Brussels want to reach an agreement on future relations.