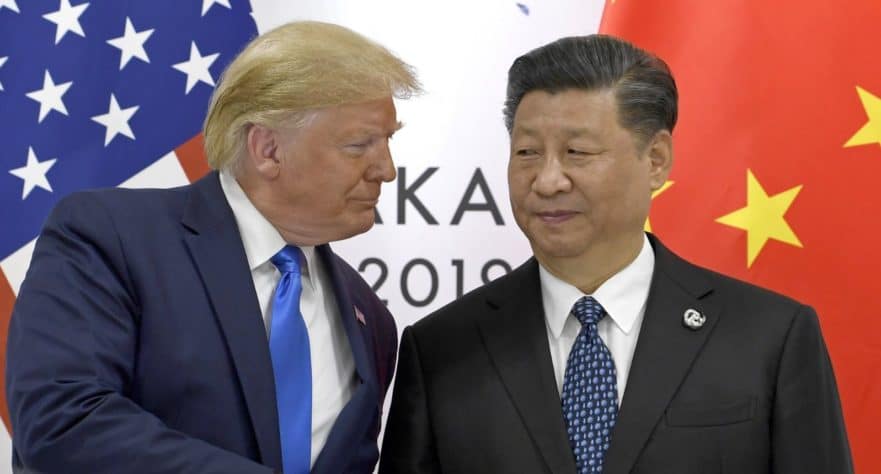 All good after all?

On Wall Street, hopeful signals in the trade dispute are causing price fanaticism. After some initial hesitation, the Dow Jones index has turned positive. At times, the leading US index climbed back above the 27,000 mark.

Vice President Mike Pence accused China of large-scale theft of trade secrets and other unfair trading practices. At the same time, however, he was confident that the two largest economies could still succeed in concluding a comprehensive and fair trade agreement based on mutual respect. The US did not want to exclude Beijing from the global economic system, Pence stressed in a speech on the US government’s China policy.

The Japanese Nikkei 225 index reached a new high for the year, but overall development was rather sluggish. At the close of trading, the stock market barometer was still up 0.2 per cent at 22,800 points. The CSI 300, with the 300 most important shares on the Chinese mainland stock exchanges, has recently almost stagnated.

The EuroSTOXX 50 registered small gains this Friday and ended the trading day at 3,624 points, a plus of 0.09%.

The leading German index Dax 30 has gained around two per cent in the past week – the third week in a row with profits!

On Friday, local investors were infected by the buying mood on Wall Street during the last hour of trading, so that the Dax entered the weekend near its daily high of 12,984 points. This was 0.17 per cent or 22.41 points more than the previous day. Since the beginning of the year, the share price has risen sharply by 22 per cent.

This reflects hopes that the American-Chinese trade conflict will ease. Trump’s trade advisor, Peter Navarro, told Fox News on Friday that there had been “excellent talks” in the morning. Further talks had been agreed. “There is optimism. The aim is still to conclude a partial agreement, “Phase One”, in November. Many investors are also hoping for rising corporate profits again.

On Friday, market experts spoke of a “classic consolidation day” on the German stock market. CMC Markets’ experts saw the fact that the 12,800-point mark was never threatened at any point in the day as “a strong signal that the rally can get going again at any time from a technical point of view”.

On Friday, the euro profited only briefly from surprisingly robust economic data from Germany. At the close of the trading day, the common currency was sitting at1.1085 dollars, slightly less than in the morning. The European Central Bank (ECB) set the reference price at 1.1107 (Thursday: 1.1128) dollars.

Market participants explained the euro losses mainly with the slightly stronger dollar. German economic data provided only temporary support for the euro. The Ifo business climate, Germany’s most important economic barometer, stabilized at a low level in October. ING chief economist Carsten Brzeski spoke of relief, but there could be no talk of a trend reversal. The export-oriented German economy has been suffering for some time from the weak global economy and the trade conflict between the USA and China.

The gold price is trending slightly better at around 1,504 dollars per troy ounce, while oil prices fell once again.

After being hit with significant losses on Thursday, cryptocurrencies have recovered this Friday slightly. One Bitcoin currently costs approximately $7,600, one Ethereum $170 and one XRP $0.27.

After a weak summer quarter, the world’s leading brewery AB Inbev predicts weaker growth for the year as a whole, sending its shares on a downward trend. The shares are falling by more than ten per cent, the biggest daily loss in a year. The manufacturer of Budweiser, Corona and Stella Artois felt the effects of the global economic downturn in the three months to the end of September and now expects only “moderate” profit growth.

The French carmaker’s sales fell in the third quarter due in part to lower demand for diesel vehicles. Revenues fell by three per cent to 11.296 billion euros. Sales shrank by 4.4 per cent. Lower production by Renault partners Nissan and Daimler were also responsible for the decline. Last week, the company shocked the markets with a profit warning.

Amazon earned less in the third quarter. High spending reduced net income by nearly 28 per cent year on year to $2.1 billion. The result was thus well below Wall Street’s expectations, with the share falling by almost seven per cent off-market in an initial reaction. Amazon was able to exceed its turnover forecasts. Here there was an increase of 24 per cent to 70 billion dollars. However, the outlook for the Christmas business was disappointing – Amazon forecast revenues of between 80 billion and 86.5 billion dollars for the final quarter.

Tesla has overtaken General Motors (GM) as the most valuable US carmaker on the stock exchange. On Thursday, the shares of the electric car company – driven by better-than-expected quarterly figures – left the US market with a price gain of just under 18 per cent. Tesla’s market capitalization catapulted to 53.7 billion dollars. GM last brought it to 51.1 billion dollars.

In the coming decades, Daimler plans to convert its commercial vehicles to emission-free drives in addition to Mercedes passenger cars. “It is our ambition that by 2039 all our new vehicles in Europe should be “tank-to-wheel” – i.e. in operation – CO2-neutral,” announced Martin Daum, head of Daimler Trucks & Buses.

By 2022, the company also plans to offer battery-powered production vehicles in Japan, the USA and Europe. The ultimate goal is CO2-neutral transport on the roads by 2050, the commercial vehicle manufacturer announced. This goal is only two model cycles away.

By 2022, vehicles powered by hydrogen should also be ready for series production. The company is convinced that both technologies, electric and hydrogen drive, exist side by side and will complement each other well.