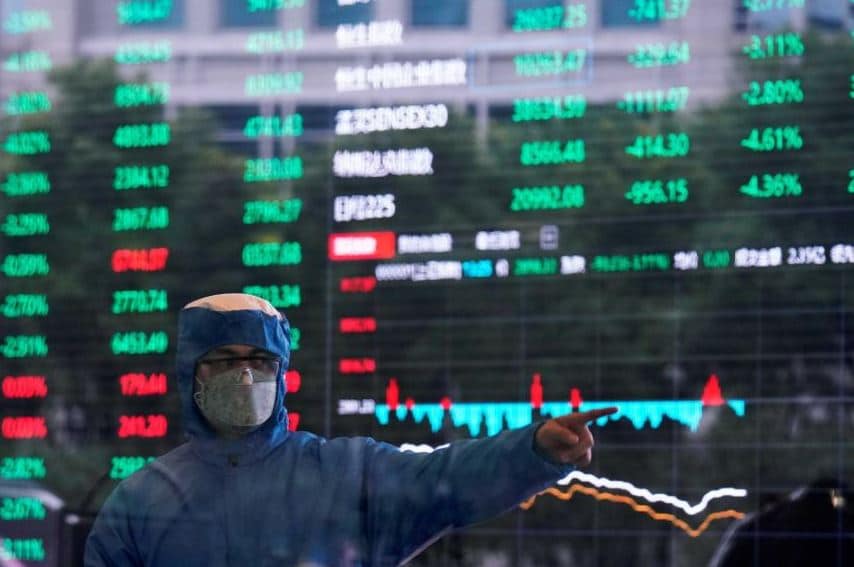 According to experts, the market is torn between renewed corona worries and economic data that at least point to a moderate economic recovery.

However, the record number of infections in the US made investors very nervous today. In the past few days, the number of new corona infections in the United States has skyrocketed. Johns Hopkins University reported around 40,000 new cases on Thursday, and the prospect of potential new, at least regional lockdowns could put the brakes on a V-shaped recovery. For example, the governor of Texas ordered bars to be closed due to corona hazards. The bet on a rapid economic recovery plus the stimuli from the central banks and governments had recently been the most powerful driver of the stock market recovery.

The banking sector, which came under pressure due to the bank stress test, also became a burdening factor. Current economic data did not prove to be supportive either: consumer spending did not rise as sharply as expected in May, and the consumer climate determined by the University of Michigan was also disappointing.

In addition to all this, investors often rearrange their portfolio and close existing contracts at the end of the month, which weighed on the markets today.

After an initially positive start, Wall Street fell sharply at the end of the weekend.

The latest US economic data was mixed. Although consumer spending recovered strongly in May, it did not recover quite as strong as expected. The consumer climate for June surveyed by the University of Michigan was also somewhat disappointing.

However, the mood was also dampened by a bill passed by the US Senate which provides for sanctions against Chinese officials who seek to undermine Hong Kong’s partial autonomy. The sanctions are also aimed at banks that do business with them.

The Far East stock exchanges did not show a uniform direction on Friday.

In Tokyo, the Nikkei gained 1.2 per cent to 22,512 index points after the previous day’s minus on Friday. On the Chinese mainland, there was still no trading on Friday due to a public holiday. The Shanghai Composite was 0.30 per cent higher at 2,979.55 points at the end of trading on Wednesday. In metropolitan Hong Kong, the markets had some catching up to do after the holiday break of the previous day. As a result, the Hang Seng dropped 0.93 per cent to 24,549.99 points.

European markets showed losses on the last trading day of the week. The EuroSTOXX 50 closed 0.46 per cent lower at 3,204 points. Thus the European stock exchanges followed their US counterparts into the red.

On the German stock market, the week ended as it had begun: with price losses. The leading German index closed 0.7 per cent lower at 12,089 points. On the weekly chart, the minus was almost 2 per cent.

Two Dax 30 companies remained in focus today: The government rescue package for Lufthansa is confirmed, thus averting the airline’s insolvency. Meanwhile, Wirecard is facing further problems: Visa and MasterCard are considering terminating their business relations with the Group, and Wirecard shares are also being kicked out of the Stoxx Europe 600. The share price dropped dramatically once again and marked new lows of 1,28 Euros.

In the opinion of ECB boss Christine Lagarde, the eurozone should probably have the low point of the corona crisis behind it. However, there are still many admonishing voices in the market. For example, the positive sentiment could quickly evaporate if, for example, there are renewed lockdowns. Many experts also doubt the belief that unemployment would soon decrease again.

On the foreign exchange market, the euro has gone up and down since the start of stock trading on Wall Street. At times it fell below the $1.12 mark and then recovered to $1.1238. The European Central Bank had set the reference rate during the trading session in Frankfurt at 1.1213 (Thursday: 1.1200) dollars.

In the commodities market, oil prices fell on Friday given the worsening corona crisis in the USA. Because of the dramatic development, some US states do not plan to implement announced easing measures for the time being. This could hamper the economic recovery in the USA and thus dampen demand for crude oil. North Sea Brent was traded at USD 40.48 this evening, 55 cents less than the day before. The West Texas Intermediate (WTI) price fell by 77 cents to $37.91 a barrel.

The precious metal gold was one of the winners today. On the daily chart, the troy ounce of gold gained 0.43 per cent to $1,771.

On the cryptocurrency market, prices of the top three digital assets did not change in synch this Friday. Bitcoin and Ethereum ultimately lost 1.3 per cent to $9,120 and 1.26 per cent to $230 respectively. XRP remained stable and almost unchanged at $0.1840.

According to a news report in the “Handelsblatt”, the Austrian Financial Market Authority (FMA) is investigating the management of the chip and sensor manufacturer AMS. The report concerns share transactions in the current takeover of the lighting company Osram. “We will, of course, follow up all indications of violations of the law and investigate the facts of the case,” a spokesman for the Austrian Financial Market Authority is quoted as saying.

According to information from judicial circles, the investigations had already started six months ago. It was about the clarification of significant share purchases and sales by the AMS management. AMS rejected any accusations in a statement issued on Thursday evening. It was not aware of any investigations.

Closed stores, due to the current situation, have put the world’s largest sports goods manufacturer Nike deep into the red.

In the past fiscal quarter (to the end of May), the company posted a net loss of $790 million (EUR 704 million), according to the Adidas rival on Thursday after the US stock market closed. In the same period last year, Nike had earned $989 million.

The social networks Facebook and Twitter are coming under increasing pressure in connection with the debate on racism in the USA. Now the consumer goods manufacturer Unilever in the USA no longer wants to run advertising on both platforms – at least for the rest of the year. Luis Di Como, who is responsible for the media worldwide at Unilever, demanded in an interview that more should be done against hate comments. The list of companies boycotting Facebook ranges from Verizon to Eddie Bauer. The shares of Twitter and Facebook lost about 7 per cent.