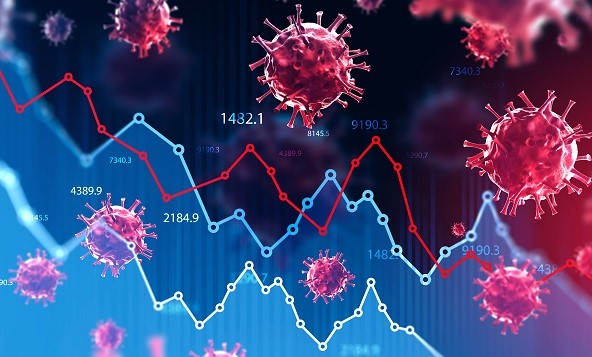 The Next Corona Slump

On Black Friday of all days, stock markets worldwide were caught up in renewed fears about the corona crisis and faltered badly.

The reason for today’s sharp decline was that it was reported that a new, possibly dangerous, Corona variant with the designation B.1.1.529 has emerged in southern Africa. Meanwhile, a first case has also been documented in Belgium. According to the WHO, the allegedly new variant, which the WHO has listed for more than a year, will in future be named after the Greek letter Omikron.

The situation was exacerbated by yesterday’s Thanksgiving holiday, which many Americans used for a long weekend. Buyers were sitting at home celebrating, and high supply met low demand.

Bunds, on the other hand, benefited from the new uncertainty. The yield on ten-year Bunds in Germany fell sharply to minus 0.32 per cent, and bond prices rose accordingly. Yesterday, the yield had still been minus 0.25 per cent.

Sell-offs did not stop on Wall Street today. The Dow Jones fell sharply at the start of trading and continued to expand its losses. In the end, the stock market barometer showed a minus of 2.53 per cent to 34,899.34 points. The NASDAQ Composite tech index also continued to slide south. It ended the shortened session 2.23 per cent lower at 15,491.66 points.

The fear of a new corona wave rattled the US markets before the weekend. Already in Asia and Europe, renewed concerns had caused large declines, especially as it was not clear whether the currently available vaccines would also be effective against the new variant as they are believed to have to other variants. Due to yesterday’s Thanksgiving holiday, trading was also shortened on Friday.

The shares of large retail groups were under heavy pressure. The cash registers were supposed to ring because of the discount battle on “Black Friday”, but today’s fear caused the shares of department stores Walmart and Target to plummet.

The stock markets in Asia moved downwards on Friday.

News of the spread of a new and potentially dangerous coronavirus variant in southern Africa put pressure on the stock markets. Oil prices also staggered. In contrast, investments considered “safe havens” such as bonds, the Japanese yen and the US dollar were sought after.

The European stock exchanges slumped on Friday. At the start of trading, the leading European Index EuroSTOXX 50 was in deep red. It also maintained its negative tendency in the day, ultimately entering the weekend 4.7 per cent lower at 4,089.58 points.

The German stock market also fell sharply on Friday after attempts to stabilise over the past two days. The DAX 40 ultimately slumped 4.15 per cent to 15,257.03 points, while the TecDAX fell slightly less and entered the weekend 1.3 per cent lower at 3,821.83 points.

Growing corona concerns also dominated events on the foreign exchange market. In the afternoon, the common European currency was trading at 1.1310 dollars. That is about one cent more than in the morning.

Heightened pandemic concerns sent oil prices on a downward slide on Friday. Market observers pointed to the high level of uncertainty due to a new and possibly more dangerous variant of the coronavirus. Both North Sea Brent and US crude oil fell by more than ten per cent and dropped to two-month lows. Most recently, a barrel of North Sea Brent cost $73.38, down $8.84 from the previous day. The barrel price of WTI light oil even fell by 9.48 dollars to 68.86 dollars.

The sell-off on the stock markets did not stop at cryptocurrencies like Bitcoin and Ethereum. Investors seemingly turned their backs on riskier asset classes and played it safe. Nevertheless, it must be clearly stated that this recent decline in cryptocurrency prices was also accompanied by a technical correction and could therefore be completely independent of today’s slides in other markets.

The ifo Employment Barometer for Germany rose slightly in November to 103.8 points from 103.7 in October. “German firms are looking for staff somewhat more intensively than in the previous month,” the Ifo Institute explained. “Supply problems and the corona wave do not appear to be leaving any noticeable impact on companies’ personnel planning,” it continued.