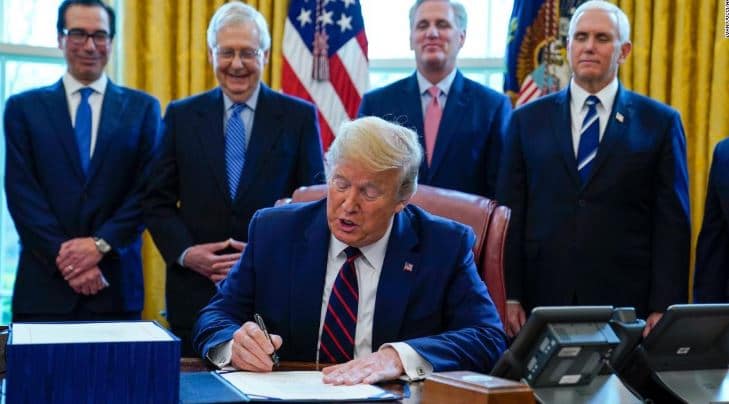 The USA has now overtaken China in terms of corona case numbers, becoming the epicentre of the virus crisis. Before the weekend, many stock exchange traders played it safe and took no risks. After a three-day rally, there was profit-taking and renewed waiting for bargains.

Besides, there was a collapse in US consumer confidence. Meanwhile, because of the coronavirus pandemic, the US Congress has passed a massive economic stimulus package, with which around 2 trillion US dollars should be pumped into the economy. US President Donald Trump has already announced that he will put the package into effect immediately with his signature.

The stock markets thus continue to fluctuate between the frenzy of liquidity and the bitter corona reality.

The US leading index Dow Jones 30 Industrial showed a loss when the starting bell rang and continued to fall afterwards. Its closing level: minus 4.06 per cent at 21,636.78 points. The technology-heavy NASDAQ Composite also moved clearly in the red, having already been trading lower at the opening of trading. It ended the trading day 3.79 per cent lower at 7,502.38 points.

As recently as Thursday, the massive economic stimulus package in the USA to support the economy had given a powerful boost to the US stock markets. And this despite devastating data from the labour market.

In Asia, the stock indices were able to gain before the weekend.

The Asian stock exchanges once again presented a volatile performance on the last trading day of the current week. The rally on Wall Street on the previous day caused a buying mood at times, but prices in some cases fell significantly from their daily highs.

The European stock markets fell sharply before the weekend. The EuroSTOXX 50 was clearly in red territory after opening lower and closed 4.18 per cent lower at 2,728.65 points.

The German stock market also presented itself with significant discounts in Friday trading. The DAX already opened at around minus two per cent and slid deeper into the red as the day progressed. At the end of trading, it lost 3.68 per cent to 9,632.52 points but was still able to post a weekly gain of around 8 per cent. The TecDAX also recorded significant losses. It closed 3.31 per cent lower at 2,506.46 index units.

After the recent recovery, the domestic stock market took a breather: For the Dax 30, the 10,000 point mark remained a high hurdle this week.

On the foreign exchange market, the euro recovered significantly from its daily lows and even broke the 1.11 dollar mark in the evening. At the end of the week, currencies that are considered a safe haven were in demand. The Japanese Yen as well as the Swiss Franc gained against many other currencies. The European Central Bank (ECB) set the reference rate at $1.0977. The British pound initially gave up a small part of its gains against the dollar after it became known that British Prime Minister Boris Johnson had become infected with the coronavirus. He had developed mild symptoms, coughing and fever, Johnson said in a video message. “I work from home. I’m in self-isolation.” After that, the British currency began to appreciate.

Oil prices left the trading week on Friday with significant markdowns. There is still a double burden from the virus crisis and the Saudi-Russian price war. In the evening, a barrel of North Sea Brent currently costs 24.50 US dollars, while the price for a barrel of American WTI fell by 1.37 dollars to 21.23 dollars.

The price of gold hardly moved at all today and remains high at $1,626 an ounce.

Cryptocurrencies remained widely unchanged this Friday with Bitcoin trading at approximately $6,700 and Ethereum at $137. However, the third-largest digital asset by market capitalization, XRP, continued its rise with a further plus of more than 5 per cent to $0.1820.

The Central Bank of Canada has further reduced its monetary policy to contain the economic consequences of the Corona crisis. As the central bank announced on Friday after an unscheduled meeting in Ottawa, its key interest rate has been cut by 0.5 percentage points to 0.25 per cent. An earlier record low is thus set.

Also, the central bank announced that it would start buying short-term corporate bonds (commercial papers) and government bonds. The central bank is thus taking steps similar to those made by other major central banks before it. As a result, the Canadian dollar weakened against the US dollar and the euro.

The US rating agency S&P has lowered its thumb for German car manufacturers due to the economic consequences of the coronavirus crisis. S&P has downgraded the ratings for BMW and Daimler and the outlook for Volkswagen. The virus crisis has triggered a very rapid decline in global demand for cars, which has put carmakers under severe pressure, S&P said.

According to a leading US currency watchdog, the current virus crisis will cause the economy and labour market to collapse. He expects the unemployment rate in the US to rise to values in the low to medium range between 10 and 20 per cent in the spring, said the head of the Fed’s Dallas district, Robert Kaplan, to Bloomberg TV on Friday. By the end of this year, it should then level off at seven to eight per cent. By comparison, the most recent figure was 3.5 per cent, which means practically full employment.