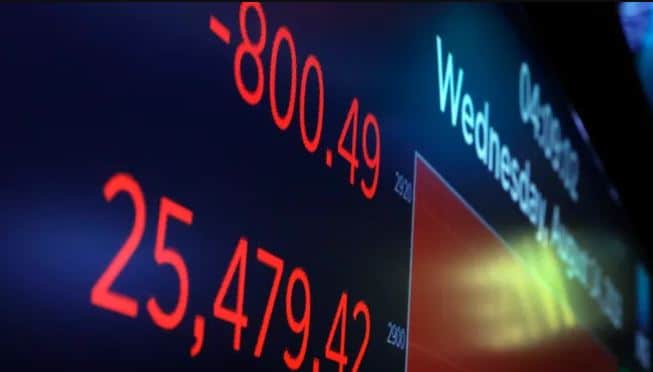 How far down can this go?

What a horror week! Within a few days, the price gains of the past weeks and months were pulverized because the (virus) panic on the stock markets is spreading. On Friday, prices plummeted again massively.

Hopes are now pinning on intervention by the central banks. According to market observers, the Fed could already cut interest rates next month to stimulate the economy. According to the CME Group’s Fed Watch Tool, the probability that the markets will lower the key rate on March 18th is now 100 per cent. At present, 73 per cent of the market participants expect a cut of 25 basis points to 1.25 to 1.5 per cent. Twenty-seven per cent even expect a significant interest rate move of 50 basis points to 1.0 to 1.25 per cent.

In the eurozone, too, interest rate cuts may be imminent due to the coronavirus. Deutsche Bank chief economist David Folkerts-Landau, for example, expects the ECB deposit rate to fall by 0.20 percentage points to minus 0.70 per cent this year. This would mean that financial institutions in the eurozone would have to pay even higher penalty interest rates if they park surplus funds at the central bank overnight.

For the Dow, the decline continued before the weekend.

The NASDAQ Composite index of tech stocks saw a somewhat steeper decline at the start of trading: it lost 3.46 per cent to 8,269.74 points and remained mostly in the red for the rest of the day. Shortly before the closing bell, however, it was able to just about make it back into the plus zone. It ended the day 0.01 per cent higher at 8,567 points. For the US leading index, it was the worst trading week since the financial market crisis in October 2008.

The virus worries also caused the Asian stock markets to drop sharply before the weekend.

On Europe’s stock exchanges, too, the price slide continued on the last trading day of the week.

The EuroSTOXX 50 opened with a smaller minus, but quickly built up the losses and slid deep into the red. It closed 3.66 per cent lower at 3,329.49 points.

The Dax 30 slipped deeper and deeper into the red, at times, trading below the 11,800 point mark. It had already slumped by more than 3.5 per cent at the start. The last time the leading German index had moved below the psychologically important mark of 12,000 points was in October 2019. Overall, Dax investors experienced the blackest week since the beginning of the Greek debt crisis in summer 2011, with the Dax losing 3.86 per cent to 11,890.35 points at the end of trading. The TecDAX also turned deep red and extended its losses. It ended the last trading day of the week 3.18 per cent lighter at 2,848.71 points.

Overall, investors are seemingly and increasingly pricing in profit warnings from companies.

The exchange rate of the euro rose noticeably again on Friday in the course of US trading. After the common currency, the euro, fell to $1.0951 shortly after the start of trading on Wall Street, it cost $1.1023 again about an hour before the close of trading. The European Central Bank (ECB) had set the reference rate in the afternoon at 1.0977 (Thursday: 1.0964) dollars.

Oil prices continued their rapid decline on Friday as part of a general sell-off on the international financial markets due to the coronavirus crisis. For six trading days in a row now, the quotations for US oil and crude oil from the North Sea have been going down. On the weekly chart, the oil market was heading for the most significant losses since 2011. Since the end of last week, crude oil has become massively cheaper on the world market. In approximately one trading week, the quotations for crude oil from the USA slipped by around 19 per cent and for North Sea oil by about 16 per cent. In the late afternoon, a barrel (159 litres) of North Sea Brent was traded for USD 50.45. This was $1.73 less than the previous day. The price of American WTI crude oil fell by 2.43 dollars to 44.66 dollars. Right now, crude oil prices are at their lowest levels since the turn of the year 2018/2019.

The gold price was not able to profit from the renewed risk aversion of investors today. The price of the yellow precious metal’s troy ounce fell by over 3 per cent to $1,589. Investors were cashing in.

Cryptocurrencies followed the path of equities again this Friday and moved further into the red. Overall, it’s been a lousy week for crypto-investors as many major digital assets slipped by 13 to 26 per cent, Litecoin being the worst-performing digital currency with a loss of 26.81 per cent! Bitcoin lost another 1 per cent to now $8,500, while Ethereum slipped to $217 and XRP to just $0.23.

The escalating conflict between Turkey and neighbouring Syria put a heavy strain on the Istanbul stock exchange on Friday. The leading index Bist 30 slipped by almost ten per cent in early trading, and recently it fell by around five per cent. Especially the quotations of Turkish banks came under pressure before the weekend.

After the death of 33 Turkish soldiers in an air raid in Syria, the government in Ankara has banned short sales of all shares on the Istanbul stock exchange.

Meanwhile, the decline of the Turkish currency continues on the currency market. In return, the dollar has risen to a one-and-a-half-year high of 6.2479 lira, and the euro, at 6.8738 lira, is as expensive as it was three quarters of a year ago.

Beyond Meat presented its figures for the fourth quarter of 2019 and the full year on Thursday evening after the US stock market closed. EPS was minus USD 0.01, whereas experts had previously expected earnings per share of USD 0.014. In the previous year, the Group reported negative EPS of USD 1.10. On the sales side, the books show USD 98.5 million – analysts had expected USD 79.4 million. Compared to the same period in 2018 (31.5 million US dollars), this represents a significant jump in sales.

CEO Ethan Brown described the results of the company as “outstanding”. However, investors didn’t receive the news as well: The Beyond Meat share fell 15.54 per cent in Nasdaq trading, closing at $89.65. Beyond Meat was founded in the year 2009 and had a sensational start on the stock market in May 2019. The manufacturer’s burgers now offer various fast food chains.