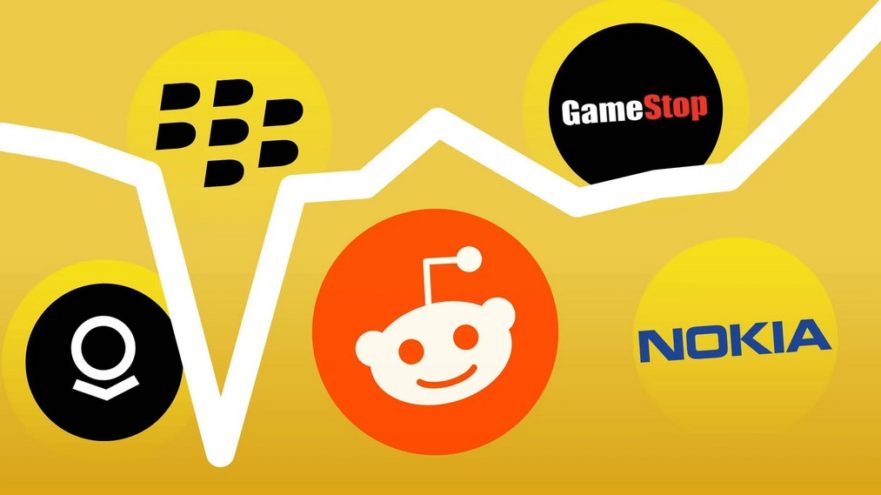 Rise of the Trading Punks

This week’s most dominant theme was, without a doubt, the trading punk story of wallstreetbets and the unprecedented pump of one stock that almost ruined at least one major Wall Street hedge fund.

Some traders speak of the “gambler’s war”, others of the “battle of small savers against long-established professional investors”. For days, an army of small investors, organised via online services like Reddit, has been trying to bring the hedge funds to their knees. The gamblers’ plaything is the GameStop share. The mostly young investors bet on rising prices of the US video game retailer, forcing hedge funds to unwind their bets on a fall in the stock price. “What is happening at GameStop reveals that the stock market has become not a playing field but a battleground,” several market observers also warned deen.

But it’s not all just about winning and losing – it’s even more highlighting the fact that the market always was manipulated and that regulators had turned a blind eye towards the trading and investments space.

A fun side fact is that Reddit is owned by Tencent, a Chinese company that does business with BlackRock, the major player that has already been deemed as “too big to fail”. BlackRock made $2 billion in the GameStop run-up, yet some big boys in the business speak of market manipulation by the small players.

Many small investors’ revolt against the powerful hedge funds could become a severe threat to the financial system. If hedge funds are no longer able to recoup their losses and get into difficulties, there is a threat of considerable distortions on the financial markets. The US Securities and Exchange Commission (SEC) stated on Friday that it closely monitors the events and will ensure investors’ safety and “fair, orderly and safe markets”.

The US stock market fell sharply on Friday. The Dow Jones fell significantly before the weekend and ultimately closed 2.03 per cent weaker at 29,982.62 points. The NASDAQ Composite also lost significant ground, slipping 2 per cent to 13,070.69 points.

Before the weekend, many investors took profits to be on the safe side. Concerns about the ongoing pandemic with the new virus mutations and shortages of vaccines made forecasts about a difficult recovery of the global economy, market participants said.

On the corporate side, investors focused on Atlassian, Eli Lilly, Colgate-Palmolive, and Honeywell, with figures for the past quarter.

In Asia, the most important indices continued their previous day’s losses at the end of the week.

Rumours of a possible credit and liquidity crunch in China and US GDP that missed expectations weighed. Traders also said risk appetite had been low ahead of the weekend. The fall in US equity futures is fuelling doubts among investors in Asia about the sustainability of the US’s gains.

The European stock exchanges presented themselves with negative signs on the last trading day of the week. The EuroSTOXX 50 widened its initial loss in the further trading course and closed 1.93 per cent weaker at 3,488.56 points on Friday evening.

Mainly because of the weak US stock markets, the DAX also extended its losses. It closed 1.7 per cent lower at 13,432 points on Friday. This brought the weekly minus to 3.2 per cent. The TecDAX started with a much smaller loss, but ultimately lost 1.02 per cent to 3,375.67 points.

Above all, the fact that there are no reliable plans for vaccination caused uncertainty. “For continental European economies and other countries around the world that have not yet significantly accelerated the distribution of the vaccine, this creates the prospect that lockdowns and travel restrictions could last longer or even be more restrictive than at present,” Union Bancaire Privée said.

The environment continued to be very unsettled. On the one hand, investors’ hopes for a quick end to the pandemic are fading. On the other hand, the struggle between small investors and professional investors such as hedge funds has meanwhile led to strong price fluctuations in the overall market.

Besides, individual stocks were influenced by quarterly figures.

The euro held steady at elevated levels in US trading on Friday. Growth data from major euro countries surprised mostly positive and supported the euro. In the evening, the euro was trading at 1.2132 US dollars.

Oil prices were also able to rise today. At 55.88 US dollars, a barrel of Brent today cost 35 cents more than on Thursday. The barrel price of US WTI rose by 11 cents to 52.43 dollars.

Due to the growing nervousness in the stock markets, some investors fled to safe havens like gold. The price of the precious yellow metal increased by 1 per cent to 1,858 dollars per troy ounce.

And the fluctuations in bitcoin also increased again. The cryptocurrency rose by around 20 per cent intraday to approximately 38,000 US dollars before it consolidated at 36,000 US dollars. Observers blamed this on a tweet by Tesla boss Elon Musk with the simple hashtag “#Bitcoin”. Other digital assets, such as Ethereum, Polkadot and XRP, for example, also posted significant gains.

Japan’s industry weakened at the end of the year. Production in the industrial plants of the world’s third-largest economy fell by 1.6 per cent in December compared to November, as the government announced in Tokyo on Friday according to preliminary calculations. Analysts, on average, had expected manufacturing to fall only 1.5 per cent. In November, production had already fallen by 0.5 per cent after a prolonged recovery. The effects of the Corona crisis continued to show in December in a year-on-year comparison. In this view, production was 3.2 per cent below the level of December 2019.

Import prices in Germany rose more weakly than expected in December. As reported by the Federal Statistical Office (Destatis), the index of import prices increased by 0.6 per cent compared to the previous month. Economists surveyed by Dow Jones Newswires had forecast an increase of 1.0 per cent.

The largest US trading platform for cryptocurrencies, Coinbase, is concretising its plans for an IPO.

On Thursday (local time), the San Francisco-based company announced that it would launch its shares via a direct placement. In this process, the securities are listed directly on the stock exchange without the support of investment banks and a prior pricing process. This rather unusual but cheaper option has been used successfully by other larger companies such as the music service Spotify or the office chat app Slack.

Coinbase had already filed an application for a stock listing with the US Securities and Exchange Commission (SEC) in mid-December, setting the course for the first premiere of a major US cryptocurrency exchange on the public capital market. However, it is still unclear when this will happen and how much money Coinbase wants to raise. According to the tech blog “techcrunch”, the company, founded in 2012, was valued at around eight billion dollars in a financing round by investors a good two years ago.