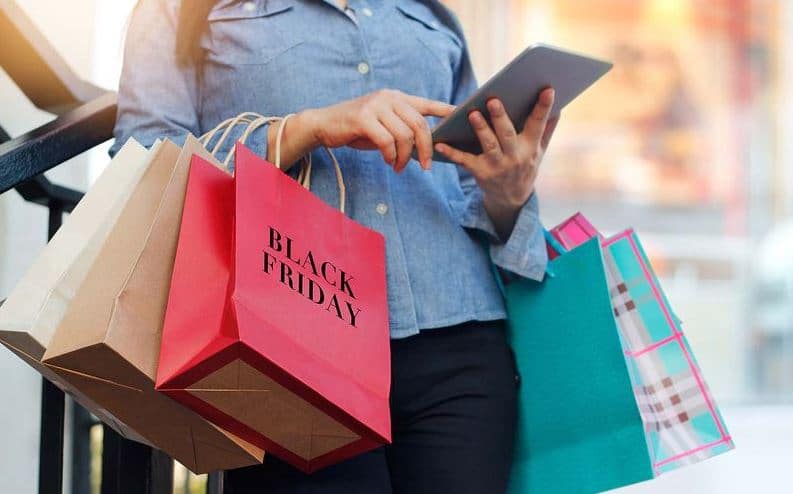 With Black Friday discounts, retailers want to boost consumption. Many retailers have added Cyber Monday to the promotion day, i.e. the Monday immediately following it, or even one or two special offer weeks, such as Black Friday Week or Cyber Week.

For the parcel industry, these discount battles are typically a good thing, because the Christmas business is thus shifted to the front. Many people no longer order their gifts just a few days before Christmas, but they already buy them at the end of November or the beginning of December.

In regards to the tensions between Washington and Beijing, which US President Donald Trump has rekindled, investors’ Advent sentiment got spoiled somewhat. Shortly before Thanksgiving, Trump had signed a law to strengthen the protest movement in Hong Kong. China prohibited itself from interfering in internal affairs and announced countermeasures. With it, the hope for a soon partial agreement between the USA and China disappears.

Over the entire month, however, Wall Street was on a record-hunt. In November, the Dow rose by 3.7 per cent, while the S&P 500 gained 3.4 per cent and hurried from one record high to the next. And for the Nasdaq, it even went up by 4.5 per cent.

Asian equity markets were weaker on Friday. The tensions between the USA and China remain decisive. After the escalation of the conflict over the democracy movement in Hong Kong, uncertainty remains high. It is unclear how the recent escalation will affect the targeted partial agreement in the trade dispute.

The European stock markets remained widely unchanged this Friday. The EuroStoxx 50 closed at 3.703,58 points, a slight minus of 0.02 per cent.

The weak US stock markets also pulled the Dax down. It closed 0.1 per cent lower. Previously, it had been in the plus for a long time in the afternoon. After all, the German benchmark index gained 0.6 per cent over a week. Also, it achieved its third consecutive monthly gain. In November, the Dax gained 2.9 per cent and climbed temporarily to an annual high.

The euro took a roller coaster ride on the currency market. First, the common currency fell below the 1.10 US dollar mark, then it stagnated and rose back to 1.1017 dollars by the evening.

On the oil market, the Opec meeting with allied oil-producing states cast its shadow ahead. On Friday, the Brent variety from the North Sea fell in price by 2.1 per cent to 62.52 dollars per barrel.

On the other hand, the gold price continued its upward trend. At the end of the trading day, the price for one troy ounce of gold was set to $1,463.91, 0.55 per cent more than the previous day.

The most important cryptocurrencies remained stable on Friday. Bitcoin is currently priced at approximately $7,500, while Ethereum costs $150 and XRp $0.23.

Inflation in the Euro-Zone accelerated in November

According to Eurostat, the statistical office, consumer prices were 1.0 per cent higher than a year ago. In October, the increase was still 0.7 per cent. In a monthly comparison, however, the price level fell by 0.3 per cent. Excluding energy and food, consumer prices rose by 1.3 per cent in November.

Trade with the Best Trading Platform for European Traders in 2019

The US fast-food chain Burger King wants to get away from the cheap corner. After the modernisation of many stores with a new, more chic design, the previously meat-heavy menu is now also being spiced up.

“We are increasingly focusing our strategy on higher-quality products,” said Carlos Baron, CEO of Germany, in Munich. “At the heart of our brand are burgers grilled on an open flame, to which we intend to remain true. Beyond that, we want to address however also new target groups. The modernisation of the restaurants is paying off,” said the manager. “In the newly designed restaurants, we have about ten per cent higher sales. Guests stay longer because they feel comfortable in a more pleasant environment and order higher-quality premium products.

The company no longer wants to be “just a brand for burgers and beef,” Baron said. “Both must be in balance. The menu now also includes a vegetable whopper and more salads and wraps.

Burger King has been expanding worldwide for several years to reduce the gap to McDonald’s. “We open about 1000 new restaurants a year worldwide,” Baron said. “Europe is developing strongly, and we are successfully expanding in Germany.”

Although the expansion is to be achieved mainly with larger franchises, Burger King does not want to lose the small restaurateurs. “Some only run a restaurant and do excellent work,” Baron said. “A contract runs for 20 years. It’s like a marriage. This requires trust on both sides.”

The Russian gas giant recorded a sharp drop in profits in the third quarter due to lower gas prices and lower exports. Net profit fell by 45 per cent to 212 billion rubles (about three billion euros), according to the state-controlled company. Total sales shrank to 1.6 trillion rubles in the past quarter from 1.9 trillion rubles in the year-earlier period. Gross revenues from gas supplies to Europe and other destinations, excluding Russia and the former Soviet states, fell by 37 per cent to 587 billion rubles due to weaker prices. Sales volumes also declined.