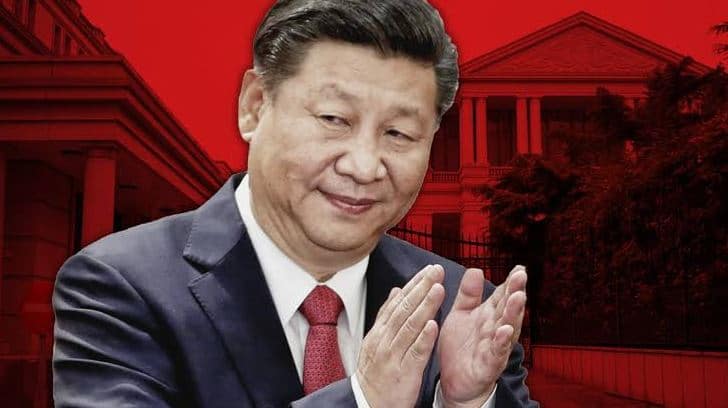 China acts as the grown-up

The Chinese have decided to get out of the childish tit-for-tat-game Trumps. The markets like that.

On Thursday, the Chinese Commerce Ministry said that China would not react immediately to the new tariff increases by the Trump administration, which are to come into effect on September 1.

Instead, a ministry spokesman pointed out that both sides would currently agree on the details of new trade talks in September.

Global stock markets naturally well receive such conciliatory words. The optimists hoping for a solution to the trade dispute are regaining the upper hand.

The US stock markets are likely to continue their recovery before the weekend. The Dow Jones is currently up about half a per cent before the stock market launch. The NASDAQ Composite tech index is also expected to be friendly.

The positive statements in the US-Chinese trade conflict should continue to boost Wall Street this Friday. After China initially began to speak conciliatory tones, US President Donald Trump also announced the day before that talks with China were to be continued. The positive signals on Thursday gave investors hope and prices rose.

In Asia, too, prices are rising at the end of the week.

While the Shanghai Composite finally dropped 0.16 per cent to 2,886.24 points after initial gains, the Hang Seng in Hong Kong finally stood 0.08 per cent higher again at 25,724.73 units. The Japanese Nikkei is about to close trading in Tokyo at 1.3 per cent higher.

The Dax starts the last trading day of this month with slight price gains. At the opening, German blue chips were 0.1 per cent higher at 11,850 points. In the course of the first trading hour, the Dax gains more and more. Up to 11,937 points, it goes upward, a plus of 0.8 per cent in the point.

However, the latest news on the German economy is a negative factor for today’s Dax development.

German retailers started the second half of the year with unexpectedly high sales losses. Their revenues shrank by 2.1 per cent in July compared to the previous month, as the Federal Statistical Office announced on Friday.

The weakness of German retailers comes at an inopportune time, as the German economy is currently particularly dependent on strong domestic demand with robust private consumption. Trade conflicts, the Brexit uncertainty and the weaker global economy are presently dampening demand for goods “Made in Germany”.

The euro falls on Friday, continuing the losses of the previous day. The common currency is currently trading at 1.1038 dollars. The ECB’s expected easing policy is squeezing the euro.

The somewhat better than expected US consumer spending in July shows how strong the US economy is currently. Growth was 0.6 per cent, while only 0.5 per cent was expected. The economic indicator for the greater Chicago area, the Chicago PMI, as well as the final consumer confidence of the University of Michigan in August are expected in the further course of the year.

The Australian dollar is also feeling the pressure, lost further ground and is approaching the critical $0.67 mark.

The easing risk aversion of investors is a burden on the gold price. After its recent rally, the troy ounce of gold is trending sideways at currently 1,527 dollars.

Oil prices are making slight gains. Most recently, they had benefited from the sharp fall in US inventories, which had fueled hopes for stronger demand. The new developments in the trade dispute also provide a tailwind.

In addition to the Immo shares, the stock of the Frankfurt stock exchange operator Deutsche Börse is at the top of the Dax. The share is a candidate for inclusion in the EuroStoxx 50 index.

Adidas is also among the biggest winners. There is even talk of inclusion in the Stoxx Europe 50, which also includes European stocks that do not come from the eurozone (such as Switzerland or Great Britain). One of the few losers is Munich Re’s paper – with hurricane “Dorian” approaching the Florida coast, investors are becoming aware that the hurricane season is beginning in the Caribbean.

The index provider Stoxx Ltd., a subsidiary of Deutsche Börse, will decide based on the closing prices after the end of trading on Friday and will publish any changes to the indices on Monday evening (September 2). The resolutions will then take effect on Monday, September 23, at the start of trading.

Turkey has a good chance of winning the contract for the new Eastern European plant. Two insiders told the news agency Reuters in Ankara that the Wolfsburg carmaker was largely prepared to invest a billion euros in the country. Currently, negotiations are still underway with the authorities about the excise tax for passenger cars applicable in Turkey.

The computer group Dell has returned to profitability thanks to good business with PCs and cloud services. On balance, Dell Technologies earned 4.51 billion dollars, after a minus of 461 million dollars in the same period last year. With revenues of 23.4 billion euros, market expectations were slightly exceeded. The Dell share jumped nine per cent in post-trade trading.

The US entertainment group has sold its majority stake in the regional sports channel Yes. The 80 per cent stake in the network, which broadcasts games from New York sports teams such as the Yankees and Brooklyn Nets, goes to a consortium of buyers including online giant Amazon and media company Sinclair. The channel is valued at a total of 3.47 billion dollars. With the sale, Disney is fulfilling a condition imposed by the competition authorities of the US Department of Justice for the takeover of large parts of its rival 21st Century Fox.