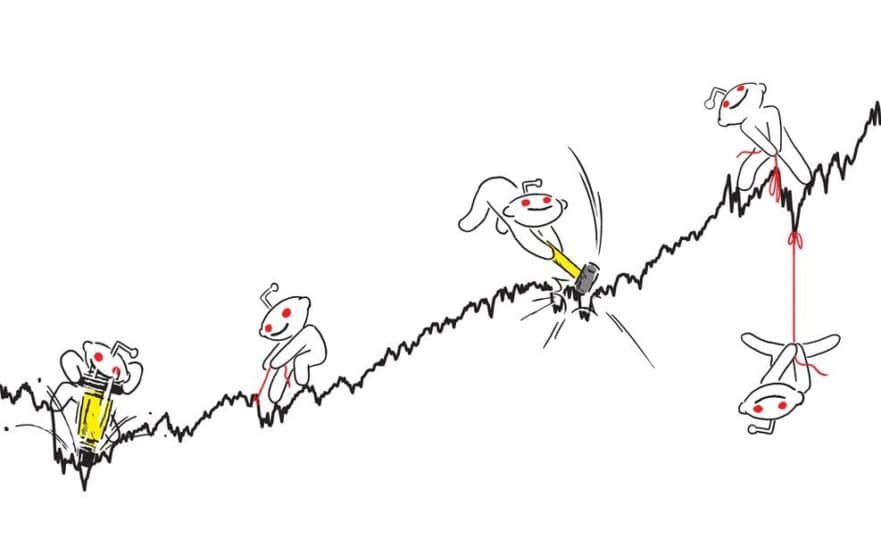 At the start of the week, the financial markets have at least recovered somewhat from the immediate GameStop shake-up. Fundamental questions remain, however, and the debate about more stringent market regulation and oversight will continue.

The stock market’s bread and butter continue to be the political wrangling over another massive stimulus package in the US. President Joe Biden is seeking talks with Republicans in the Senate. After ten Republican senators submitted an alternative proposal to Biden’s targeted package over the weekend, the Democratic president invited the group to a White House meeting on Monday to discuss the ideas. But it was not only the wrangling over the new aid programme for the economy that dominated the markets today. The corona situation, lockdown measures, and the GameStop aftermath were also on market participants’ minds.

The mood on the US stock markets was good at the beginning of the week, and Wall Street recorded substantial gains.

The Dow Jones started trading slightly stronger and then extended its gains, ending the day up 0.77 per cent at 30,212.20 points. The NASDAQ Composite also opened significantly higher, remained in the profit zone afterwards and at the end of trading stood 2.55 per cent higher at 13,403.39 index points.

The US markets seemed to have recovered from last week’s slide for the time being. However, whether hardened fronts between retail investors in the online Reddit community and hedge fund managers with short positions will soften remains to be seen. The private investors had driven up the share prices of companies like GameStop or AMC last week.

In Asia, the most important indices recorded gains at the start of the week. The Japanese benchmark index Nikkei climbed by 1.55 per cent to 28,091.05 points by the end of trading. In mainland China, the Shanghai Composite was 0.64 per cent firmer at 3,505.28 points, while the Hang Seng ultimately gained 2.15 per cent to 28,892.86 units in Hong Kong.

Asian stock markets rallied on Monday. According to traders, AstraZeneca and BioNTech want to provide more vaccine for the EU created a positive mood and more courage among investors. The fact that sentiment in China’s industry cooled against the backdrop of seasonal effects and new local corona outbreaks did not dampen the mood at the beginning of the year.

The European stock exchanges went up significantly on Monday.

The DAX in Frankfurt also opened the session stronger and continued to increase afterwards. It exited the trading session with a plus of 1.41 per cent at 13,622.02 points. The TecDAX was also clearly in the profit zone after a firmer start. By the end of the trading day, it had gained 1.20 per cent to 3,416.20 points.

After the losses of the previous week, positive vaccine reports, among other things, supported the mood of investors. Both AstraZeneca and BioNTech want to provide more vaccine to the EU.

In Germany, retail sales slumped in December due to imposed corona restrictions. The decline was significantly stronger than expected. This put the euro under intense pressure today, and the European common currency weakened on the Forex market to currently 1.2076 US dollars.

There was no clear trend on the oil market for a long time today, before prices turned positive in the course of trading. Prices for both North Sea Brent and US WTI crude remain at a high level. Brent oil rose 93 cents to $55.95, while WTI gained 86 cents to $53.06.

The gold price hovered in its familiar trading range and could not make a big break-through like his little brother silver. It reached an intraday high of $1,872 but could not hold or extend these gains, closing only slightly higher at $1,856 per troy ounce.

The precious metal silver seems to have become the new object of speculation on the financial market. The price of a troy ounce rose above the 30 US dollar mark on Monday for the first time since the beginning of 2013. Shares in silver producers also soared at the start of the week in New York.

The cryptocurrency market also showed wild swings in certain digital assets today after speculators positioned themselves for targeted pumps. After DodgeCoin, which was in its way promoted by Elon Musk, over the weekend groups organised themselves to pump the “forbidden fruit in crypto” namely XRP. The XRP price increased from Friday to Monday afternoon from $0.26 to as high as $0.72 before a huge sell-off took place, depressing the price to currently $0.38. Bitcoin and Ethereum, on the other hand, stayed relatively flat at around $34,000 and $1,330 respectively.

Against the backdrop of seasonal effects and new local corona outbreaks, sentiment in China‘s industrial sector cooled in January. A purchasing managers’ index published by the Chinese business magazine “Caixin” on Monday came in at 51.5 points last month, down 1.5 points. Already at the weekend, the official Purchasing Managers’ Index of the Chinese Bureau of Statistics had revealed a slightly less optimistic mood. The PMI index fell from 51.9 to 51.3 points.

The slight decline was explained by the lower business activity around the Chinese New Year, which falls on 12 February this year, said China’s chief statistician Zhao Qinghe.

The number of short-time workers in Germany rose by almost 20 per cent to 2.6 million people in January. According to the Ifo Institute, this affected 7.8 per cent of employees subject to social security contributions, compared to 6.6 per cent in December. The hospitality industry was hit the hardest.

The upswing in the German industry continued in January despite increasing supply chain disruptions. Although the purchasing managers’ index surveyed by IHS Markit in this sector fell to 57.1 from 58.3 points, it remained well above the growth threshold of 50 points. Economists had expected a reading of 57.0.

The industrial sector in the eurozone also remained on a growth path for the seventh month in a row in January and expanded strongly once again. According to the second release by the IHS Markit Institute, the Purchasing Managers’ Index (PMI) for the sector slipped from 55.2 to 54.8 points but remained well above the growth threshold of 50 points.

The mood in British industrial companies did not deteriorate as much as feared in January. The purchasing managers’ index of the research company IHS Markit fell by 3.4 points to 54.1 points compared to the previous month, as Markit announced in London on Monday after a second estimate. The first estimate was 52.9 points. Economists had, on average, expected the first estimate to be confirmed. In December, the indicator had reached its highest level in three years.