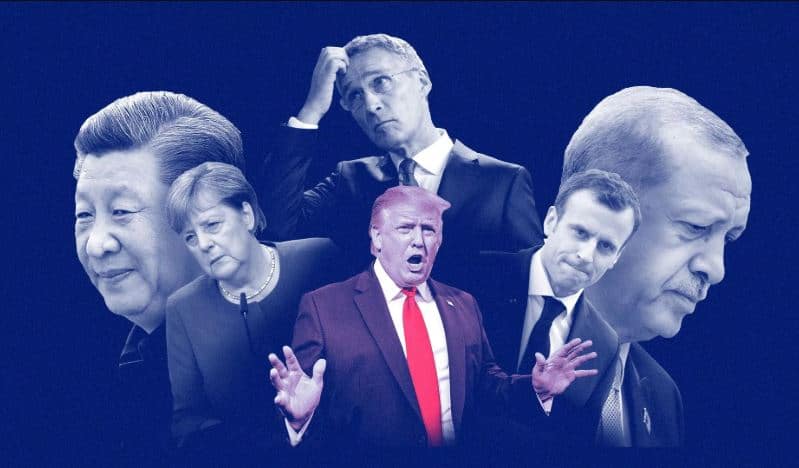 At the beginning of the new trading week, everything looked extremely positive. The markets in Europe were boosted by more positive than expected economic data from both China, Germany and Europe as a whole and shot up. But then everything came to an abrupt end. Donald Trump is now out of the blue accusing Argentina and Brazil of weakening their currencies at the expense of the USA. That is why the US president “immediately” increased tariffs on steel and aluminium imports from these two countries.

The word “penalty tariffs” shocked investors across the board and reminded them that European goods could be subject to penalty duties at any time as well. Not to mention that this could now further fuel the US-Chinese trade dispute, a matter that seemed as almost resolved.

The US stock markets reacted sensitively to the newly triggered unrest on the market.

Asian equity markets rose on Monday after robust economic data from China. The CSI 300 index with the 300 most important stocks on the Chinese mainland stock exchanges rose by 0.1 per cent after the most recent price losses. In Hong Kong, the Hang Seng gained +0.34% with a gain of 0.4%. In Japan, the Nikkei +1.01% even rose by one per cent.

China’s industry grew again in November for the first time in seven months. The Purchasing Managers’ Index (PMI), published by the statistical office on Saturday, climbed to 50.2 points – the highest value since March. Above 50 points, growth is signalled. Analysts had expected 49.5 points after the index had posted 49.3 points in October.

The rise was attributed to rising domestic demand. This is further proof that the global economy has overcome its weak phase.

The EuroSTOXX 50 was quoted unmoved to sound the starting bell but was then able to work its way clearly into green terrain. In the further course, however, the index fell back into negative territory and ended trading at minus 2.08 per cent at 3,626.66 points.

The Dax 30 opened with a mark-up and initially rose further. However, it completely lost its gains at noon and slid deeper and deeper into the loss zone in the course of the day, so that it also broke through the psychologically important mark of 13,000 points downwards and closed 2.05 per cent lower at 12,964.68 points. The TecDAX also showed itself to be even firmer in the morning, but then also slipped significantly into the red, ultimately losing 2.43 per cent to 2,992.02 index units.

While the Dax fell to its knees, the euro continued to appreciate. The European Central Bank (ECB) set the reference price at 1.1023 (Friday: 1.0982) dollars. At the close of trading in Frankfurt in the evening, the euro cost 1.1070 dollars.

Meanwhile, the favourite child of the Forex world continues to be the New Zealand Dollar. The NZD rose after the nation’s terms of trade rose to their second-highest level ever in the September quarter. Further, the NZD/USD currency pair continued gaining positive traction through all trading sessions on Monday and climbed to near one-month tops, around the 0.65 region. The pair caught some aggressive bids and finally broke out of its close two-week-old consolidative trading range.

Oil prices rose on Monday and increased profits from early trading until noon. They were able to make up some of Friday’s heavy losses. A barrel of the North Sea variety Brent cost 61.87 US dollars most recently. That was 1.38 dollars more than on Friday. The price for a barrel of the American variety West Texas Intermediate (WTI) rose by 1.27 dollars to 56.44 dollars.

After a dip below $1,455, the gold price recovered back to above $1,462 after the market returned to a more risk-averse notion.

Cryptocurrencies remained stable on Monday without any major price fluctuations for top coins such as Bitcoin, Ethereum, XRP, Litecoin and co.

Under the critical gaze of the Fridays for Future movement, the 25th UN Climate Change Conference starts today, Monday, in Madrid. A total of around 50 heads of state and government have announced their intention to attend. At the ministerial level, however, negotiations will not take place until the second week of the conference. However, there are considerable doubts as to whether the summit can bring about a real breakthrough.

Chile remains in the chair, as the meeting was originally to take place in the South American country. Because of the social protests there, Madrid took over as host at short notice, where the summit was organised in record time at the Ifema exhibition centre. Delegations from 196 countries as well as the EU and international organisations will take part, with the end scheduled for 13 December.

The interest of institutional investors in the crypto market continues to grow. BlackRock, the world’s largest independent asset manager, has now acquired a stake in a crypto service provider.

BlackRock has shed its scepticism about the crypto market. At least one of the fund company’s most recent investments indicates this. According to Neptune Dash, BlackRock has acquired a total of 11.47 per cent of the Dash Masternode company.

The Spanish oil company Repsol has written off billions due to the expected costs of reducing CO2 emissions.

Oil and gas prices will be lower than expected in the future due to the gradual decarbonisation of the economy in line with the Paris climate targets, and the costs for future CO2 emissions will probably be higher, the company announced in Madrid on Monday evening. In the light of the new assumptions, Repsol will revalue its assets and presumably show an after-tax impairment of around 4.8 billion euros in its 2019 financial figures. The main focus is on exploration and development projects in the United States of America and Canada.

The company stated that the distribution to shareholders would not affect the amortisation. In the first half of 2020, Repsol intends to present investors with a new strategy for the years up to 2025. Repsol also stated that it wanted to become CO2-free by 2050.