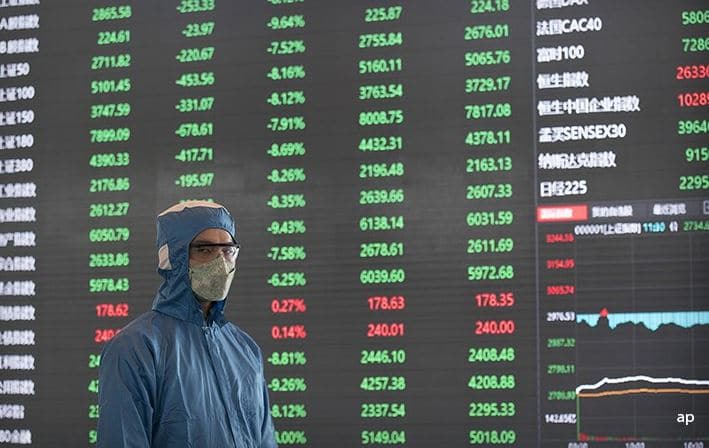 After last week’s price losses, some investors retook the plunge on Monday and dared to go on the offensive. But whether this is the prelude to a more substantial recovery remains to be seen.

The uncertain situation surrounding the coronavirus continues to determine the behaviour of market participants, and sharp price fluctuations must be noted. Yesterday, the Far East markets, in particular, suffered considerable losses.

At the start of the new week, a clear recovery was observed on Wall Street.

The leading index Dow Jones had already started with a plus and then rose significantly. Finally, it ended trading 0.51 per cent higher at 28,399.81 points. The tech stocks index NASDAQ Composite extended its early gains and closed 1.34 per cent stronger at 9,273.40 units.

Although the coronavirus continues to spread, which continues to raise concerns about its impact on the economy. However, the greatest horror has been forgotten for the time being, and the focus has shifted to the positive economic data.

At the beginning of the week, the markets in the Far East showed negative signs in most cases. China’s stock exchanges, in particular, suffered heavy losses.

After the one-week public holiday break, the Chinese stock markets saw a clear downward trend. They were only now reacting to the rapid spread of the coronavirus. Weaker Chinese economic data also weighed on the economy. The mood in the small and medium-sized industrial companies there clouded over at the beginning of the year. According to the business magazine Caixin, which surveys the indicator, the indicator fell by 0.4 points to 51.1 points compared with the previous month. This is the lowest level in five months. Analysts had expected a slightly more pronounced deterioration to 51.0 points. At more than 50 points, the survey still points to growth.

The Chinese central bank has also supported the country’s financial system with a limited interest rate cut in addition to a cash injection because of the coronavirus crisis. The interest rate for repo transactions with a term of seven days, with which the country’s commercial banks are supplied with central bank money, has been reduced by 0.10 percentage points to 2.40 per cent, the People’s Bank of China announced on Monday. The interest rate for 14-day transactions was set at 2.55 per cent.

Europe’s stock markets showed positive signs on Monday. The EuroSTOXX 50 started on green ground and remained there throughout the day. The index left Monday trading at 3,661.38 points 0.56 per cent higher.

The Dax 30 climbed by almost 100 points to 13,077 points. But then the gains crumbled again. In the end, the leading index leaves trading at 13,045 points with a plus of almost half a per cent.

After China’s stock markets suffered heavy losses, the Chinese yuan came under selling pressure. In trading with the American dollar, China’s currency lost around 1.2 per cent in value.

The pound sterling was also under considerable pressure, also losing value against all major currencies. British Prime Minister Boris Johnson announced a tough line for the negotiations on future trade relations with the EU. According to the announcement, the British government does not want to be contractually bound by EU standards on environmental protection, workers’ rights and state economic aid under any circumstances.

The selling pressure on the crude oil market is increasing: For fear of lower Chinese demand due to the coronavirus outbreak, the price of Brent crude falls 6.6 per cent to a 12-month low of $54.27 a barrel and heads for the biggest daily loss in six months. The US oil WTI falls by 3.2 per cent and at 49.92 dollars is also cheaper than it has been since January 2019.

Cryptocurrencies remain vigilant, and the most important digital assets trade around the zero line. A Bitcoin currently costs $9,300 – a minus of almost 1 per cent. Ethereum gained slightly to just above $189, and the XRP price increased by nearly 1 per cent to $0.2545.

Google’s parent company Alphabet has exceeded earnings expectations with its figures for the final quarter and the full year 2019.

The shares of the electric car manufacturer are rushing from record to record. On Monday, the share broke through the 700 dollar mark and climbed to a record high of 733 dollars. The company’s market value thus reached around 125 billion dollars – as much as BMW and Volkswagen combined.

The energy company Shell has sold its refinery in Martinez, California, to PBF Energy for 1.2 billion US dollars. Part of the transaction is the continued supply of oil products from the refinery to Shell’s branded fuel business, which the company has retained, Royal Dutch Shell plc announced. The sale is part of the group’s strategy to sell approximately half of its refineries worldwide. In recent years, new refineries in countries such as India and China have led to an oversupply of global refining capacity, which has depressed profits.

The Shell share posted a loss of ultimately 1.97 per cent to 19.64 British pounds in London on Monday.