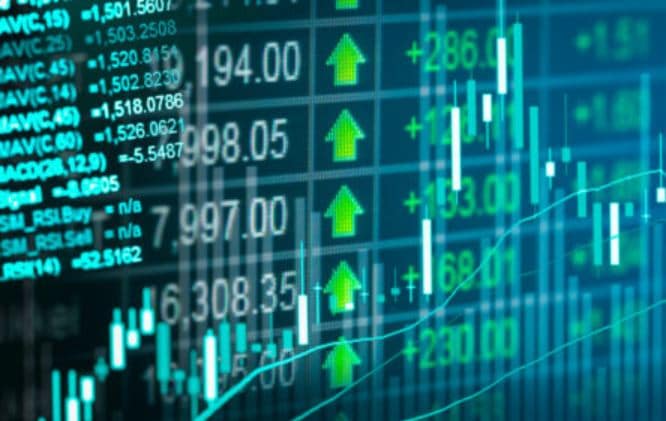 Central bank liquidity and the hope for a vaccine remain positive drivers for the stock markets at the beginning of the new trading week.

Price jumps on the Asian stock markets and encouraging economic data from Germany, and the US also fueled the stock market rally further on Monday.

Among the individual stocks, several heavyweight US technology stocks continued their ascent with further record highs. Apple shares, for example, jumped as high as $375. The shares of Microsoft and Tesla also continued their recent high and reached historic highs.

After the long weekend, things continued to improve on Wall Street on Monday.

The US leading index Dow Jones had opened Monday’s trading in a friendly manner and remained in the black afterwards. In the end, it closed 1.78 per cent higher at 26,287.03 points. The NASDAQ Composite also started with gains and then continued to appreciate until it finally closed 2.21 per cent stronger at 10,433.65 index units.

Solid economic data from Asia also spilt over into US trading on Monday. This was due to a Chinese news report which showed that the reforms in the Chinese stock market are proving to be positive. Better-than-expected US economic data provided additional support. The ISM Manufacturing Purchasing Managers’ Index for the services sector was 57.1 in June. The Markit Purchasing Managers’ Index was also higher than forecast.

On Monday, the Far Eastern stock markets seamlessly continued the strong performance of the previous week. In mainland China, in particular, share prices rose sharply. The CSI 300, which comprises the 300 most valuable companies, reached its highest level in around five years. Most recently, the stock market barometer advanced by 5.2 per cent to 4,651 points in late trading.

The rally was spurred on by a report in the Chinese financial newspaper “Securities Times”, which highlighted stock market reforms and high liquidity as positive for equities. It also said that a “healthy” rally in China’s stock markets is now even more critical for economic recovery after the Corona pandemic than before.

The Dax 30 ended the day with a plus of 1.64 per cent to 12,722.45 points. The German stock market barometer thus continued its previous week’s gain of more than three and a half per cent.

In addition to price jumps on the Asian stock markets, the Dax was also driven by encouraging economic data. German industry, for example, again received significantly more orders in May. Although analysts had hoped for a more substantial increase, a double-digit growth rate was nevertheless recorded. Factory orders had increased by 10.4 per cent vs 15 per cent expected as market consensus.

In the forex market on Monday, the euro was unable to maintain its significant gains from European afternoon trading in the US. Nonetheless, the common currency managed to hold above the 1.13 US dollar level and was last quoted at $1.1313. The European Central Bank (ECB) had set the reference rate at 1.1325 (Friday: 1.1224) US dollars.

Oil prices rose on Monday, supported by friendly financial markets. The barrel (159 litres) of Brent oil had increased by 52 cents by the evening compared with Friday, to 43.32 US dollars. The variety West Texas Intermediate (WTI) rose by 22 cents to $40.86.

The price of gold holds steady at $ 1,784 an ounce and thus remains within reach of its recent eight-year high. During the day, the gold price recorded some strong gains. In the evening, there was some profit-taking.

Cryptocurrencies also joined the party-mood of the financial markets today and rose sharply across the board, though the two leading digital assets, Bitcoin and Ethereum, posted the weakest gains. Bitcoin increased by 0.7 per cent to $9,250, and Ethereum gained 1.9 per cent to $236 on the daily chart. XRP, on the other hand, the number three digital currency in market capitalization, jumped up 2.5 per cent to currently $0.1860. Biggest gainers of the leading digital assets were Bitcoin Cash (4.2 per cent), Bitcoin SV (14.5 per cent), Cardano (7.2 per cent) and ChainLink (13.6 per cent).

Heavy price swings continue to burden Wirecard shares, which plummeted by up to 18 per cent in intra-day trading. According to a press report, the presumed air bookings at the insolvent payment service provider were probably also intended to conceal accumulating losses in its own core business.

Uber, the world’s largest transportation services provider, is expanding its food delivery business by taking over the start-up Postmates. The US companies announced on Monday that they had agreed on a deal worth around 2.65 billion US dollars. Uber intends to pay the purchase price entirely in its own shares. Postmates is the smallest competitor in the booming US market for food delivery and is to strengthen Uber’s service Uber Eats.

Uber had recently also shown interest in its larger US rival GrubHub, but the contract was then awarded to its competitor Just Eat Takeaway. In the USA, food deliveries via smartphone apps are flourishing because many people are staying at home during the Corona crisis. For Uber, this is a welcome growth driver, as the transport service main business is weakening. However, it is a highly competitive market in which there is hardly any money to be made so far.

The electricity company RWE wants to play a major role in the future topic of hydrogen. “The potential for hydrogen is huge – and RWE sees great opportunities in this business”, company boss Rolf Martin Schmitz told the newspaper “Handelsblatt”. “For us, hydrogen is a big subject.” According to Schmitz, the company wants to get involved in both the production and trade of hydrogen.