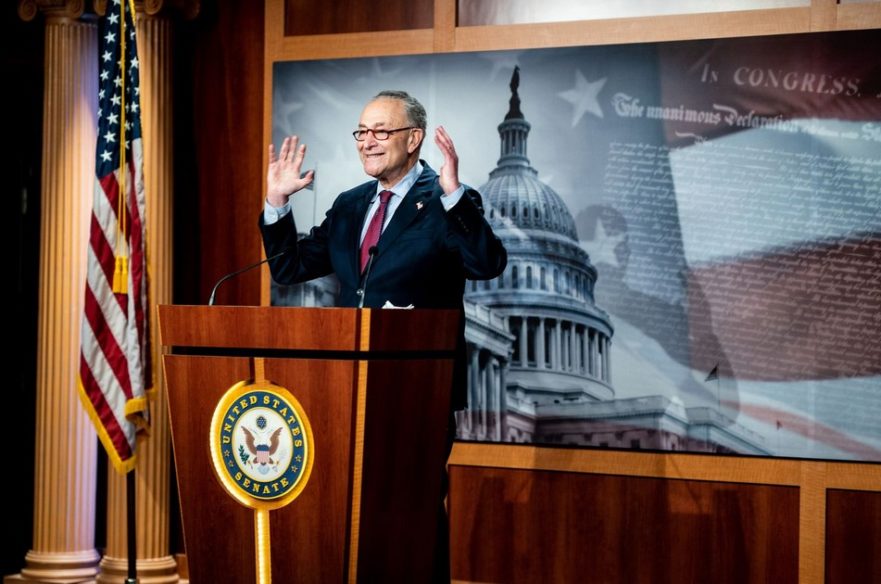 The new trading week kicked off with a bang. Surprisingly, investors celebrated the passage of the $1.9 trillion US American stimulus package in Congress at the weekend. Why some traders remain very skeptical is the fact that everything else is faded out, and in the end, everything came out of the aid package as it has been known for a long time.

Everything else, such as inflation concerns or the collapse of the economy due to the lock-down, would be pushed aside at the moment – at least for non-tech stocks because these suffered further sharp declines on the NASDAQ.

The US leading index was friendly at the start of the week, while tech stocks fell significantly. The Dow Jones opened the session marginally higher on Monday and then climbed further. At the closing bell, the leading index was up 0.97 per cent at 31,802.51 points. The NASDAQ Composite, on the other hand, extended its initial loss and closed 2.41 per cent lower at 12,609.16 points.

Inflation fears and economic optimism have been driving up interest rates in the USA for weeks. As this makes financing for high-growth sectors more expensive, investors have recently shifted from the technology sector to blue chips. This trend continued on Monday and even sent the Dow index to a new record high while tech stocks suffered further losses.

On Monday, Asia’s markets didn’t pay much attention to positive forecasts from the United States and trended lower. Even the US Senate’s approval of the billion-dollar stimulus package did not seem to be able to lift the mood. And even though Chinese export and import data exceeded expectations in the first two months of 2021, the mood in Asia remained gloomy.

Interestingly, optimism prevailed on the European trading floors today. The EuroSTOXX 50 already started the first trading day of the week on a firmer footing and further expanded its gain in the day. By the end of today’s trading, it had climbed by 2.55 per cent to 3,763.24 points.

The relief was provided on the one hand by the US Senate’s approval of the USA’s billion-dollar economic stimulus package. On the other hand, Chinese import and export data were well above expectations. Positive impulses were also provided by the easing of corona restrictions and progress on vaccination campaigns.

The euro fell on the foreign exchange market today to its lowest level since the end of November. In late European trading, the common currency rate fell to 1.1846 US dollars; in New York trading, the euro last traded for 1.1855 US dollars. The greenback continues to experience strong tailwinds and trades firmer against many other currencies such as the British pound or the commodity-linked currencies like the Canadian and Australian dollars.

The inflation scenario is also receiving additional fuel from rising commodity prices. The North Sea Brent crude paid over 71 US dollars in the morning, and the US light oil WTI was 67.98 US dollars. This was the highest price since October 2018 and was triggered today by an attack by Yemeni Huthi rebels on Saudi Arabia’s oil facilities. But the real driver of crude prices is the prospect of a post-crisis global economic recovery. Last week, to the surprise of many market participants, the Opec+ oil association did not increase its production, which boosted oil prices. \

With a stronger US dollar, gold and silver continued their decline and were last seen at $1,682 and $25.110 per troy ounce, respectively.

Cryptocurrencies gained further ground today, with Ethereum leading the pack of altcoins pushing higher. Bitcoin also managed to net a 6.5 per cent daily gain to $53,800. Ethereum rose 7.4 per cent to $1,845, while Cardano remained at $1.15 per coin, and XRP increased by almost 4 per cent to $0.4830. The biggest increase in price on the daily chart recorded ChainLink with a 10.5 per cent gain to $31.70.

The rise in the Sentix economic index for Germany continued in March. According to Sentix, the index rose to plus 11.9 (February: plus 8.6) points, the highest value since November 2018. The situation assessment index increased to minus 9.5 (minus 15.5) points, and the expectations index remained at plus 35.8 points.

Investor sentiment in the eurozone continued to improve in March. As the analysis firm Sentix announced in Frankfurt on Monday, the economic indicator it surveys rose by 5.2 points to 5.0 points. This is the highest level in over a year. The assessment of the current situation brightened particularly significantly. The expectations component rose only slightly.

Production in Germany‘s manufacturing sector developed much weaker than expected in January – albeit from a significantly upwardly revised previous month’s level. According to the Federal Statistical Office (Destatis), it fell by 2.5 per cent compared with last month. It was 3.9 per cent below the same month’s level the previous year, after being 1.0 per cent higher in December. Economists surveyed by Dow Jones Newswires had forecast a monthly increase of 0.2 per cent.