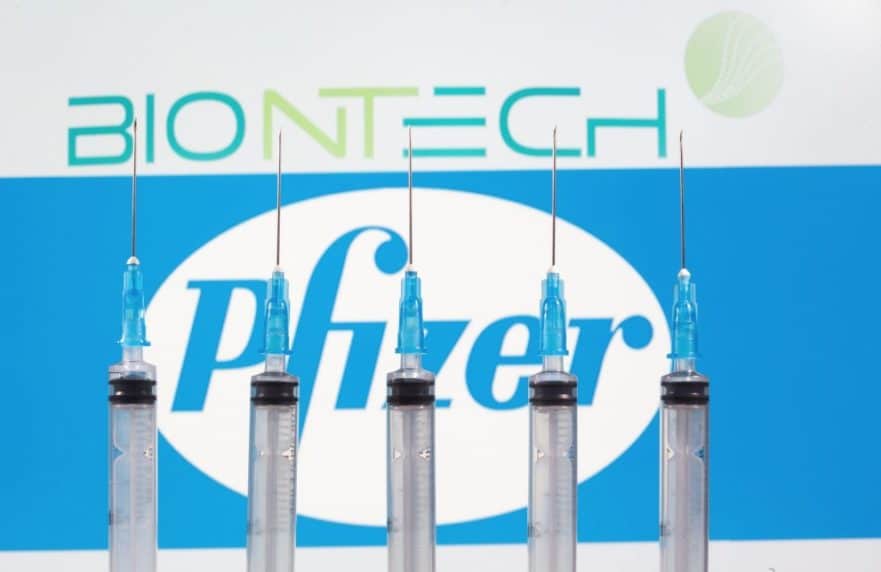 If we had heard the news from BioNTech/Pfizer about a “90% successful vaccine” already a week ago, the US presidential election might have turned out differently. But the timeline was different, as we all know now, and today the stock markets celebrated both Biden and the pharma giants BioNTech/Pfizer with massive course fireworks.

Not only had the change of power in the White House already put investors in a good mood – at the latest after the news of the success of the new Covid-19 vaccine from the Mainz biotech company BioNTech, share prices exploded. The efficacy of the vaccine is said to be 90 per cent. “This is the first evidence that a vaccine in humans can prevent Covid-19,” said BioNTech boss Ugur Sahin.

In expectation of normal conditions, the old economy, which had been so badly shaken, experienced a resurgence – airlines, cyclical companies, but also insurance companies and the car industry was among the big winners. But banks were also in demand, and the European bank index experienced the biggest daily gain in over ten years with a plus of over 13 per cent.

After Joe Biden won the US election, Wall Street started on a strong note on Monday. The Dow Jones rose 4.04 per cent to 29,467.90 digits at the start of the stock market and jumped to a new record high of 29,933.83 points early on. In the end, it was still sufficient for a plus of 2.95 per cent to 29,158.56 points. Meanwhile, the technology-heavy NASDAQ Composite had to relinquish its early gains and even plunged into the red. With a discount of 1.53 per cent, the index closed the day at 11,713.78 points.

At the start of the new trading week, investors celebrated the victory of Democratic Trump challenger Joe Biden, who won the election this weekend. Meanwhile, current US President Donald Trump still plans to take legal action against the outcome.

Study results from BioNTech further supported the good mood. The Mainz-based pharmaceutical company presented encouraging results on its corona vaccine at noon. According to these results, the drug is “more than 90 per cent effective”, the company announced.

Asia’s stock markets recorded strong gains on Monday following the decision on the US presidential election last weekend. On Saturday it was announced that Biden had won the election. Trump, however, still refused to admit defeat – he announced that he would appeal against it.

Europe’s stock exchanges were also caught by market euphoria, and some of them rose sharply. The EuroSTOXX 50 went up by a whopping 6.36 per cent and ended at 3,407.91 positions.

In Germany, the Dax 30 opened the meeting already 1.87 per cent up and jumped even more strongly at midday, at times surpassing the 13,200 mark. The leading German index was up 4.94 per cent to 13,095.97 points. The TecDAX also gained ground after starting slightly higher, but ultimately lost 1.30 per cent to 2,974.85 points.

It was investor confidence on the corona and US presidential election issues that drove the market higher today.

At the beginning of the week, the euro weakened in a volatile Forex trading session. In the evening, the single currency was exchanged for 1.1818 US dollars, over half a cent less than in the morning.

Meanwhile, the weaker greenback is benefiting oil prices, which are quoted in US dollars. The US grade WTI rose by over 8 per cent to $40.50, which is unusual even on the volatile oil market. Brent oil also rose strongly and at $42.50 it costs 7.3 per cent more than the day before.

Hopes for a corona vaccine have put a massive strain on investments such as gold, which were considered safe. The price of a troy ounce on the London Stock Exchange fell to $1,852, a drop of around $100 in just a few hours. Most recently, the troy ounce cost $1,857, almost 5 per cent less than on Friday. The silver price also fell sharply, in percentage terms even more than its “big brother” gold.

Cryptocurrencies remained relatively stable today, with both Bitcoin and Ethereum losing 0.6 per cent to $15,270 and $447 respectively. XRP increased by 1.9 per cent to $0.2550, and the DeFi (decentralized finance) cryptocurrency ChainLink even rose by 3.5 per cent to $1285.

At the beginning of the week, investors were looking at leading indicators from Japan and China’s Purchasing Managers’ Index. Unexpectedly strong export growth in China’s economy after the corona crisis is giving a boost again. With growing global demand, exports of the world’s second-largest economy rose by 11.4 per cent in US dollars compared to the same month last year – the fastest rate in 19 months. As the customs authorities also reported, foreign trade climbed by 8.4 per cent overall. The trade surplus rose more than expected to 58.4 billion US dollars.

German exports continued to recover from the corona crisis before the outbreak of the second pandemic wave. In September, exports rose for the fifth month in a row, by 2.3 per cent compared to the previous month, the Federal Statistical Office reported on Monday. Economists interviewed by Reuters had only expected a plus of 2 per cent, after an increase of 2.9 per cent in August. Imports, on the other hand, fell by 0.1 per cent, after having grown for four consecutive months.

Warren Buffett bets on his company

Warren Buffett’s investment company, Berkshire Hathaway, is increasingly turning to share buybacks during the corona crisis. In the three months to the end of September, the conglomerate spent around $9.0 billion on the buyback of its shares. This means that more was spent on this type of share price management in the third quarter alone than ever before in a full calendar year. In the year, the amount already totals around 16 billion US dollars.

Many of the top tier cannabis producers received a strong price boost after presenting their key figures for the past quarter. Canopy Growth and Aurora Cannabis exceeded sales expectations and also showed a much friendlier picture overall.