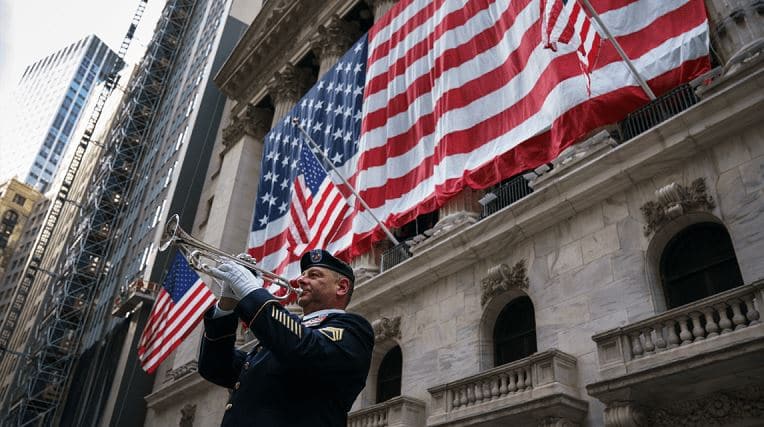 Not much happening on Veteran’s Day

Because of the commemoration of the end of the First World War, in many countries, and especially in the USA, the trading volume on the stock exchanges had been much weaker than usual. Bond trading on Wall Street remained completely closed.

There were also new impulses from companies or any major economic releases due this Monday. The balance sheet season does not pick up speed again until Tuesday. In this respect, the weekend’s issues still dominated the stock markets.

The customs dispute continues to dominate the mood, said analyst Jeffrey Halley of brokerage house Oanda. President Donald Trump had said last weekend that the trade talks with China were “very good”. Previously, however, he had stressed that he had not agreed to a reduction in reciprocal punitive tariffs. Speculations about this had boosted the stock markets last week.

Additionally, in Hong Kong, renewed conflicts between demonstrators and the police put pressure on the mood and caused restraint in the market.

The escalation of violence in Hong Kong weighs on US stock exchanges on Monday.

The Dow Jones opened 0.36 per cent weaker at 27,580.66 points and is currently hovering around the zero line. The tech stocks index NASDAQ Composite lost 0.52 per cent to 8,431.26 points at the opening of trading but can leave its daily lows behind.

The stock markets in Asia presented themselves with taxes on Monday.

Europe’s most important stock markets showed little movement at the start of the week.

The EuroSTOXX 50 tended below the zero line until noon but was then able to work its way up to the zero line. The index dropped by a marginal 0.06 per cent to 3,697.29 points. Market observers suspected a consolidation after the strong previous week. In addition, the sentiment was depressed by the renewed clashes in Hong Kong.

The euro rose slightly on Monday. At the close of trading, the common currency traded at 1.1039 dollars, marginally higher than in the morning. It was able to stop last week’s losses for the time being. The European Central Bank (ECB) set the reference price at 1.1041 (Friday: 1.1034) dollars.

Oil prices stabilised until the close of trading. Most recently, a barrel of Brent crude cost 62.46 dollars, ten cents more than on Friday. At 57.14 dollars, the price of a barrel of the American West Texas Intermediate (WTI) was at Friday’s level.

The price for a troy ounce of gold got under enormous pressure after it had recovered to approximately $1,467. At the close of trading in Europe, the precious yellow metal is being traded at $1,456.74, another 0.13 per cent lower than at the end on Friday.

Cryptocurrencies got under some selling pressure again on Monday. The top-three digital assets Bitcoin, Ethereum and XRP recorded losses of approximately 2-3 per cent. A Bitcoin is currently valued at $8,780, while one Ethereum costs $187 and one XRP $0.2770.

The world’s largest oil company Saudi Aramco also wants to let small investors participate in its IPO. A share of 0.5 per cent of the company is to go to small investors, according to the stock exchange prospectus published on Saturday. After the IPO, the government has a holding period of one year before it can sell further shares. However, the 600-page prospectus left open the total number of shares to be sold.

According to insiders, one to two per cent of the company could be put on the market. With an estimated market value of up to two trillion dollars, this would be the largest IPO to date. Aramco would be worth twice as much as Microsoft, currently the company with the highest valuation, and seven times as much as the largest listed oil company Exxon Mobil.

Chinese company about to purchase of insolvent British Steel

The Chinese Jingye Group has entered into contract negotiations for the purchase of the insolvent British steel producer British Steel. The government announced this in London on Monday. A deal, however, is still dependent on some matters, including the lack of approval from the responsible supervisory authorities. Contract negotiations for purchase of British Steel with a subsidiary of the Turkish pension fund Oyak had previously failed.

Brexit uncertainties, weak demand and high commodity prices had driven the second-largest British steel producer into insolvency in May. The company has around 5,000 employees, many of them which are working in Scunthorpe about 290 kilometres north of London. The steel industry in Great Britain has been on the decline since the 1970s. Since 1997 alone, production had fallen from 18.3 million tons in 1997 to around 7.5 million tons in 2017.

The Australian airline has pledged to reduce CO2 emissions to zero by 2050. “We are doing this out of conviction,” Qantas CEO Alan Joyce said in a statement, calling climate change “real”. Qantas wants to limit net emissions to 2020 levels. Also, around 34.3 million dollars will be invested in the development of a sustainable fuel that reduces emissions by 80 per cent compared to conventional jet fuels.

The Chinese Internet group Alibaba has set a new sales record for the launch of the world’s largest online bargain event. In the first hour of the “Single’s Day”, 91.2 billion yuan (13 billion dollars) had been raised, 32 per cent more than a year ago.