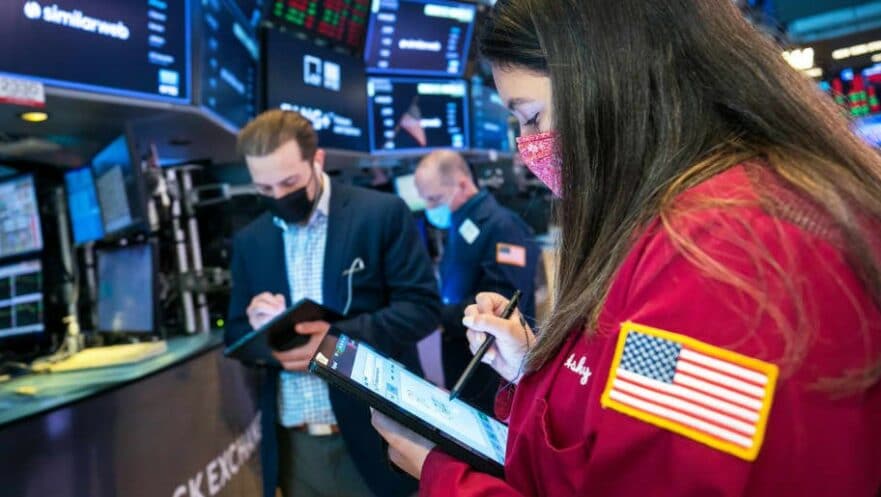 This also happens on Wall Street – hardly any movement in the major indices and thus a restrained start to the week. Nevertheless, it was exciting, with two heavyweights in particular in focus.

Even on a quiet trading day like today, heavyweights like e-car maker Tesla and aircraft manufacturer Boeing made headlines. In the Dow Jones, Boeing shares bucked the trend and extended their gains. They rose by over 5 per cent and were thus at the top of the index. Today, the shares of the European rival Airbus have benefited from reports of new orders on the occasion of the air show in Dubai.

On the other hand, Tesla shares fell again by up to 5.3 per cent to 978.60 dollars but then recovered intraday. Overall, however, they continued their downward slide from the previous week, ending the week down 1.94 per cent at 1,013 dollars.

The US stock markets ended Monday’s trading with slight losses. The Dow Jones searched for direction over long stretches but finally exited trading at 36,087.98 points, down 0.03 per cent. The tech index NASDAQ Composite also slipped but closed only with a mini-decline of 0.4 per cent at 15,853.85 points.

Positive corporate figures were good news for the markets. In addition, the US government allowed the billion-euro merger of S&P Global and IHS Markit, subject to conditions.

However, robust economic data proved to be supportive: Industrial sentiment in New York brightened considerably. The rise in the so-called Empire State Index, an important leading indicator for economic development, was also stronger than expected.

On the markets in the Far East, the most important indices did not find a common direction at the start of the week. In Japan, the Nikkei benchmark index closed at 29,776.80 points, up 0.56 per cent, while in mainland China, the Shanghai Composite ultimately fell by 0.16 per cent to 3,533.30 points. On the Hong Kong Stock Exchange, the Hang Seng closed 0.25 per cent higher at 25,390.91 points.

Positive economic data from China did not provide a strong boost on Monday. Both industrial production and retail sales figures for October were better than expected. However, investors were cautious ahead of the virtual meeting between China’s leader Xi Jinping and US President Joe Biden later in the day.

In Japan, the GDP for the third quarter fell significantly, but this did not dampen the good mood on the market: stock exchange traders were hoping for economic stimuli from the government.

Contrary to the general trend, the European stock exchanges were able to post moderate gains today. The EuroSTOXX 50 was slightly in the red at the opening but was then able to end the day 0.36 per cent higher at 4,386.19 points.

The DAX opened the session with little movement. In the course of trading, it made some gains and at times reached a new all-time high. At the end of today’s trading, it was still 0.34 per cent higher at 16,148.64 points. Meanwhile, the TecDAX moved in a narrow range around the zero line after starting trading slightly lower. It ultimately lost 0.13 per cent to 3,894.96 points.

Overseas and Asian data provided little impetus, but the slight decline in oil prices was seen as a positive. Overarching support came from the ECB today. Bank chief Christine Lagarde reiterated that an interest rate hike in 2022 is very unlikely. However, she did not want to get involved in speculation about the key interest rate in 2023.

Another reason for the optimism of European investors came from the foreign exchange market. The euro continues to weaken and is trading at 1.1364 dollars in US trading, its lowest level since the summer of 2020. The robust US economic data and Ms Lagarde’s statements pushed the euro further down.

Meanwhile, for both Brent and WTI, crude oil prices were stable and virtually unchanged compared to Friday.

Similarly, the price of gold remained stable at $1,863 per troy ounce.

Many of the top cryptocurrencies lost some value on Monday. As the current number one in the crypto space, Bitcoin dropped 1.8 per cent to $63,700, while Ethereum lost 0.7 per cent to $4,575. Binance Coin decreased by 2 per cent to $635, while Cardano (ADA) and XRP shed 0.4 per cent to $2.02 and $1.18, respectively. Most other major altcoin projects also declined by 1 to 5 per cent, while Shiba Inu and Tron (TRX) were the only gainers amongst the top 30 cryptos.

Japan’s economy contracted in the third quarter due to weak demand at home and abroad. Compared to the previous quarter, gross domestic product (GDP) fell by 0.8 per cent from July to September, as the Japanese government announced on Monday based on preliminary data. Annualised GDP thus declined by 3.0 per cent. The decline was thus higher than experts had expected. According to the figures, the drop is mainly due to lower exports and the continued weak demand from private households. Many economists had expected a somewhat smaller decrease in GDP in the world’s third-largest economy, ahead of Germany.

In China, the situation in retail trade and industry surprisingly improved somewhat in October. Growth in fixed-asset investment, on the other hand, continued to weaken. According to government data released on Monday, retail sales increased by 4.9 per cent compared to the same month last year. That compares with a 4.4 per cent rise in retail sales in September. Experts surveyed by Bloomberg had on average expected the growth rate to fall to 3.7 per cent. The situation is similar for industrial production. Industrial production rose by 3.5 per cent year-on-year in October, 0.4 percentage points more than in September. Economists had expected an average increase of three per cent. In contrast, the increase in investments in fixed assets continued to weaken. By the end of October, they rose by 6.1 per cent, after a plus of 7.3 per cent at the end of September. Experts classified the figures at least as a stabilisation of the economic situation.

Foreign trade in the eurozone continues to develop cautiously. While exports declined in September, imports increased. Exports fell by 0.4 per cent compared to the previous month, seasonally adjusted, as the Eurostat statistics office reported in Luxembourg on Monday. In contrast, imports increased by 1.5 per cent. Therefore, the trade surplus decreased further: it fell from 9.7 billion euros in August to 6.1 billion euros in September.